It seems churlish to say, but for a little while there in the ’00s, Hollywood horror movies got really… mean.

In spite of Kevin Williamson’s injection of post-modernist humour, the ’90s weren’t a vintage decade for the genre, at least, not in the West. This was kind of surprising, especially considering the pre-millennial tension that grew palpable over the decade. Generally, this manifested itself more urgently in action movies or sci-fi thrillers, which certainly got a dose of the apocalyptic. But horror movies laid low, waiting for the hubbub to pass. Then came back, with a vengeance.

It was actually the combined efforts of a few French iconoclasts and the rising popularity of Asian ‘extreme cinema’ that gave birth to the American fascination with so-called torture-porn; itself interconnected with a spate of reimagined exploitation and horror classics. Everything is cyclical. While the American studios backed a few emerging names like Eli Roth (Hostel) and Leigh Whannell (Saw), they also leaned hard on the remakes, plucking anything with an established fanbase for a new, nihilistic make-over. Romero and Craven favourites were greedily plundered, along with a host of slasher mainstays. To the letter these remakes were pretty atrocious, from The Texas Chainsaw Massacre on through to A Nightmare On Elm Street and every Prom Night and The Hills Have Eyes in-between. But there were exceptions. Zack Snyder’s re-imagining of Dawn of the Dead remains the best thing he’s put his name to, for instance.

And then there’s Jaume Collet-Serra’s underappreciated remix of House of Wax.

House of Wax was always an outlier during this trend; its quaint antecendent considerably older and tamer than the other choices. André de Toth’s ’50s original is a pleasurable, rather campy Vincent Price number, sold on the gimmick of 3D (ironically just around the corner again at the time of Collet-Serra’s take). It didn’t really fit the criteria. But Collet-Serra’s movie gave the material quite the comprehensive overhaul. In the process, he made – in my eyes – the most successful of this run of shrewd Hollywood offerings.

Revisiting the film – which I do with, frankly, shocking frequency – it feels like the most self-aware of this trend, engaging with its audience and commenting on its audience from casting through to the very soundtrack selects. House of Wax doesn’t just bring its conceit up to date; it date-stamps it. It is the most 2005 it could possibly be. We’re piped Interpol, Prodigy and My Chemical Romance. Collet-Serra’s young Americans are obnoxious and privileged in a manner by then synonymous with horror trends, and – as reality TV really took hold of tabloid culture – it had the gall to feature America’s tackiest darling; Paris Hilton.

The film’s lead, Elisha Cuthbert, was well-known for running around the outskirts of LA in TV hit 24, but Hilton – relegated to mid-supporting – is the most iconic star of the show. She isn’t great, and her character amounts to little more than meat for the grinder, but her very aura of ineffectual celebrity brings a particular mood to the movie. She lingers around the group’s ad-hoc campsite like an emblem for their trivial, mollycoddled existences. 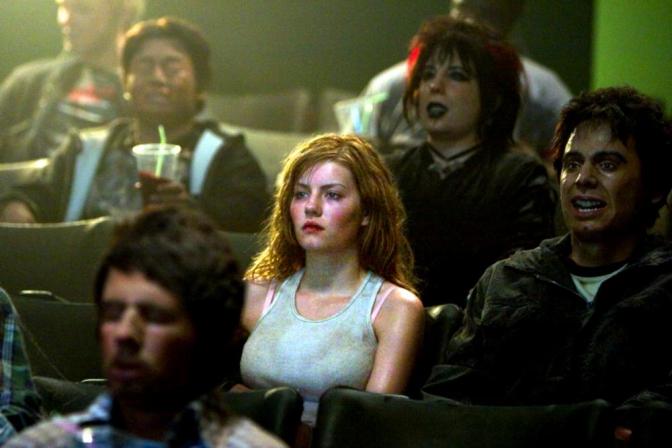 Having been marooned in the country on the way to a football game – they don’t even have tickets – Carly (Elisha Cuthbert) leads a largely offensive bunch of bratty beauties into a ghost town. One-by-one these twenty-somethings are lured and set-upon by Bo Sinclair (Brian Van Holt) and his physically deformed twin brother Vincent, with some of them tortured and turned into living waxworks for the antiquated family attraction that stands imposingly over the rest of town.

From the off there’s a sticky-hot aura reminiscent of Tobe Hooper’s original The Texas Chain Saw Massacre. You can practically taste it when poor Carly falls into a pit of rotten offal and waxwork parts in the first act – the event that leads her to change into the obligatory white vest-top that was the ’00s Final Girl outfit of choice. The pit recalls the cannibalistic BBQ of the Sawyer clan – dizzy with flies – and draws Collet-Sera’s flick closer to that classic’s sensibility than to Vincent Price and his moustache-twirling. Right after this, Damon Herriman’s ‘Roadkill Driver’ is like a knowing inversion of TCSM‘s hitch-hiker, Edwin Neal; marking out prey for the Sinclair boys.

Unlike most of it’s remake brethren, Collet-Serra’s flick manages to build a sense of dread for what’s to come in spite of how honestly unlikable most of it’s characters are. But then torture-porn differs from most horror subgenres. It would prefer you didn’t like it’s cast too much; you’re supposed to root for their grizzly, protracted demise. Again, Hilton’s casting becomes key. Her glamour-puss persona was already established in real life. Early on her character, Paige, gives boyfriend Blake (Robert Ri’chard) a blowjob while he drives them toward their doom. The second act closes out with Hilton’s head impaled on a phallic shaft. It’s a hateful, misogynistic death that plays like the mutilation of a living Barbie. But then, torture-porn’s politics were always quite grimly conservative.

House of Wax is also a blunt-force indictment of the class divide in America; city folk versus country folk. Affluence vs. poverty. In its nihilistic pressure-cooker nobody is really given a reprieve. The middle-class youths are entitled and embittered, vulgar and belittling. The country-bumpkins are the crudest of caricatures, steeped in traditions long eclipsed by progressive sensibility. There’s no way for these two parties to interact peacefully. Carnage is inevitable. It’s a very ‘Dubya’ US of A out there. 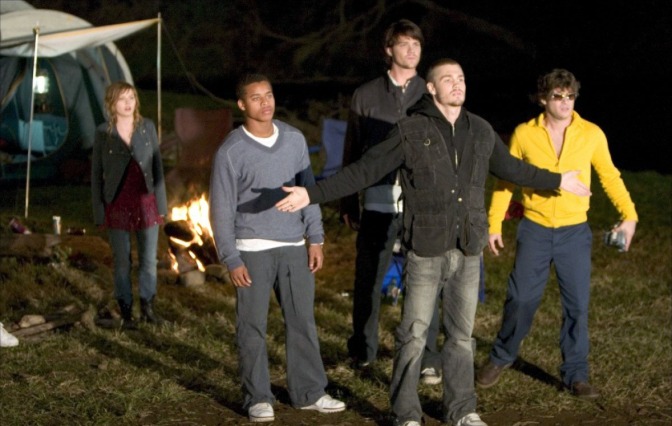 Come the end – with the temperature turned up so high as to melt the literal wax house – House of Wax becomes virtuoso in its gothic monstrosity. At it’s most meta and critical of the viewing audience, the central museum posits torture-porn as little more than a shrewd attraction, one that ultimately deserves to be melted down, but not before consuming its obnoxious target market – that’s YOU, sitting there enjoying this sick filth, you shit. Pretty ballsy of a film to flip it’s viewers the bird like this. Cuthbert’s Carly – a genuinely nice person, it seems – earns a reprieve for her kindness of character. That she loses a finger along the way attests to how even the innocent aren’t beyond injury (it also provides one of the film’s ickiest moments).

Collet-Serra has continued a successful career in genre filmmaking, going on to the delightfully doolally horror Orphan before hooking up with Liam Neeson for a series of nutty action thrillers that have typified his last decade. The Shallows showed a slight return to his horror roots, and provides hope that he’s not fully abandoned nasty little rides like this one. Like him or loathe him, he’s one of the most dependable filmmakers currently bringing genre hi-jinks to the masses. House of Wax remains, for me, an essential time capsule and critique of an exceedingly specific cultural phenomenon.

But, dropping the pseudo-intellectual brouhaha, I enjoy it more simply as a go-to heatwave movie. It’s itchy and restless and bad tempered; the way I get when there’s no breeze and it’s too warm at night. Expertly staged steaming hot trash that’ll help me out of a bad mood. I don’t often subscribe to the idea that horror movies help us vent our pent up negativity, but in this case it might be true. My favourite hate-watch, but one that I also happen to love.

So long, and good night.

One thought on “What About… House of Wax”