I keep thinking about M Night Shyamalan. Putting aside its now-notorious twist ending, what hit home on first approaching his debut film The Sixth Sense was the palpable atmosphere of dread and the tremendous confidence you felt behind the camera. And the commendable level of restraint. A run of diminishing returns has somewhat corrupted it’s legacy, but it’s worth remembering what a chilly southpaw The Sixth Sense was. Robert Eggers’ The Witch lands with many of the same characteristics, and has quickly been hailed as one of the 21st century’s finest horror films so far.

It’s the 1630s. Banished from a prosperous New England community, father William (Ralph Ineson) leads his family to an isolated life in a nearby glade where they build a home and start farming corn. But the land appears blighted. The crop is no good. It’s an inauspicious start, doubled down on when, seemingly out of nowhere, eldest daughter Thomasin (Anya Taylor-Joy) loses infant baby Sam. Matriarch Katherine (Kate Dickie) becomes unhinged. Religious fervour in this already pious clan intensifies. The family threatens to tear itself apart. But the trigger of their conflict comes from without; a dark presence in the woods that bends events to its odious will.

The Witch tantalisingly skirts any outright exposition of the events that take place in and around the glade. Everything the audience needs is there to build a satisfying narrative through-line, inferred rather than made explicit.  Eggers makes bold moves early on, giving the viewer snatches more information than the characters are afforded. As such this isn’t so much a masterclass in escalating tension, but rather in perpetuating it.

Credit then to Eggers for achieving this even as he keeps his supernatural elements out of frame for long stretches at a time. Principally this is accomplished by playing the horror aspects off against a riveting family drama. Ineson and Dickie are dependable in their roles, but the revelations come from the less seasoned players. Harvey Scrimshaw is a brilliant discovery here as middle son Caleb; a guilty but inquisitive eye on his sister’s blossoming bosom as he already starts feeling the weight of young adulthood on his shoulders. But then there is Taylor-Joy’s intense turn as Thomasin. She has the perfect skin and deer-in-headlights eyes of Zoë Lund in Ms. 45 but backed with the tenacity of Michelle Williams circa Meek’s Cutoff. Her work here should open plenty of doors. This is a starmaker.

The aforementioned familial friction is given extra dimension by the dogged use of period-specific language. This may prove a thorn in the film’s side for some, but, like the faultless production design, it lends an authenticity to proceedings that pays dividends. You believe in The Witch. And as the film shows, belief is a powerful thing. 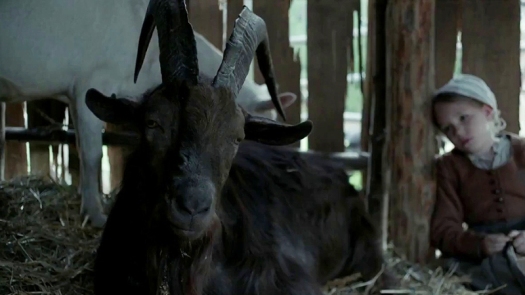 Symbolism is rife. A prevalence of eggs and hares suggests Easter and rebirth, but the surroundings this family find themselves hemmed in by are wrought dour by Goyer-esque imagery and the relentlessly grim atmosphere. Certainly the theme of rebirth holds water, as characters either reveal themselves or transform as the situation intensifies. It’s no coincidence either that fertility is strongly evoked by these visual cues. Thomasin is entering fully fledged womanhood. Repressed sexual desire will out, and is preyed upon for at least one particularly uncomfortable development.

In terms of the basic set-up, Shyamalan came back to mind again as The Witch echoes, in some respects, the terrific first hour of The Village. Now, that film came undone in a mishmash of far-fetched twists, but Deakins’ photography along with the director’s industriousness created an immersive and threatening mood. Eggers may not have consciously set out to one-up Shyamalan, but he has. The oppressive mystery of The Witch is thoroughly compelling. What’s more, Eggers sustains it for the duration, ensuring he has a pay-off worth the time invested.

He is helped in no small part by the astonishing sound design, not to mention that score by Mark Korven. The music in The Witch is genuinely terrifying. A groaning mix of scratches, saws, drones and eerie choral passages reminiscent of the monolith scenes from 2001: A Space Odyssey. It’s a mini-masterpiece. Eager to reflect on the film, I downloaded the music and lay in bed listening to it as I attempted to drift off to sleep. No such luck. Even without the images it is harrowing.

And while The Witch eschews cheap jump scares and may disappoint gore-hounds, it still manages to be very, very disturbing. Awful events happen out of the blue, or escalate with surreal intensity. Eggers has scratched into his film a number of indelible images that come directly out of nightmares. One involving a crow will be particularly hard to shake.

It’s interesting that the design of the film’s title card separates out the ‘W’ in witch into two ‘V’s like this: The VVitch. On one level this could purely be an aesthetic choice, but in doing so it identifies a word within the word; itch. This movie is an itch. It’s uncomfortable in the extreme, preoccupies you, is almost impossible to let alone, try as you might. There were plenty of noisy interruptions in the screening I attended, but in spite of this the film never shook it’s vice-like hold on my attention.

Even now it begs to be scratched further. Eggers has landed himself an incredible calling card with this debut, one which lives up to the hype it has brought with it across the Atlantic. One can only hope that Eggers is not waylaid or diluted by Hollywood’s almost inevitable embrace, nor compelled to recycle these tricks ad nauseam. In short, let’s cross our fingers that he doesn’t ‘do a Shyamalan’. The same goes for his lead actress Taylor-Joy. If she keeps making choices as interesting as this one, we’ve got some treats in store. In the meantime, get yourself to a screening of this dark, deliberate, lingering folk tale. It’s an instant classic.