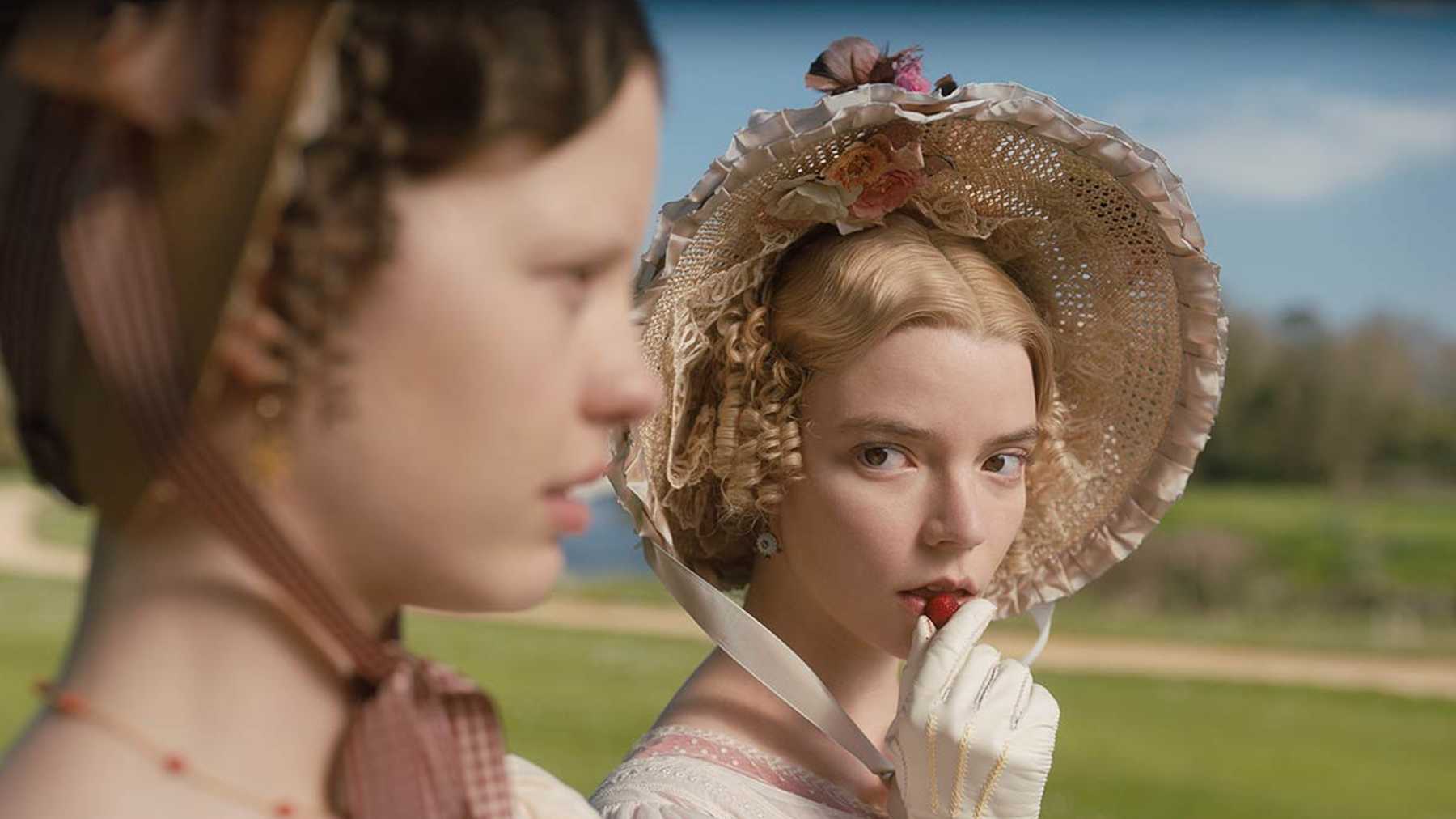 Given her appearances in the likes of High Life, Luca Guadagnino’s Suspiria and The Cure For Wellness, any sighting of Mia Goth in the advanced previews of a movie now leads me to automatically assume it’s going to be a weird/dour pressure-cooker experience where everything’s liable to go full-tilt crazy at a moment’s notice. But fear not! The curse of Mia Goth may have been lifted! Autumn de Wilde’s Emma. (with a full stop, for some reason) is the exception to the rule. Although, by even half way through this fluffy fourth cinema outing for Jane Austen’s matchmaker, you might well find yourself wishing for the raw insanity that usually follows Ms. Goth around.

de Wilde’s name is brazenly emblazoned across the promotional materials for Emma. but, for the majority who don’t know, this is her feature debut following a string of apparently high-profile music videos. She clearly fancies herself as a brand in the making, and her Austen adaptation occasionally tips favour to the likes of Wes Anderson in its stuffy, flat frames. But it’ll take a little more than this to fully endorse her to the world at large.

Austen adaptations have fallen out of favour a little since their boom in the ’90s, though granted Whit Stillman’s wonderfully crafted Love & Friendship remains a recent highlight. Emma. won’t be joining it. Still, it is hard to grasp what it is that’s especially at fault with the film as it disappears like mist from the memory. And I’ve not long left the cinema.

The titular Miss Woodhouse is portrayed by Anya Taylor-Joy, and it is very much her film to lose. Taylor-Joy wowed in Robert Eggers’ The Witch and has since put in a clutch of well-handled supporting roles along with the occasional box office misfire. But she has the talent. de Wilde taps the qualities she shares with silent movie stars, in particular those large eyes which dart knowingly about the place encouraging the audience to share in her wit, her glee, her schadenfreude.

Emma as a character is one of Austen’s many crafty young women of privilege, whiling away the tedium of high society playing matchmaker, and thinking herself rather good at it. But this mild comedy finds her uprooted from her usual grace and skill as a number of couplings come undone before her eyes. And, all the while, there’s the trifling matter of her own romantic future; something she vocally denies interest in. The one person to call her on her frequent meanness and arrogance is Mr. George Knightley (Johnny Flynn). Accordingly they spar, and naturally – because them’s the rules in romantic comedy – they are destined to fall for one another.

On the peripheries are a roster of Austen’s regular fodder, ranging from the aforementioned Mia Goth’s endearing, goose-waddling Harriet to Bill Nighy’s exceedingly wearisome take on Emma’s father, Mr Woodhouse. Nighy nearly torpedoes the entire venture himself, bringing nothing to the table save for the urge to leave it. Elsewhere, Josh O’Connor looks uncomfortable in the role of Mr. Elton and there’s always Miranda Hart’s Mrs Bates to laugh at… that is until Emma herself causes a commotion at her expense during a sunny afternoon picnic.

de Wilde’s picture looks the business, thanks to production design that seems insistent on making her movie seem like a literal fondant. The interiors, costumes and banquets are all exactingly arranged in pastel colours, making Emma. feel like an excursion to the most lavish of patisseries. The movie itself is like a cupcake. Sweet and saccharine, light and easily consumed… but hardly filling.

No risks are taken and, really, no rewards given. At least Clueless re-positioned the source material in a way that attempted to engage more with a modern audience. Which is not to say that all Austen adaptations need to be injected with American sass, but rather that – if we’re honest – Emma is one of the more trifling, flimsy novels in her career, and making much out of it isn’t necessarily an easy task.  What might’ve seemed like a safe bet hasn’t turned out to be the case.

It isn’t that Emma. is bad (though Nighy certainly is), its more that its so instantly forgettable. And if that full stop is meant to suggest that de Wilde’s is some kind of definitive version, it’s been applied with the kind of bold sloppiness that Emma herself would employ. Self-congratulatory, but ultimately mistaken.