We’ve seen the abject cruelty of man rendered on our cinema screens in any number of severe, extreme, button-pushing films. Films like Salò. Films like The Painted Bird. With stifling austerity we’ve witnessed reflections of our worst instincts and actions, and the films themselves have been decried and praised and argued over.

Cristi Puiu’s Malmkrog indirectly asks whether these things are any less shocking when they are simply described, so that we, in the audience, are invited to flood our mind with imaginings of torture, murder, genocide. Arguably imagery more vivid that any conjured by cinema’s most notorious rogues. The conundrum is fitting for a film that deals, constantly, in questions of perception and philosophy. It is a defiant and labyrinthine journey, unfurling in a series of long conversations over a daunting 201 minutes.

Set at the turn of the last century within a manor house in some unspecified Eastern European locale, we bare witness to members of the social elite – the bourgeoisie – discussing and debating everything from religion and morality through war and politics. All the while, in the peripheries, the serving staff remain diligent and above all silent. For all the pontificating of their ‘betters’, they don’t utter a word. A social commentary all of its own.

Even divided into chapters, the prospect of a 3 hour, 21 minute film of intellectuals endlessly pontificating might sound intolerable, but there’s an undercurrent of tension here that survives and even accentuates the theories and opinions banded back and forth. The first two hours of the film both end with characters dropping to the ground suddenly. Moments of calamity and shock.

At first, it is Olga (Marina Palii) who faints. Has she grown fatigued from endurance, or is she wrought low by the inherently fascinating exchanges? Exhausted or overwhelmed? Either way, it brings about a sense of imbalance. It’s a foreboding moment, especially as it is followed by a relatively mute half hour section in which a member of the staff is implicated in a member of the upper class’s ill-health. One senses that all this talk is, ultimately, unsustainable. The dying breaths of the 19th century, even.

The house itself comes to feel like a cage, and the longer these people talk ineffectually, the greater their obsolescence becomes. It brings to mind some of the more notorious works of Bunuel – The Exterminating Angel and The Discreet Charm of the Bourgoisie in particular – in that it renders privilege as a kind of mausoleum. These people talk of war but have no experience of it outside of such intellectual exercises. Here swords are hung on walls as decorative ornaments, never to be parried. There are ironies to what passes as good taste. A member of the group can detail atrocities committed by Bashi-Bazouks of the Ottoman army, but another is reprimanded for referring to lower class citizens as ‘yokels’. What’s considered polite seems flighty, yet nothing is held in higher regard by those gathered.

Puiu’s very indulgence brings to mind another notorious European touchstone; Marco Ferriri’s 1973 film La Grande Bouffe in which a collective of similarly well-to-do persons shutter themselves in a luxurious house and eat themselves to death. Is the same thing happening here? Only instead of food is it the very privilege of their standing that our subjects are goring upon? Talking themselves into the grave, achieving nothing?

Outside, the grounds are encased in snow, conjuring the idea of rigor mortis. This sense of limbo is furthered at the end of the second hour, when a surprise event is made all the more intriguing by what follows… more of the same. 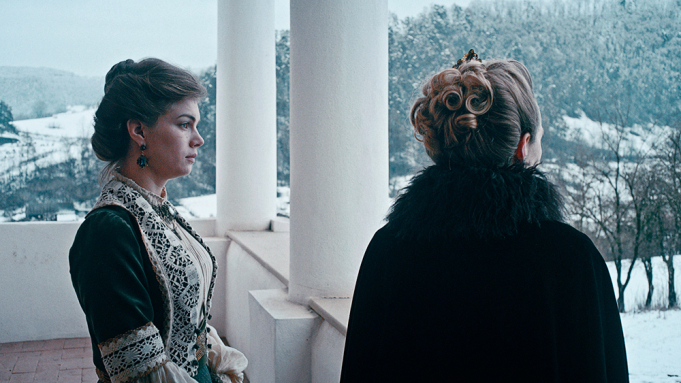 Puiu’s decisions with his camera are exceedingly deliberate. When to hold still, when to cut and most of all, when to pan. The film becomes so still at times that a well-timed sweep to the left or right wrenches us out of our revelry (slumber?), reminding us that there is someone curating this experience after all. At the other end of the spectrum, the second ‘act’ of the piece includes a scene in which the camera is afforded 360 degree movement, pivoting from a fixed position as the action crosses its path and it moves to keep up. Here we feel the most ‘inside’ the film as we possibly could. Yet still distant, like a body-jumping interloper from Brandon Cronenberg’s Possessor.

Another recent cinematic touchstone is worth noting; Albert Serra’s Liberté, which has similarly divided audiences and tested attention spans. Where that film showed us exiled libertines indulging their hedonistic whims in the gloom of a forest, Malmkrog might be viewed as the very thing they are rebelling against. The intellectual conversations that occur around tables and in drawing rooms here are interesting in and of themselves, but they also feel masturbatory and indulgent, warranting the film’s engorged run time in order to be rendered as such. With harbingers of death scratching at the corners of the film, one senses doom in every pregnant pause.

I might even go further and suggest that you don’t have to keep up with the discussions if you don’t want to. They’re all worth it, but maybe you can pick and choose. Maybe what’s said isn’t the point at all. Maybe the whole is telling us something else about these people, their standing and their time.

Malmkrog may not exhibit the atrocities of humanity, but it manages to feel as stern, rigorous and unflinching as any of its notorious forebearers that didn’t flinch at rubbing our faces in the shit. It’s a film that seems to make people angry, mostly out of frustration and boredom. To this viewer, such reactions seem like idle dismissal or a refusal to engage in a deliberately provocative piece that is never less than riveting. I even wonder if those quick to throw out this film aren’t agitated by how oddly disturbing it feels without ever bowing to shock value. So much to ponder…