Larry Cohen made cheap, dirty, gritty films. Not the kind that got a lot of respect on release (or, in most cases, later on for that matter). They were often genre pictures that belayed a scabrous social critique. His most popular and irreverent might be The Stuff, a campy and sprawling horror picture with naff special effects that delivered a disapproving swipe to American consumerism in the 1980s. A couple years earlier he made the lesser known or loved Special Effects; a film which now strikes a prescient cord and reveals itself as hugely influential on a number of our present set of button-pushing filmmakers.

Few directors caught the scuzz of New York like Cohen. Maybe his best rival in this regard is Abel Ferrara. Special Effects shares a star with Ferrara’s finest; Zoë Lund. Lund didn’t make many films before her career was tragically cut short, but her wide-eyed expressiveness and supermodel charisma anchored a scattering of incredible performances. Think of her as a latter-day silent movie star lost in an exploitation wilderness, or a forerunner to current rising superstar Anya Taylor-Joy. That’s the energy here.

Lund plays Andrea Wilcox, a wannabe actress and glamour model who we meet fleeing from her troublesome husband Keefe (Brad Rijn). She takes a job working with disgraced filmmaker and all-round sleaze Christopher Neville (Eric Bogosian). Their initial meet quickly leads to mutual undressing by the pool and Neville moves them to the bedroom; an unspoken contract that Wilcox accepts as part of the transactional nature of being a young woman in the movies. The Weinstein/Giuliani comparisons are already starting to chime.

In the opening sound collage, we hear Neville talking to the press about his career. When a journalist asks who his main influence is he replies, “Abraham Zapruder”. It’s a dark, smart-alec answer, but it is revealed to be a sincere statement when we realise that Neville intends to secretly film himself sleeping with and then killing Wilcox. His bedroom is luridly designed; the floor and walls a red sea in which Wilcox immediately seems to be sinking. She catches on to his sick scheme but it’s too late. Neville kills her and films the act through a two-way mirror.

The commentary on the way Hollywood chews up young women for the sake of misogynistic thirst couldn’t feel more caustic, yet it would be decades before the world would truly catch up to Cohen’s confrontational anger here. As Neville, Bogosian nails the predatory arrogance of a man abusing his position of power, taking advantage of and steering the debasement of an already crooked industry. 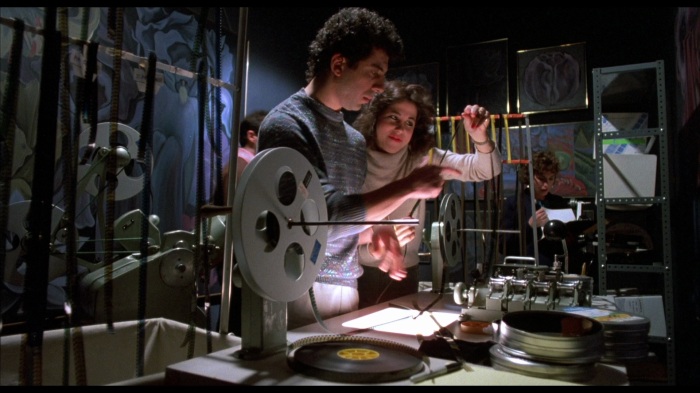 Neville ensnares new widower Keefe in his diabolical plan, essentially casting Keefe as himself as he turns the murder into the centrepice of a new thriller. In a stretch that recalls Hitchcock’s Vertigo or, more aptly given the year we’re looking at here, Brian De Palma en masse, Neville then hires a woman named Elaine Burnstein (also Lund); a dead ringer for his victim to star in the movie in which he intends to insert the footage of Wilcox’s real murder – the ultimate special effect. There’s a queer tension between Keefe and Neville that underscores their joint venture. Keefe isn’t quite as odious as his new director friend, but there’s a magnetism between them that seems to originate in a shared toxicity and mutual attraction. Cohen makes text of this subtext when Neville kisses Keefe in public while they cruise a nightclub for possible leading women. In another scene and underscoring the shallow and disposable outlook when considering actresses, Cohen plants Neville and Keefe amid a vast display of photo resumés as they attempt to cast her.

Cohen shot cheap and fast. Special Effects lacks finesse. In the seedy scene in which Neville washes Wilcox’s body, you can see the shadow of a crew member on the verge of the pool the actors are submerged in. At one point a hand (or is it a foot?) sweeps through the bottom of the frame. You can call it out as amateurish, but its part and parcel of Cohen’s MO. It doesn’t exactly detract from the overall picture because Special Effects exists in a pair of invisible quotation marks. Its sense of reality is strong, but its also heightened. At one point Neville toys with committing another murder with a switchblade knife before dismissing it, “Nah, it’s been done”. It’s almost as though Cohen is prefiguring the post-modernist boom of the ’90s. Instead – and bluntly on-point – he has Neville strangle an editor with a strip of his own 16mm film. Cohen goes further, adding on-screen text intermittently, text that seems intended to add a mockumentary quality, closing with a made-up director credit. The climatic struggle even feels like an acerbic and knowing reflection on the ‘necessary evil’ of re-shoots…

Lund’s spirited double duty here is superb. Her scant roles start to feel more precious because of how commanding she is (granted, I’ve only seen her in this and Ms. 45, but that’s two-for-two as far as I’m concerned). Bogosian, meanwhile, is a revelation; slimy as they come, with a glint in the eye that gives him uncomfortable Big Bad Wolf charisma – something that only underscores how dangerously horrible he is. Bogosian understands that Neville uses his confident and roguish persona as a weapon in his predatory arsenal. But that character is a sociopath. Men and women are tools to him, a means to an end. Is Cohen also snidely chastising and condemning the role of the director?

Burnstein calls Neville out on his sociopathic patter, “You don’t talk to people; you do routines”. And Cohen goes to pains to show that Neville isn’t an aberration in the system. At the same lunch, Burnstein is the subject of a passing agent’s intense lechery when the nameless sleazeball just happens to stop by their table. Its an epidemic. Rife. Normalised.

There’s something vaguely Ballardian about Cohen’s investigations of sex, death and voyeurism here. Maybe that’s only made more potent by the deliberate Zapruder name-drop as Cohen sets his tone. Ballard’s Atrocity Exhibition and Crash were fixated on the assassination of JFK; what amounted to an amateur newsreel snuff film that millions became exposed to. Special Effects could be readily digested as an elaboration of that experience; an exploration of how it was consumed, how it changed the consumer and, at its darkest, the fetishes it subconsciously created.