Horror cinema’s least forgiving subgenre is the found footage movie. Shoestring budgets that often produce huge returns on minimal investments, though the products themselves are often far from satisfying. Often employing non-actors or unknowns in order to sell their fragile realities, a rookie performance can shatter the whole illusion. These flicks live or die on an audience’s ability to suspend disbelief. We know the contract we’re getting into. It’s all fake, but the filmmakers want you to forget that. Of course, this is true of all narrative cinema, but the need for verisimilitude is at its most demanding here. We need to be convinced. As such its very, very hard to get right.

I’m not a huge fan of these movies because of the low success rate, but they’re interesting to dive in to every now and again. I recently chickened out of playing through Slender: The Arrival on the PlayStation yet again. That game – based on urban folk lore that grew out of the internet – has the aesthetic of a found footage movie; the screen is the camera frame and it distorts whenever the titular menace is near. I may have bailed from confronting the notorious Slender Man, but it prompted me to go back a step to the movies that inspired it. These were my choices:

Starting out with probably the most famous example, and it’s easy to take The Blair Witch Project for granted following the slew of movies that were made in its wake. It’s hard to express to those who weren’t around at the time how much of a strange and unprecedented phenomenon this release was, predicated on one of the most successful viral marketing campaigns in cinema history. Watching the film today with all that cast aside, it’s a remarkably atmospheric experience, building immense tension and dread with commendably limited resources and very little seen. Sánchez and Myrick allow the audience to do the hard work, grafting a sense of escalating paranoia with the aid of some really quite wonderfully calibrated performances from Heather Donahue, Michael Williams and Joshua Leonard.

In spite of it’s critical drubbing and disappointing box office, Adam Wingard’s belated 2015 sequel Blair Witch isn’t to be sniffed at. It may be a little cornier in places (and arguably it shows a little too much), but the third act is a veritable ghost train ride of set pieces that boldly/weirdly suggests the whole phenomena might be… aliens?

Manspreading douchebag Jim (Bryce Johnson) wants to make a Bigfoot documentary and ropes in his patient girlfriend Kelly (Alexis Gilmore) to assist him. Having driven around a number of Pacific Northwest tourist spots, they delve into the Trinity National Forest only to be rather unpleasantly surprised in the night. Goldthwaite starts things out warm and cheery, and even the early events in the woods have their comic relief (raccoon!) amid the myriad warnings to TURN BACK, but things do take a turn.

Goldthwaite has a bit of an uphill battle from the start – the concept of Bigfoot is sillier than it is scary – but this is a nimble and often light-hearted little movie that still has one or two tricks up it’s sleeve. Gilmore outshines Johnson, but then that’s half of the point. Less a movie about a mythical creature, more an essay on the foolhardy pursuit of fame, and the kind of square-jawed American egotist who would wear the khaki shorts pictured above.

I still have a lot of time and love for the first two installments into the V/H/S franchise; a series of mumblecore-style horror anthologies framed as a catalogue of eerie discoveries found by burglars ransacking an old man’s house. As is often the case with portmanteau films, not all segments work or suit all tastes, but the pick’n’mix approach laid the groundwork for a number of up-and-coming filmmakers to show off their ideas. In this first film, particularly, David Bruckner steals the show with his “Amateur Night” segment in which a group of lowlife frat boys encounter a non-human threat while crudely trying to orchestrate some amateur porn. Bruckner has just been handed Hellraiser to reboot, and has another great segment worth checking out in the Southbound anthology. Meanwhile, Matt Bettinello-Olpin and Tyler Gillett show the kind of promise they would later capitalise on with their stomping eat-the-rich joyride Ready Or Not.

The wrap-around sections of V/H/S – easily the most degraded and harsh to view – are shot by (and star) Adam Wingard, who had already made the superb You’re Next (though V/H/S scored a wide release first). He and his writing partner Simon Barrett went on to further success with The Guest before returning to found footage with the poorly-received Blair Witch.

Predating The Blair Witch Project by a year but nowhere near as well-known, The Last Broadcast is as much mockumentary as found footage film. Nevertheless, it’s an interesting watch. It lacks the sense of shrewd cash-in that dogs so many of the films that appeared in the wake of TBWP and, latterly, the Paranormal Activity films. Instead it cleaves closer to the unsettling and believable vibe of something like Lake Mungo or The Poughkeepsie Tapes (if only the latter had better acting).

Documentarian David Leigh (David Beard) takes us solemnly through the case of two internet TV stars who went looking for the mythical Jersey Devil in the New Jersey Pine Barrens only to wind up dead, seemingly at the hands of their on-location psychic, Jim Suerd (Jim Seward). The mysterious arrival of ‘previously unseen’ footage defines the second act of this creatively orchestrated film. That said footage requires restoration allows for a convincingly crude aesthetic, pixelated and prone to discolouration. Where so many found footage films struggle because they look too well orchestrated, The Last Broadcast fairs better precisely because of how ugly it is. Leigh’s narration skirts dangerously close to comic parody, but this remains an overlooked chapter in the found footage subgenre. It’s sitting on YouTube. You can watch it for free. 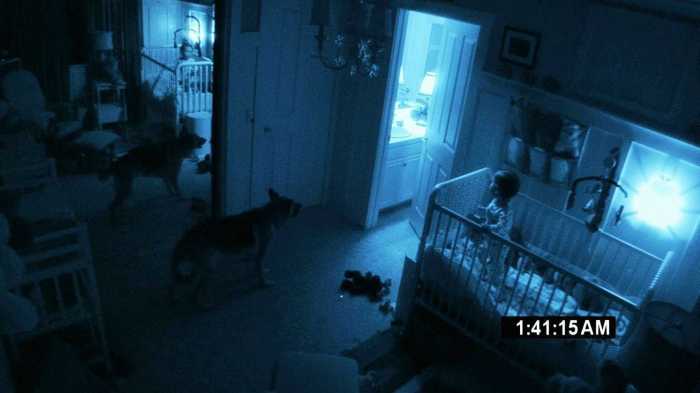 Conventional wisdom dictates that the two entries in this series worth your time are the first, 2007’s Paranormal Activity, and the third, 2011’s Paranormal Activity 3. Ever the contrarian, I’d like to point toward the title sandwiched between these installments. I was personally unaffected by the first movie, spawn of a sensation that never quite felt warranted. PA2, however, somehow got me more invested.

The phenomenon here was predicated on a very simple idea – the use of CCTV to make the audience play editor with their eyes. A sustained shot takes the place of many as we shift our gaze from corner to corner of the frame, eager to spot any spectral movements. A lot of the time we’re denied anything. Then occasionally – BOOM – a noise or inexplicable event provides a short sharp thrill in the conspicuous emptiness.

PA2 keeps things minimal for a long time, but there’s a little more variation than in film one. Film three loosened up the formula; more thrills, but it lost the sense of humdrum reality. PA2, therefore, is the sweet spot (and the only one to get me questioning bumps in the night). The characters are perhaps the series’ least obnoxious, the situations more suspenseful, the paranormal activity just paranormal enough.

Quite what the evil entity’s fixation with the pool cleaner is, though, remains a mystery to me.