Two films into his career, and you get the feeling that Ari Aster is working through some shit.

Anyone who caught last year’s Hereditary will have already guessed two things; 1) Aster is interested in the extremes of the grieving process and 2) he has a thing for cults. Midsommar doubles-down on both these preoccupations. To the point that it feels as though Hereditary was a litmus test to get you through this movie. Midsommar is, if anything, more ambitious, but this also proves to be its downfall in some ways. Aster throws a lot of ingredients into the mix this time, but not all of them need be here.

It starts astonishingly. Where last time Toni Collette was his nexus to trauma, here he has rising star Florence Pugh as young Dani. The film’s stifling pre-credits lock her in frame in a run of scenes as claustrophobic as the halcyon days of J-horror. Dani suffers a family tragedy hard to imagine. It comes at a vulnerable time. Dani and Christian (Jack Reynor) are in the midst of a confused breakup, both parties struggling to make a break from what seems like a co-dependent situation. Exponential grief becomes a tool for Dani. Whether she means to consciously or not, she weaponises it in order to hold on to Christian… and she follows him on a lads’ trip to Sweden.

It is here that the film closes ranks (much as Hereditary did), isolating its group of central characters in a snowglobe of verdant forestry. The purpose of the trip is for mutual friend Pelle (Vilhelm Blomgren) to introduce Christian and his peers to his family’s secretive “hippie-ish” cult secluded in the country’s idyllic wilds. Josh (William Jackson Harper) wants to use the experience for the basis of his uni thesis. What follows is 2+ hours of drug-addled paranoia and increasingly bizarre rituals. It could be a good trip or it could be a bad trip. Unfortunately, each member of the gang brings something toxic or unwelcome to the party. What follows is, at least partially, their own fault.

For roughly half its running time, Midsommar is a barnstormer. Aster uses his camera as an invisible group member, roaming fields with Dani and Co as they take mushrooms and butt up against unusual and sometimes extreme customs. He makes us feel involved in their discoveries. At other times, he and director of photography Pawel Pogorzelski go out of their way to perform stylish visual sommarsaults. The group’s arrival in Sweden is coupled with a outré shot of their world literally being turned upside down. Aster also enjoys manipulating his images. The picturesque woodlands undulate woozily through the drug-enduced odysseys.

Through all of this a new conversation emerges. Midsommar conjures memories of Lars Von Trier’s Dogville, and how that movie played as an essay on American arrogance. Imperialism comes under the hammer. Mark (Will Poulter) is the most obnoxious member of the group (of course he vapes) and his disregard for his surroundings culminates with him literally pissing on holy ground. Elsewhere, Christian and Josh find themselves vying for the approval of the elders… but only so that they can both exploit the cult for their own gains. It is only the suspicious and wounded Dani who approaches every new situation with an open pair of eyes, even if what she sees is sometimes shocking.

Dani is incredibly vulnerable to notions of family, and the sect in which she finds herself actively seems to be contorting and reforming the concept in front of her. In that sense – and with their white outfits – they recall the Guilty Remnant from HBO’s The Leftovers. In all other senses, however, Aster uses the commune to delve hard into wacky folk horror, and this is where some of the movie’s problems really start making themselves apparent. 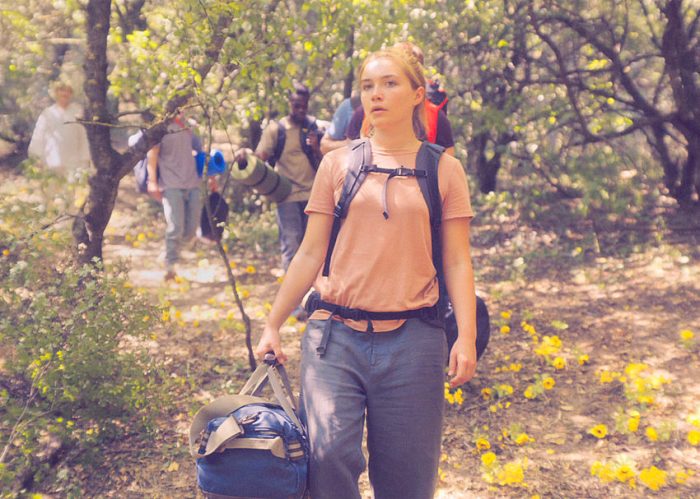 The final third of Hereditary escalated wildly into hysteria. Aster seems keen to repeat that strategy here, but instead he wants to tease it out for as long as he can muster. The result, though, often feels like he is consciously trying to engineer his own legacy. Just as Lynch over-egged his own weirdness for Wild At Heart (resulting in one of his least satisfying pictures overall), so Midsommar races toward “weird for weird’s sake”, with outlandish scenes stacking up as the director dares his audience to blink. More isn’t always more.

In the process, many of the conversations Midsommar had started with the audience become a little lost in all the noise. Dani’s bereavement becomes a bit of a crutch for her acceptance of extreme experiences, while a number of off-screen fatalities rapidly shut down other avenues of interest. Lars Von Trier returns to mind. Aster feels like he is rummaging in a similar toolbox of shock tactics.

The artistry involved in the making of the film is without question (production design award nominations please), but the point of the thing becomes obfuscated. As folk clichés pile up, it becomes trickier to distinguish Midsommar from other movies about freaky-deaky religious weirdos. The film’s perspective shifts to a more closed-minded standpoint. It joins its shocked visitors in pointing and laughing (or screaming).

Which is a bit of a disappointment when the attention to detail in the design and depiction of the piece is so, so beautiful. Pugh nails it, again (if you’re new to this young actor, find Lady Macbeth, like, today). But one can’t quite shake the sensation that Aster is rushing through his career and might already have hit self-parody.

Midsommar is a glorious folly. Dazzling, audacious, and absolutely one of the year’s must-see-at-the-cinema experiences. But its also frustrating and indulgent; a masterwork that falls apart in front of you. Time for a change of tack.