There are, personally speaking, plenty of reasons why Spider-Man Homecoming has been the Marvel title I’ve been least interested in catching for quite a while. Chief among these, I suppose, is a sense of fatigue with a junior league superhero I’ve actually barely spent any time with. It seems as though Sony have consistently struggled with the character. Certainly the stuttering, premature reboots with Andrew Garfield didn’t boost my confidence any. And while Tom Holland’s sprightly debut in the middle of Captain America: Civil War dosed that film with a welcome sense of levity, the proposition of such zaniness for 2+ hours had me weary at the thought.

Well, I was wrong. In a very similar vein to Ant-Man (another Marvel title which suffered a crisis of confidence), Homecoming is something of an unexpected delight, zipping into the upper tier of Marvel titles, one that also goes some way to addressing one of the series’ longest running flaws.

Mercifully we’re spared yet another run through the origin story, and a fun home-video recap of Peter Parker’s exploits in Civil War at the top of the picture brings viewers briskly up to speed. In a little bit of a chronological stumble it’s now been 8 years since the alien attack on New York in Joss Whedon’s 2012 Avengers movie. Tony Stark (Robert Downey Jr.) – in partnership with the government – has been handling the clean-up, leaving numerous ‘little guy’ contractors out on the scrap-heap. One such small-time nobody is Adrian Toomes (Michael Keaton), who has taken this snub to his livelihood personally. In the intervening time he has been working around the law, collecting ‘exotic’ debris and building his own set of armoured suits and weaponry.

Enter Peter Parker. Invigorated from his first skirmish with the Avengers, we find him eager to relive those thrills. The film picks up where Civil War left off for Peter, with Stark playing the absentee father role; encouraging young Peter, but setting him limits before routinely bailing. He even hands him off to general dogsbody Happy (Jon Favreau). Parker is itching to grow up, however, and so loses sight of his academic responsibilities in favour of spending his evenings playing vigilante in his native borough of Queens. It is in this capacity that he stumbles upon the shady dealings being perpetrated by Toomes.

As with your traditional superhero set-up, there are two sides to the character; the masked savior and the man behind it. Homecoming does commendable duty servicing both sides. When he’s out webbing up the town it’s a proficient (though not technically remarkable) CG-enhanced caper. The action and editing occasionally stutter into mild incoherence, but overall it does the job. It’s also pleasing to find Marvel operating on a smaller scale; an especially welcome breather seeing as Homecoming is sandwiched between the galactic lunacy of Guardians Vol. 2 and the forthcoming Ragnarok.

When the film scrutinises the life and choices of Peter Parker, it plays more like a chirpy little indie. There’s a rambunctiousness to the soundtrack, blasting the youthful energy of the Ramones at you, but the performances seal the deal here. Holland is giddy as Parker, excited by his own abilities (the zeal of adolescence and discovery of course, right down to all that sticky webbing), but director Jon Watts and the six(!) credited screenwriters have built a small universe of characters around him that could happily retain viewer interest even if the Spider-Man persona were excised from the film. Usually screenplay writing by committee like this sets off major alarm bells, but Homecoming feels remarkably coherent. It strikes a very good balance. One senses that Watts is more at home with the chirpy high school material, but it affords these scenes a sense of wealth where they might otherwise have played as restless filler.

Homecoming also routinely pokes fun at the genre itself, in effect making this movie a slightly more straight-laced variant on Kick-Ass (and for my money a lot better). The masterstroke here is that the two sides of Spidey become interestingly woven together midway through the film with a smartly played reveal. Which brings us to Michael Keaton. 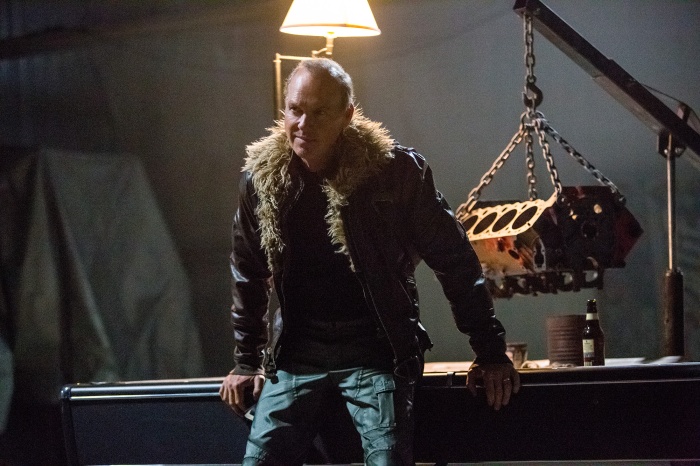 If there’s one criticism that the MCU has been guilty of time and again it’s the trite, underwritten bad guy. Christopher Eccleston in Thor: The Dark World. Mads Mikkelsen in Doctor Strange. Who even was that guy in the first Guardians Of The Galaxy? Loki aside, the series has been criminally disinterested in its villains, giving them one shade and letting that be the tale. Guardians Vol. 2 went some way to addressing that, but still fell numbingly into cliché. Homecoming is the best attempt yet, and it’s down to Michael Keaton and the writers. Adrian Toomes is allowed to be a person. We get to know his home life. What’s more, we’re allowed the opportunity to empathise with his motives. He could have been given more screen time, granted, but Keaton does much with what he’s given. Despite the monstrous parts of his character, we’re put in the position whereby we also don’t want him to outright fail. It affords this small-scale story actual stakes that, say, Age Of Ultron failed to muster with all of its gargantuan set pieces.

And while it may not be the most dynamic movie of the ongoing series, it’s one of the most consistent and – in keeping with Parker’s own youthful zest – one of the most immediate and resonant. It’s a small moment, but one of the background characters in Peter’s life casually mentions going to a protest (something her teacher encourages as patriotic). Protesting what? It’s unclear. But it’s interesting that the universe has accepted civil disobedience as a part of modern living. Toomes’ frustrations with the indifferent rich also chimes in on the broken promises of Trump’s America. It’s not pushed too far, but Homecoming sees Marvel chiming in on real world unrest. This deft touch is more than welcome, for now, but it’d be interesting to see it emboldened in the future.

Still, for now this is a modest, well paced piece of summer fun. It’s comfortable in scale, funny throughout and it affords its characters a wealth of humanity. In a summer conspicuous for its glut of awful blockbusters,  I do enjoy a pleasant surprise.