Robert Pattinson is the new Batman (*cough* best choice since Michael Keaton *cough*) and here he is in a new sci-fi film. Are his days in the wilds doing small pictures for indie darlings a thing of the past?

Fuck no, they’re not. High Life is the first English language film from French auteur and highbrow mainstay Claire Denis; one of the most respected directors in the business for her sensual, challenging work. Her take on the genre is as uncompromising as that of Jonathan Glazer’s, whose 2013 masterpiece Under The Skin similarly spotlighted a famous pretty face, leading audiences down horrifying blind alleys. Denis works the same dark magic here. This is a film that takes no prisoners and is mesmerising for it.

The future. Monte (Pattinson) toils aboard a coffin-like spacecraft in deep space. He tends a verdant garden, he mends the outside of the ship, and he looks after a baby; his only companion in the endless void. Among these activities we find him coldly ejecting his entire crew into outer space, all of them already dead. Denis lets this extended intro play out like the spreading of jigsaw puzzle pieces, in keeping with her visually dexterous approach to storytelling. Brief snippets of narration and extended flashbacks then flesh out what’s led Monte to this point. But only so much. Denis expects her audience to pick up the pieces as well.

You’d call High Life minimalist if it weren’t so giving. The void of space often contains no stars, only emphasising the sense of dislocation and loneliness. There are two astonishing sequences that occur in the vicinity of black holes. The approach to visual effects in both instances are boldly original. Denis’ work has long felt akin to that of a painter. She uses the canvas in similar ways. The main intent is to evoke. The tools change.

But then there are moments when High Life erupts into violence and mayhem. All crew members aboard are former prisoners from Earth, exiled on a mission of no return. Among them and acting as leader is Dr Dibs (Juliette Binoche), who is using the trapped microclimate of the ship for her own ethically corrupt experiments to create new life between her fellow inmates. She has conjured a strange pressure cooker situation of sexual potency. It’s not for nothing that her fellow crew members call her the “shaman of sperm”. Binoche has rarely seemed so predatory. She takes the film by the throat even as she insidiously fucks it. 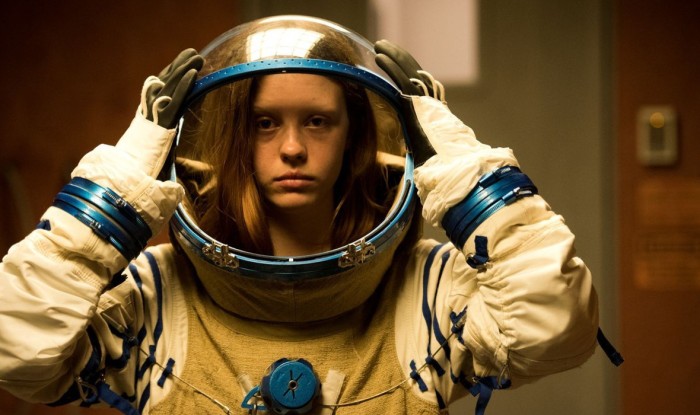 There are three rape sequences. They are close together and they are extraordinarily different from one another. One is a violent, devastating knife to the gut; rupturing that sense of unease so effective conjured, like Denis is over your shoulder whispering, “I told you so.” The other two are more unusual, worth commenting on but equally better left unspoiled. Troubling in other ways.

This is uncomfortable, confined viewing. Denis wants us to feel like a prisoner, too. Better yet, she wants us to feel unborn; a foetus. The term ‘mothership’ is apt here. The spacecraft in High Life has different areas akin to internal organs. The overgrown gardens are the lungs. Dibs’ medical bay is the brain. The sleeping quarters are the heart. The ship even has its own sex; a vivid and threatening nook openly referred to as The Fuck Box. Like a body, the ship is redolent with fluids. Spit, blood, semen, breastmilk; all are expelled during this woozy wet dream of a film.

There are echoes of other great directors in here. Denis very occasionally nods to the formalism of Kubrick in 2001. Earth scenes shot in Poland bring to mind both Tarkovsky’s Stalker and Solaris. A fixation on scar tissue brings to mind Cronenberg while the garden is pure Silent Running. And yet even while these road signs are visible, Denis drives past them into her own void. Her own sensibilities prevail. This is her film and it is a true original.

High Life stands in stark contrast to Denis’ previous film – Let The Sunshine In (also starring Binoche) – instead reverting back to the themes evident in 2013 thriller Bastards. An undercurrent of sexual malaise threads both films together, and it feels like we are being taken on a safari of lusts both dangerous and taboo. Denis is clearly interested in the lines between desire and danger; the irrational side of human nature that is willing to break codes of behaviour in order to achieve what it wants. There is also a sense of rebirth. In her own twisted way, Dibs is trying to make amends for something horrific in her past, while monk-like Monte finds salvation of a kind in the dark incubator that is the spacecraft. The film ends in uncertainty, but with hope for new beginnings. It feels as though, having been suspended in Denis’ womb, we are sliding down the birth canal into a devastatingly bright and unknown new world.