Any way you slice it, remaking one of Rainer Werner Fassbinder’s classics is a ballsy move, whether it comes from a place of reverence or not, and few films in the German auteur’s filmography are as revered as 1972 chamber piece The Bitter Tears of Petra Von Kant. It shouldn’t be terribly surprising to anyone familiar with François Ozon that this film and this director are of some importance. Fassbinder’s imprint – his taste for melodrama and celluloid queerness – is fractally mirrored throughout Ozon’s work. Still, such a bold act of codification gives pause. This would be very easy to fuck up.

Revisiting Fassbinder’s film afresh the day before seeing this upped the ante further. The acidity of the original was made newer. The claustrophobia. The poise. Going into Ozon’s gender-swapped reimagining, these elements initially seemed disarmingly absent.

Where Fassbinder shot in 1.37:1, boxing his characters in, Ozon allows more space, delivering a period-set remake at 2.35:1. And while a good half hour shorter, Ozon’s effort feels more spacious because of this. Wide shots are literally wider. There’s more breathing room for the characters. Fassbinder’s boxes often piled them elegantly on top of one another in the confines of the film’s singular setting.

Where Petra unspooled the life of a fraudulent, fading fashion designer, Peter takes its cinematic reverence to heart and reworks the character as a film director. Denis Ménochet’s Peter is a little harder to pin down, initially. While his diary is as tellingly sparse as Petra’s, one senses that he remains relevant and active on the world stage. If you squint your eyes Ménochet even has some physical resemblance to Fassbinder here, and it appears Ozon has modeled the character a shade more closely to it’s creator – a man well-renowned for his volatile private life.

The opening mirrors that of Petra precisely; it’s protagonist awoken by a telephone call, barking a demand for freshly squeezed orange juice from tight-lipped and loyal assistant Karl (Stefan Crepon putting a subtly saucy spin on Irm Hermann’s Marlene role). Beat for beat this feels like a literal remake, and when playing things so, ahem, straight, Ozon’s film comes across as a warm if needless facsimile. But as the variances start occurring things get more interesting and Peter Von Kant takes on it’s own personality.

The decision to switch from the fashion world to film is a wise one. It acknowledges a cineaste’s appreciation; the very thing that engendered this remake in the first place. Peter becomes ensorcelled not by a promising young model, but by a handsome young man (Khalil Ben Garbia’s olive-skinned Amir Ben Salem), whom he decides to turn into a star as an expression of his freight-train-sized adoration. Amir, evidently a chancing drifter type, knows a good thing when he sees it, and falls under Peter’s wing for the sake of the success he is fawningly promised.

Making the toxic gay relationship at the core of the film interracial adds a metatextual dimension that strongly recalls one of Fassbinder’s other great melodramas of this period; Ali: Fear Eats the Soul (itself a reimagining of Douglas Sirk’s All That Heaven Allows). That the film should start shooting out tendrils to other efforts in Fassbinder’s oeuvre shouldn’t surprise; the (beautiful) poster for the movie is a riff not on Petra but Fassbinder’s ’80s masterpiece of nautical surrealism Querelle. As with the facsimile wrought by Ménochet’s looks and baring, the gesture overall is larger than just this one movie. 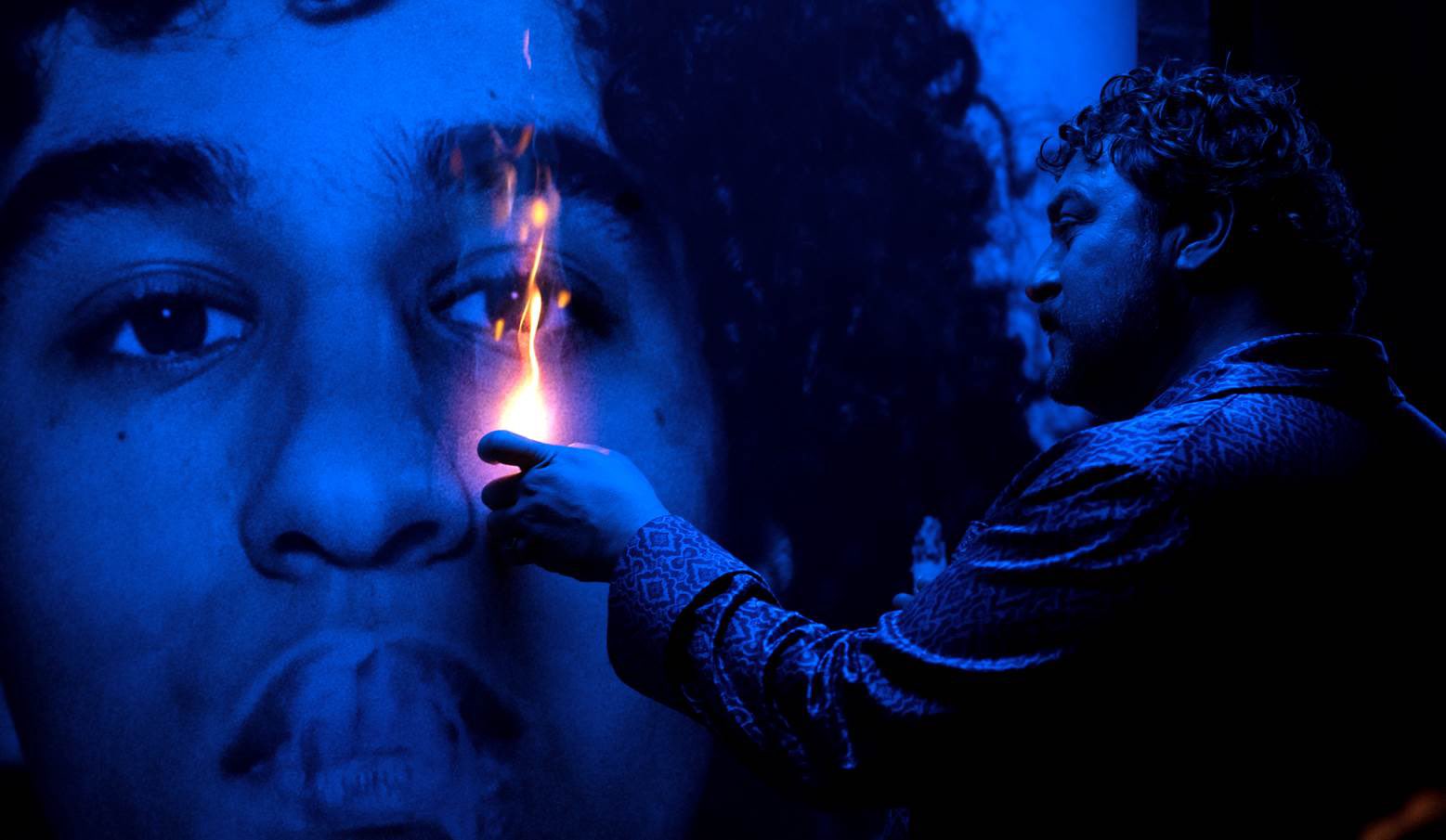 And yet, perhaps unintentionally, Peter Von Kant strongly brings to mind the aesthetics and mannerisms of another, still-present auteur of world cinema; Pedro Almodóvar. It is there strongly in the design of Peter’s apartment, where hot reds are prominent and where sticks of furniture and wall decorations feel like artefacts unto themselves. It feels more modern than the hyper-designed affectations of Petra’s cavernous abode (though perhaps that is the result of the crisper photography). It is there, too, in the wardrobe and lighting choices, which deliberately delineate the story’s chapters into different moods and shades, ultimately ending up in a sea of blues as Peter’s life crumbles around him.

Perhaps Alodóvar is what you get when you cross-pollinate Fassbinder and Ozon; a realm of heightened melodrama and high-camp rendered with devilish glee. That is, effectively, what occurs here. Ozon’s approach has more humour than Fassbinder’s. Or, more precisely, the humour is less caustic, more prone to indulgence and flamboyance. Having Hanna Schygulla pop up as Peter’s mother is a fanciful bonbon and one is thoroughly encouraged to share in Ozon’s delight at having an original cast member co-sign his venture. Still, his ace from beginning to end is Ménochet, who throws himself into the title role with gusto. Its a lively, physical, committed performance. A career highlight for an actor whose resume is significant already.

Where Petra was sketched as a user in some sense getting her comeuppance via her own broad self-destructive tendencies and narcissistic martyrdom, Peter seems more specifically undone by his relationship with Amir. With Petra one sensed a whole host of demons lurking behind the eyes. For Peter it seems more decisively to be his blind love for a boy who represents his own dreams of starting again, of doing it all differently. Come the end of the film Amir’s face festoons every wall of Peter’s apartment, making it appear more like the home of an obsessed fan; the latest in a series of obsessions signposted earlier by the ever-present visage of Isabelle Adjani’s Sidonie. In a key sequence that separates Peter from Petra, Peter has the object of his affection filmed; a recorded moment of intimacy that feels like a prism of Ozon’s own reverence, one that feels as though it will inevitably recur later.

Recur it does, at the film’s blue-hewn climax, where its use is more stirring than expected. Peter traces Amir’s outline as it is projected onto a white sheet, and it is as if he is reaching to pass his cigarette to the visage of the boy now pointedly out of reach. Here, revering his own work, codifying the past, Peter bring mind another classic dame of cinema history – Gloria Swanson in Sunset Blvd. Peter Von Kant may well pale to the power of Fassbinder’s bracing original, but it stretches out in other ways. Feels less hermetically sealed. Because of this it finds its own feet and steps out of the shadows.