In the 13 years since the first theatrical release of Avatar its stock has changed somewhat. For this viewer, those initial encounters (I went three times) and the novelty of the involving 3D technology were a genuinely transportive experience, powered by James Cameron’s broad stroke emotional sweep. The spectacle felt incredible. Incredible enough to forgive the film’s weaknesses. I became a staunch defender of Pandora’s wonder. At least, for a while. But that footprint faded. Revisiting the film on the small screen, its failings – particularly the dialogue and narration – are far more glaring. Yet it still retains a diminished facsimile of the escapist power it once wrought with a pummelling fist. It still has magic.

There’s a lot of talk about Avatar‘s lack of cultural footprint in the intervening years, but its influence on blockbuster cinema is evident, particularly in the muscular bombast of franchises like the MCU. Now, in the wake of so many identikit cinematic roller-coasters, what to make of Cameron’s long-gestated follow-up? Does an Avatar film still have relevance in 2022?

Some years have passed on Pandora, too. Former grunt turned Na’vi Jake Sully (Sam Worthington) has embraced pacifism, and the family life. He and his life-mate Neytiri (Zoë Saldaña) have had three children of their own, and adopted Kiri (Sigourney Weaver), the miracle-birth child of Dr. Augustine’s avatar. No explanation is known or given for her existence. Also under their wing is Spider (Jack Champion), son of the late Col. Quaritch (Stephen Lang), who mostly looks like a kid who washed-out during a junior surfing championship at Huntingdon. Quaritch himself isn’t out of the picture. His memories have been implanted into a new avatar body, and he’s on his way back to Pandora for some government-sanctioned payback.

This and more is presented in a tumble of exposition as rank as any previously employed by Jake, and along with those winsome shots of misty forests, it very quickly feels as though we’ve never been away… but also as though we’ve stepped into a third film in the franchise, so much is glossed over. The mechanics of Avatar: The Way of Water grind onward so that Cameron can get us to what he clearly wishes to centre this time; the harmony and beach raditude of Pandora’s sea life.

The Sully clan take flight for the coastal tribes, and here the film beds down for it’s surprisingly unadventurous storyline; a liberal mix of bits of Free Willy, Jaws 2 and elements of other James Cameron films. A whole host of new Na’vi are introduced on top of the gaggle of children who are now the forefront of the story, and keeping score or even caring recedes as softly as the roles of Jake and Neytiri (Saldaña – who has joint first-billing – has next-to-nothing to do, and winds up with probably less screen time than 11th-billed Jemaine Clement’s sad fisherman). Attention is generally divided between Quaritch schooling his hippie kid and the teen adventures of Lo’ak (Britain Dalton), who makes friends with an outcast whale. 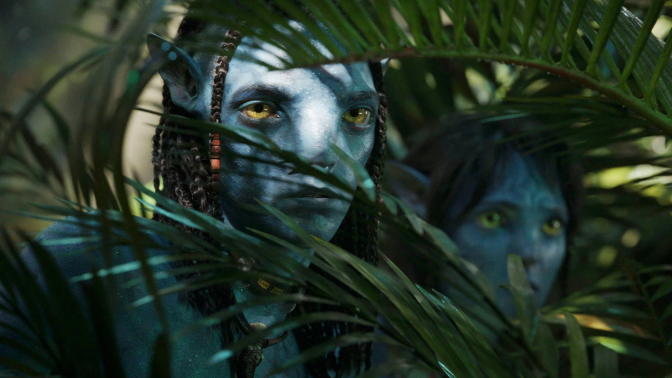 Visually, The Way of Water is a pristine experience, for better and worse. Utilising a higher frame rate, Cameron ensures that his CG playthings retain clarity during swift movement (rather like the motion smoothing that the Currys rep tells you is good). Depth of field is always on his mind. It’s like watching the most beautifully rendered PS5 RPG you could imagine. But it’s also exactly like that, and where last time the emotional through-line of the film carried us, here it feels suppressed, stilted and mostly cliché. And, for a filmmaker so keenly interested in the depths of the ocean, Cameron keeps us strictly within the shallows; something of an unfortunate metaphor for his storytelling skills.

There’s some vaguely interesting new metaphorical meat on offer, but it’s as blunt force as previously. Where Avatar told us deforestation is bad, The Way of Water reminds us that whaling is bad. Cameron dials up his new-age instincts, too, and – with the focus on family a constant barrage on the viewer – boldly ups the saccharine to ensure the film’s widespread appeal across age-groups. The more interesting element – and the greatest reach toward relevancy in the real world – is its empathic take on being a refugee. Through the Sullys the film strives to understand the experiences of the uprooted. Struggles with acclimation, and the kneejerk racism found in what’s hoped to be their new home. Na’vi, it turns out, are pretty human after all.

But as The Way of Water disappoints in its storytelling, the prior novelty of Cameron’s visual odyssey loses its lustre. For all his efforts, his marine world feels soulless and under-developed, and the midsection is happy to coast. One comes to wonder why this is a Pandora story at all; the broad intentions here could have been relayed in an Earthbound drama for a fraction of the cost and with greater audience connectivity. Not for nothing, but I saw The Way of Water with a sold-out audience, and the amount of phone-checking I clocked around me was unprecedented. Whole swathes of those in attendance were simply disengaged.

If Cameron’s good at anything, it’s third act action spectacle, but here it is overlong and stuttering, pocked with good bits stolen from Aliens and Titanic. The Way of Water also struggles to hide its intended place in a longer saga. It feels reluctant to provide any real closure and so set pieces drag, only to whisk away any sense of resolution. Inevitably there will be a cost for the Sully family to ensure that this experience provides an emotional toll, but this too is fumbled. It feels trivial as opposed to seismic. Robotic and pre-programmed into the formula. The least damaging cost-of-doing-business.

This thing will trample down any competition at the box office, especially in its opening few weeks. But one wonders whether it will retain the legs that Avatar had. As mentioned, I went back for that experience over and over, and I certainly wasn’t alone in this. It’s a big part of how the first movie made its legend. With The Way of Water I not only feel no such intention, but ambivalent about even a cursory re-watch (it’s so buggeringly long, and so mawkishly peppered with “bro”s “dude”s and “butthole”s – on Pandora, it’s clearly still 1992).

For all Cameron’s coldly impressive technological bruhaha, the magic is simply missing. What’s left is, at its best, mildly diverting. And while Avatar 3 at least is a certainty, Cameron’s self-assured reign is, perhaps, over.

One thought on “Review: Avatar: The Way of Water”