Chalk it up to the evident autobiographical undertow that steered Marriage Story, but Noah Baumbach’s last outing – while funny – never quite shook itself out of a self-serious register and, visually, a neatness that the director rarely applied previously. With that out of his system and here working instead from source material, Baumbach has shed some of that cleanness that scored so well over the 2019 awards season. White Noise finds him embracing old idiosyncrasies as he ambitiously explores new territories, using Don DeLillo’s novel to examine our collective response to the pandemic; a sense of fleeting near-sighted mortality in the presence of a cataclysmic event. In the process he’s created an existential nightmare that also sometimes plays like a National Lampoon outing. It’s garish, messy, uneven, lurid, awkward, weird and it might be one of his best pictures.

White Noise breaks decisively into three acts. The first establishes the broad strokes of this bumbling, bickering family unit, as well as peripheral peers in Jack’s life at the college, including Don Cheadle’s Elvis-loving Prof. Murray Siskind. A lot of it may seem, in the moment, unnecessary. Most keenly this applies to a highly theatrical and absurdly choreographed sequence in which both Jack and Murray hold court on their disparate passions in a rainbow coloured lecture space. It’s among the first instances where one starts to question the priorities of White Noise. But as it’s wider philosophical themes come into focus – and Baumbach starts making observations on herd mentality – this flowery showpiece gains more weight.

The second act sees a chemical spill create an ‘airborne toxic event’ on the peripheries of the town, leading to a panicked evacuation. Here we find Baumbach playing in a sandbox he’s rarely even acknowledged before; setting off big explosions, deploying screen-wide CG and delving with obvious glee into the realms of Spielbergian adventure and suspense. A shot of Jack simply filling the family car with gas inspires palpable dread. With the family clustered together in the vehicle, White Noise takes a narrative standard and uses it to present some acerbic reflections on how people respond to a looming invisible threat. The parallels to COVID-19 aren’t subtle, but watching the chaos and – more pointedly – the wildfire spread of rumour and disinformation shows how on-the-button DeLillo was with his macabre tale some decades ago.

The third – and seemingly longest act – chronicles the fallout for the Gladneys, as neatly seeded quandaries from the first two acts bubble up to the surface. It is perhaps only here that White Noise draws together its main thesis on our collective and individual terrors in the face of death. The macro and the micro. Our fascination and fixation. It is rendered in a madcap rollercoaster of bravura bedroom dramatics and flows toward a Gilliamesque adventure into the Ohio night as the focus narrows to Jack and Babbette and a mortal threat to their marriage. 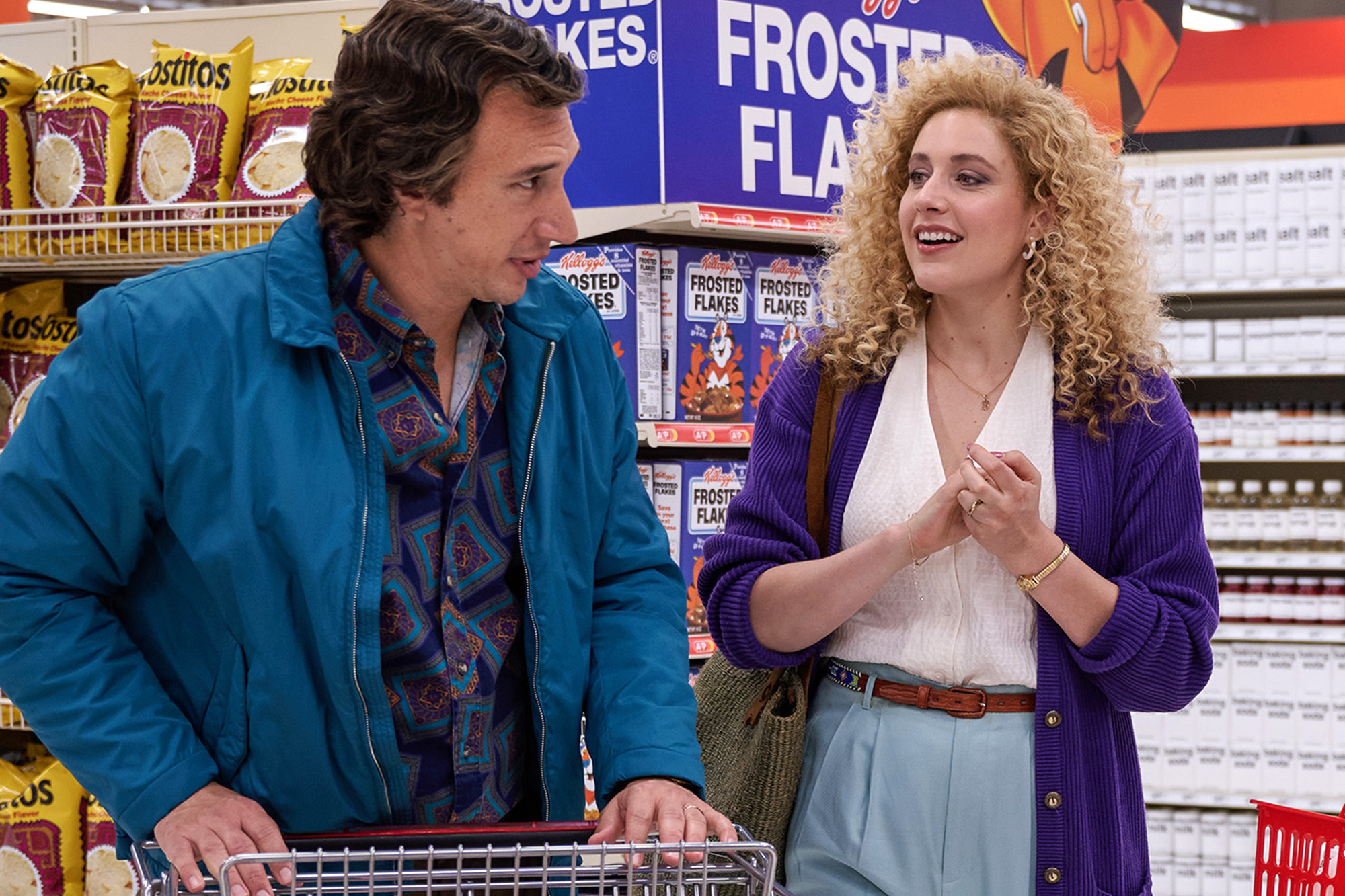 The gaudiness of White Noise – it’s pungent collisions of pink, green and umber – make it seem bold in the relatively muted tones of Baumbach’s recent filmography. This visual soup (which is anything but sloppy) creates a palette as rancid as the gaseous cloud that hangs over the Gladneys. Recurring trips to the supermarket, meanwhile, restore order to the frame; colours are organised and stacked together in neat little boxes, and this communal, commercial space takes on new significance.

And if there is a sense of visual anarchy in the margins of White Noise it is tempered by Baumbach’s instincts for a bold frame in which colour plays its intrinsic part in the picture. I’m thinking of Jack and Babbette caught in silhouette against a pungent green at a makeshift emergency shelter, a static shot of the family station wagon plunging into a cornfield, or the stark simplicity of someone standing precariously on a roof. White Noise‘s visuals are memorable.

DeLillo’s clipped, idiosyncratic dialogue can alienate, especially when Baumbach has the entire family corralled in one space, or when Jack and his colleagues partake in multiple conversations – Altman style – around cafeteria dining tables. But this is familiar ground for Baumbach, whose (secret career high) Mistress America spun similar plates. It runs the risk of making these characters feel inhuman – mere mouthpieces for ideas and conjecture – but that’s a) part of the point; we’re so keen to regurgitate the media, and b) something that Baumbach soothes and counters with sympathetic and recognisable personal exchanges elsewhere. In short? What initially may seem alienating about White Noise is actually what makes it feel special in the aftermath.

And while ostensibly an ensemble piece, there are some great performances in here. Driver and Gerwig are both sensational. Driver may already have the status of Baumbach’s on-screen foil, but that doesn’t stop White Noise standing out as yet another interesting choice for the actor, fast securing his place as one of America’s most daring leading men. Gerwig has less – as is the thrust of the source material – but she holds court when it counts, not least during a tearful bedridden confessional.

This is a strange, strange mix of a movie, but that’s why I’ve come away loving it. So rarely do you find something playing to the crowds that’ll draw from such a dangerously varied set of reference points. One scene can evoke the comfort of ’80s John Hughes, while another is as densely unhinged as Cronenberg’s Cosmopolis. In the negative spaces are the fingerprints of many other luminaries. A dash of Solondz. A whiff of Araki. Weaving these things together, Baumbach is celebrating and creating his own remix of Americana.

Oh, and if you’re watching it on Netflix make sure you’re ready with the remote as it ends because there are two things you’re going to want to do; watch credits and turn up the volume.

One thought on “Review: White Noise”