While the blaxploitation cycle of the early-to-mid ’70s became mired in broad tropes and unflattering (and sometimes quite ignorant) cliché, it’s worth remembering that the movement started out with Black filmmakers at the fringes of the industry making Black films for a Black audience. Feeling unrepresented by the mainstream, films like Melvin van Peebles’ Sweet Sweetback’s Baadasssss Song and Gordon Parks’ crossover success Shaft (both 1971) paved the way for the films that followed. Quickly – and inevitably – the whiter side of the established film industry looked to cash-in on a lucrative market that had been previously held in contempt, if it was thought of at all.

Jack Hill was a white filmmaker, but he had a nose for talent, a track record for producing small pictures on a tight budget, and had seen the potential in Pam Grier while working in the Philippines on two Women-In-Prison movies (The Big Doll House and The Big Bird Cage). Her part in the second notably more prominent than the first. Seeing Grier’s natural screen charisma, she was the perfect fit for a tough crime picture that could cash-in on this new wave of hip, urban movies. Grier took her spot. Coffy (1973) was born, and I’ve written about my unbridled love for that picture some years ago already.

Hill’s writing still fell foul of the growing tropes that the genre was causing to snowball (the increasingly ludicrous, peacocking pimp; women mainly as prostitutes; pushers everywhere), but Grier’s poise and command as a female action hero (itself a revelation at this point in time) allows plenty of goodwill, while Hill’s simplistic but punchy style provided the requisite momentum and immediate thrills. Hill knew how to make the modest seem sensational. And a sequel to Coffy was planned immediately.

That movie became Foxy Brown. It’s the lesser of the two films in many regards, but there’s still ample re-watch value (it’s in my personal top 20 most-watched movies as confirmed on Letterboxd; Coffy is in my top 5), and there are some areas where it betters or expands upon its similarly punchy predecessor. Enough for me to feel fond enough to add it to this rolling series of rambling essays.

Some of the reasons Foxy Brown initially feels inferior are the elements of déjà vu. It’s another LA story. Grier as Foxy once again finds herself seeking vengeance against a criminal enterprise that peddles sex and narcotics. It suffers – as Coffy does – from an ambling mid-section in which its heroine goes undercover as a sex worker to get closer to the bosses. Foxy – like Coffy – winds up getting caught by her foes, and has to use her wits to escape before, inevitably, she wreaks her violent revenge. There’s even the obligatory obligatory girl-on-girl brawl mid-picture. If Hill settled on a template with Coffy he wasn’t keen to mess with it.

Perhaps this echoing is part of the reason the decision was made not to treat Foxy Brown as a direct sequel. An effort to reduce compulsions to compare the two. But while Coffy remains the grittier and more cynical of the two, Foxy Brown offers answers to the problems its predecessor merely addressed.

The question of empowerment is clearly vocalised early on in Foxy Brown. Foxy’s street hustling brother Link (Antonio Fargas) is in trouble with mid-level dope pushers who work for preening bigwig Katherine Wall (Kathryn Loder). One night while hiding out at Foxy’s after she’s saved his life, Link responds passionately to her provocation that he find another line of work. Link talks of his avarice, seeing others with money and success, while he – a Black man – is shut out of the game.

“But I watch TV and see all them people and them fine homes they live in and all them nice cars they drive and I get all full of ambition. Now you tell me what I’m supposed to do with all this ambition I got?”

What starts out as a slightly comical monologue suddenly turns pointed, as Link vocalises the frustrations of a generation. It’s clear he’s talking about the vision of America that the country sells to itself (citing television, the monologue directly calls out mainstream media); a vision that myopically excludes its vast numbers of minorities. The contentiousness of America’s look-but-don’t-touch exclusivity thrums in Hill’s script. Link is clownish at times (“Say, do you know where I can find an all-night men’s room?”), but this impassioned moment speaks volumes and shows Hill’s appreciation for a distinct societal imbalance that Foxy Brown outright challenges.

What is the solution? Coffy couldn’t find one that didn’t also entail a level of self-destruction, but Foxy Brown opens up a conversation about collective activism, in the process tapping into the then-prevalent image of the Black Panthers. While out walking the neighbourhood, Foxy and her former-DEA boyfriend Michael (Terry Carter) witness such activism in action. A street-level dealer is beaten and shipped out of town by members of the local community. This chapter in the film feels somewhat incongruous until the third act comes around. Having been subjected to sexual violence and doped with heroin against her will (in the film’s nastiest diversion by far), Foxy reaches out to this unnamed community group (led by Bob Minor’s Oscar) for assistance with her personal vendetta. The group challenges her motivations and Foxy makes another convincing speech to match her brother’s earlier on; that the wrongs dealt against her and her kin (by this time both Link and Michael are dead) could befall any of them if a clear message isn’t communicated. That, in effect, a line must be drawn.

As such, Foxy Brown makes a strong argument for vigilantism (“it’s as American as apple pie”) and togetherness in the face of oppression. Crucially and convincingly, the police aren’t part of Hill’s equation. As in Coffy, they are ineffectual or easily bought. Hill, again, tapping into a perception that stands to resonate. Tough as she talks, this isn’t just Foxy stringing the group along to get what she wants either, as an earlier notable sequence demonstrates.

While pretending to hustle for Katherine Wall under the pseudonym Misty Cotton (reminiscent on the tongue of Coffy’s sex worker alter ego ‘Mystique’), Foxy befriends down-on-her-luck Claudia (Juanita Brown), whose husband and son are held by Katherine as bargaining chips, along with her own safety. Foxy suggests that they mess around with the clients they’re sent to see to further her own ends. Claudia is game. But while the misadventure is of relatively low-stakes for Foxy, Claudia’s realisation of the consequences of her actions are played startlingly. Brown’s performance in this moment – her hysteria – is large but honest, and undeniably powerful. From this point Foxy makes a concerted effort to help Claudia out of the game. Indeed, Foxy only gets caught because she’s aiding Claudia’s escape from Katherine’s men. Her fate isn’t confirmed, but the last we see is the woman fleeing down an alleyway. One assumes, to freedom. Foxy’s intentions backed up with action.

The film’s finale offers something ‘fresh’, too; a clear demarcation from the shotgun carnage of Coffy. Following an obligatory Sid Haig appearance as dope smuggling pilot and lecherous booze-hound Hays, Foxy and the brothers from the local committee corner Steve (Peter Brown), the posturing but oddly ineffectual lover of Katherine Wall. Their awkward relationship is interesting in and of itself. Katherine tries hard to project power and confidence (and it’s refreshing to find a woman at the centre of a criminal enterprise in a film like this), but her façade is thin. Haughty but vulnerable, Steve (who couldn’t care less) is her anchor; her power is flimsy, if not outright borrowed. Katherine’s feminist authority, therefore, is tarnished, fragile and hypocritical. A weak but interesting antagonist. 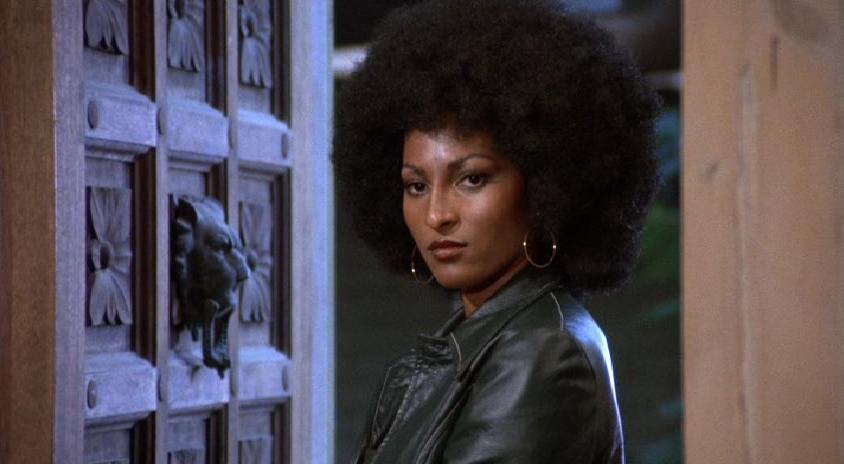 Foxy’s justice for the blood spilled is to spill blood, too, but not for the kill. In a delightfully perverse denouement, Foxy has Steve castrated and then personally delivers the pickled remnants to Katherine, comically hiding a small handgun in her afro (one-upping the razor blades of Coffy). While she has no qualms taking out Katherine’s henchmen with the pistol, Foxy merely wounds the drug-pushing madam, stating that living with her pain – the pain of losing Steve – is a longer, crueller punishment. Foxy walks out and the film ends.

Where does this leave Foxy Brown‘s vigilantism? Does Hill’s film point toward a lawless future in which balance is meted out through violence and dismemberment (or, more importantly, community decision)? Is this a better kind of justice than the extant racist and corrupt police state? Hill asks the question but also suggests his own answer. There’s a subtle but notable swipe against the American prison system to be found earlier in the picture. It’s a throwaway moment right before a scene change, but Link notes that “some of the best people” he knows are in American prisons. Foxy Brown‘s clear racial delineation and strong sense of setting infers the prejudice he’s talking about.

Hill’s familiarity with exploitation pictures and Roger Corman-like nous for what he can sell is all over Foxy Brown. It’s a relatively cheap action picture. Grier’s sex appeal is exploited (the Meyeresque opening titles shamelessly linger on her swaying breasts), and the racist and homophobic slurs that pepper the screenplay are very much of their time. Said screenplay also sticks in these actors’ mouths sometimes. Inelegant moments that match some often unfussy and obviously rushed filmmaking. Hill remained a white man approximating Black idioms, and was as guilty as his peers in this regard.

But these qualities – however shameful to our contemporary gaze – are truthful reflections of the world around Hill. Sexism. Racism. Homophobia. Exploitation. “Modern slavery” as Oscar outright calls it. Foxy Brown is a time capsule, a problematic ride, a lightly provocative film and – as it’s Grier and Hill – a damned good time at the pictures.