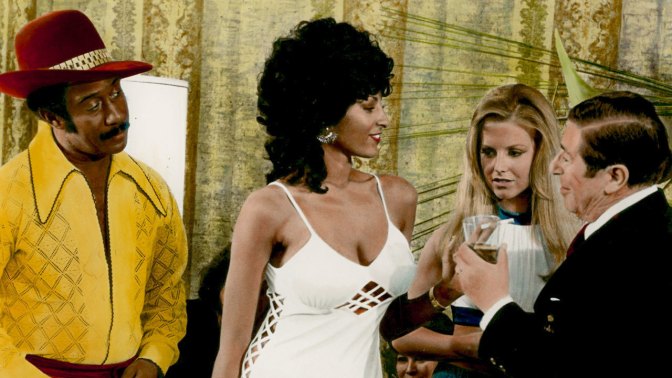 Like a majority of people who have discovered Coffy over the last 15 years, I came to it thanks to Quentin Tarantino. The celebrated movie magpie cast his Rum Punch adaptation Jackie Brown as an ode to the blaxploitation films of the early ’70s, chiefly with the casting coup of Pam Grier. Though this is what we are given to understand, Jackie Brown remains the most formal piece in Tarantino’s catalogue. It’s certainly his most grown-up work. And whilst Jackie Brown is a good film, it shares little of the furious spirit of the movies that purportedly inspired it. Coffy is one of those movies.

Released in 1973 at the height of the ‘blaxploitation’ craze – a run of flicks manufactured to cash-in on the rise in popularity of African-American culture – Coffy feels like a snapshot of its time. A film that could only have appeared with such crackling grindhouse sincerity when it did. A remake would be pointless. Awkward pastiche. For this reason it feels oddly truthful. A document of a time and a mindset, warts and all.

Director Jack Hill had already made a name for himself in B-movie and exploitation circles with a run of drive-in favourites, culminating in the now-notorious ‘women in prison’ films The Big Doll House and The Big Bird Cage. These films had seen Pam Grier’s star rise also. Her looks, presence and screen charisma standing out in a run of movies where little else was as captivating. A move into the blaxploitation scene was almost predetermined. Coffy proved to be the perfect vehicle; the story of a nurse who turns vigilante by night, posing as a prostitute to snare pimps and pushers… then dispatching vengeance, one shotgun shell at a time.

The titular Coffy is dating ambitious politician Howard Brunswick, whilst her cop friend Carter clearly holds a candle for her. When Carter becomes the victim of a beating, Coffy sets her sights on justice for him and for her sister – hospitalised for the effects of heroin addiction. Coffy’s journey for vengeance ultimately leads to revelations too close for comfort, not to mention a number of life threatening encounters. If this all sounds like by-the-numbers action film hokum it’s because that’s exactly what it is. Coffy ticks those boxes and some others. And whilst it’s far from high-brow, it is not without merit. Indeed, Coffy is a worthy and welcome addition to this series of essays.

What makes it special is strange to quantify. It’s quite clearly superior to the very similar Foxy Brown which followed a year later, also from Jack Hill.  Whilst that film is certainly enjoyable, Coffy wins out when they’re compared. In part this is because Coffy is the tougher, grittier of the two. By its final act here, Pam Grier’s character is having to fight for survival as well as for the bloodshed she seeks.  The film is enveloped by night and a heady, intoxicating sense of danger is evoked. As an action thrill-ride, it’s a muscular and gratifying movie.

Coffy is also emblematic of a positive change happening in American cinema in the ’70s. Film in the states was getting political again, becoming a platform for civil rights issues to be discussed. And whilst frank debate of confrontational issues like equality and exploitative drug markets were not about to draw big box office in mainstream cinema, an undercurrent of independent filmmakers were fearless about addressing such topics, wrapping them up in the exploitation film’s lurid dressing. Coffy is actually about things. There are serious inner city problems highlighted here. It’s not a totally ridiculous leap to call films like Coffy the The Wire of their day. David Simon’s hard realism may not have been Jack Hill’s intention, but the problems posed here are every bit as pertinent to the real world. The viewer is left to ask themselves what can be done to fix a broken, corrupt system?

This is not to suggest Coffy is a severe or sombre political statement over all else. Those elements are there, and they enrich the film. Jack Hill’s higher priority however, as ever, is to entertain with a rip-roaring ride of those other things the audience have been promised, and have turned up for; action, violence, sex and thrills. Coffy is happy to deliver on all counts.

Grier herself is as good as she’s ever been. For craft she may not be easily considered alongside the silver screen’s greats, yet her aforementioned presence and charisma pays dividends. She’s simply enjoyable to watch. On these terms she provides everything needed to excel in a role and a film like this. This might sound like an odd comparison, but I often think of her in the same way I do Kurt Russell in John Carpenter’s ’80s heyday. Engaging and defiantly badass. She is a screen icon, as capable as any of her male counterparts. More capable than a lot of them. I love Grier’s strong women and Coffy is one of her absolute best.

It’s also worth mentioning Roy Ayers’ terrific score. I have it on vinyl and it’s a common fixture on my turntable. The blaxploitation films often came with exceptional soundtracks, as some of the best musicians and producers of the time used the vehicle to make subtle explorations in soul, funk and jazz. It’s another layer of what makes Coffy a film I find myself returning to again and again.

Yes, there are ‘better’ films, more ‘laudable’ films. Yes, Jack Hill’s film openly plays on Pam Grier’s looks, it’s salacious story line swerving – just as Foxy Brown‘s does – to place Coffy in sexually exploitative scenarios. But the ferocity of the character and the ferocity of Pam Grier reclaim the film. Coffy stands tall, prefiguring punk’s “fuck you” attitude. Coffy says “fuck you” to sexual and racial exploitation even as it uses them to make its point.

It ends with Coffy walking away from camera, out into the night. I like to think she’s still out there, daring you to take her on.