Living and working in the shadow of David Cronenberg might well be a particularly daunting thing, but son Brandon is gamely stepping up to the task and if the world wasn’t won over by his suitably vile debut Antiviral back in 2012, it certainly seems more inclined to embrace his second roll of the dice. Brandon continues to display a similar set of fixations to those that have defined his father’s career. Here, with Possessor, he pries into the corrosive horrors of losing one’s identity, with a near-future sci-fi piece that sits comfortably within the family wheelhouse.

The idea of a ‘downloadable consciousness’ is nothing particularly new. We’ve seen variations on the idea over the last several decades, from the literary work of Philip K Dick and William Gibson through cinematic milestones such as Mamoru Oshii’s animated masterpiece Ghost in the Shell or even beloved TV like early ’90s favourite Quantum Leap. No one’s putting right what once went wrong here, though. In the world of Possessor, the technology is purposed as a method of untraceable assassination. Killers are transmitted into the host body of a patsy, they do the deed, and are pulled back out at the moment of ‘suicide’.

One such assassin is Angela Roseborough’s Tasya Voss. We first meet her in the flesh in the aftermath of one of her jobs; pulled back into her body and tested for an acceptable semblance of self by her handler, Girder (Jennifer Jason Leigh – cast as a nod to daddy’s own virtual scrambler eXistenZ?). That she is quizzed on her own memories suggests to us that the process takes a toll. That each time Tasya is poured into another body and yanked back, her sense of self takes a hit. Already we’re set to distrust the tech involved.

The meat of the piece – and it is a visceral experience in all senses – comes when Tasya takes temporary possession of the body of Colin Tate (Christopher Abbott) for another hit. The host’s identity is supposed to be suppressed or wiped, but Colin fights back. We’re invited to watch an identity crisis like few others, though the war for head-space brings to mind Leigh Whannell’s fantastic Upgrade from a couple of years ago. 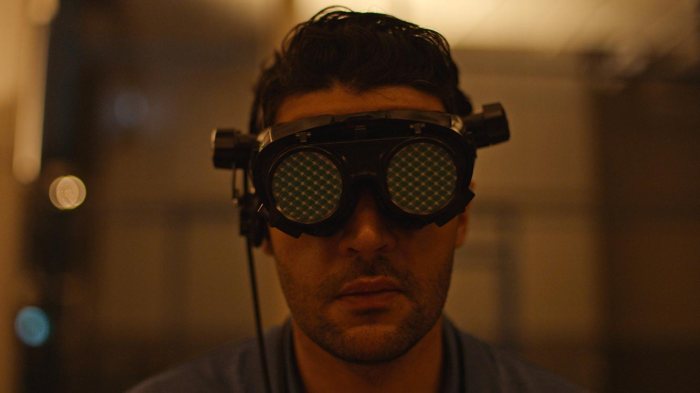 Cronenberg successfully taps into our fears of losing ourselves, and Possessor might even be read as an expression of our collective terror in the face of dementia or Alzheimer’s. Even before encountering Colin, Tasya experiences reality bleeds; waking hallucinations and warped memories that also suggest a level of PTSD. A lot of science fiction sees hope in technology as a means of advancing medicine. Successes of the past and the present exploded into the future. Possessor presents us a newscientific breakthrough that causes deterioration. Cronenberg is having a conversation with us about side effects; the small print of so many experimental progressions. Think about the spraying of DDT in the ’50s, as just one example. Processes certified as safe – or adequately safe – that reveal their downsides over time. These are pertinent anxieties in our collective present, as we all yearn for (and worry over) potential vaccines for our ongoing epidemic.

Invasions of privacy are a constant source of stress here, too. Not only the idea of someone having access to your mind and your thoughts, but the day-to-day scrutiny and data collection we experience at the hands of countless corporate entities. Colin’s job appears to involve gaining virtual access to peoples’ homes to gather data on their furnishings. In the process he is able to witness the most intimate of moments. Though this is presented as mundane, that very banality seems to be Cronenberg’s point. We’ve normalised allowing companies unprecedented access to ourselves. Think about how many times you’ve accepted cookies or terms and conditions without really reading what you’re consenting to. Possessor is about backdoor ownership of ourselves by others, and the insidiousness of these advances.

For his part, Cronenberg is showing increasing prowess behind the camera. This sophomore effort is more successful and engaging than his often scrappy debut, and points toward a promising trajectory ahead. Stepping out of his father’s shadow and carving out his own identity in the cinematic landscape seems like less or a possibility and more of a promise. And, with some of the shocks to the system presented here in mind, maybe even a threat. A gripping dark future awaits.