There are a handful of directors who compete, in my mind, for all-time greatest. Kelly Reichardt, David Lynch, Yasujiro Ozu, Abbas Kiarostami… Abbas Kiarostami. The late Iranian master who, between 1987 and 1994, directed three interconnected films that came to be known as The Koker Trilogy (a moniker he allowed but didn’t coin). The three films – Where Is The Friend’s House?, And Life Goes On and Through The Olive Trees – were not planned as a trilogy, but grew out of one another.

1987’s Where Is The Friend’s House? charts a young boy’s efforts to return a school notebook to its rightful owner, lest the boy get into trouble with his teacher. Our small hero, Ahmad (Babak Ahmadpour), travels back and forth between the towns of Koker and Poshteh looking for his friend as dusk creeps in, travelling by the same zig-zag path over a hill with a lone olive tree on the top. Then, in 1990, an earthquake struck Iran and decimated the region where this first film was shot. Kiarostami himself returned to the scene to check in on the residents who had helped him make his movie. He was then encouraged to make a film of his own efforts.

This begat 1992’s And Life Goes On (also known as Life, And Nothing More). Here, Kiarostami shoots documentary-style, and non-actor Farhad Kheradmand steps into his shoes in front of the camera, playing the film director returning to the scene, witnessing the tragic devastation to the area and the people. He searches for the boys who starred in Where Is The Friend’s House?; a search that is left unresolved. The zig-zag path is glimpsed from the car during Farhad’s journey.

1994 brought us Through The Olive Trees. Kiarostami returns again to Koker to make a film about the making of the second film. He recasts himself again – this time Mohammed Ali Keshavarz plays the film director directing Farhad Kheradmand. The subject of the film, however, is one of the minor actors of And Life Goes On; Hossein Rezal (playing himself). Hossein is lovelorn as he wishes to marry a local girl he has to act opposite, Tahereh Ladanian (herself), who will not respond to his declarations. This film culminates with a sequence which finds Hossein pursuing her over that same zig-zag path.

Aside from how the path itself is a neat summation of Kiarostami’s fondness for angular lines within set frames, it also seems to serve a number of more thematic purposes that richly enhance the viewing of the three films.

For one, it echoes one of the long-running comedic sensibilities found in Kiarostami’s work. He often delighted in stories about a constant back and forth, finding humour in such repetitions. The zig-zag path up the hill compliments the thankless efforts of young Ahmad in Where Is The Friend’s House? on a journey that repeatedly makes him retrace his steps. It’s a visual reminder of the duality of this process; moving forward while similarly seeming to go backwards.

Farhad experiences a similar plight during And Life Goes On. Many of the roads into Koker are blocked or no longer passable thanks to the earthquake. Information that he receives on his quest to find the boys is sketchy. It’s another observation on the farcical nature of searching; hitting dead ends and turning back on yourself.

In Through The Oliver Trees this manifests slightly differently. Kiarostami invites us to watch take after take of the same small and insignificant scene from And Life Goes On, in which Hossein has a few lines. There’s a constant reset and sense of going back on one’s self while still, incrementally, moving forwards. The action between takes is where his other narrative progresses. 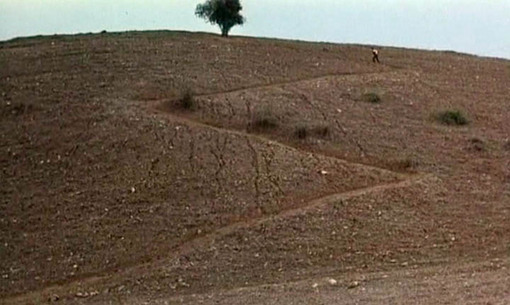 The very nature of these film and how they relate to one another is a kind of a zig-zag, too. Where Is The Friend’s House? is the most traditionally narrative piece of cinema, asking you to believe in its lie – a shared agreement – but then And Life Goes On doubles back on this, by pretending to be a documentary in which the first film exists and was never in any sense ‘real’. Through The Olive Trees acknowledges the facade of both prior films, purporting to be the first ‘true’ film in the series, opening with Keshavarz speaking direct to camera. But what is he saying? He’s telling us the part he is playing. It’s another fake, and out of this stems another more traditional film narrative; the love-lorn romeo. Through The Olive Trees ends with a (slight) return to traditional film storytelling; a boy chasing after a girl. Kiarostami has turned in the other direction again.

Fittingly, there’s a third layer to the zig-zag. Consider the path itself as a metaphor for not only the real-life earthquake that generated the trilogy (exactly how ruptures from a quake would be drawn in a comic book, say), delineating time into before and after (the two sides of the hill), but also as a metaphor for the social and political changes that were happening in Iran during the ’80s. The revolution. In cinematic history, the rise of the Iranian New Wave. There’s another before and after, and the line isn’t straight either. Through The Olive Trees in particular outlines how, in spite of a seismic shift within a culture – be it an earthquake or a revolution – traditions are hard to shake. The women are meek and ‘given away’ to the men. The film subtly outlines the stresses of traditions in a setting which is trying to rebuild. The suggestion being that more than buildings need to be thought over from the ground up.

Hossein himself delivers an uncharacteristically articulate speech about how, for the betterment of all, classes should mix. The rich and the poor. The literate and the illiterate. The lines he sees aren’t straight; they zig-zag.

The zig-zag path is a beautiful image, an iconic one, and one that Kiarostami would return to again (see The Wind Will Carry Us; another incredibly funny film about going back and forth). It joins together these three aesthetically disparate films, but it is more than just an image. It is an integral part of what Kiarostami is trying to articulate.