It’s pretty much a note of permanent record on this little site of mine that, in spite of the blog’s ill-thought-out name, my favourite David Lynch film (and favourite film of all time) is Mulholland Drive. It’s the film that got me obsessing over film. It changed my perspective.

Obsession is accurate, as every little detail within it tends to draw me into a parallel world of conjecture and increasingly tenuous interjection. When I think of the film I am constantly interrupting myself with different questions and information. It’s a feedback loop I can’t – and have no desire to – escape from.

The film came back into mind today as I was completing a little social media time waster, and like a dart thrown from the mind into its dreamy map of Los Angeles, the point struck was the heard but unseen presence of Coca-Cola.

It’s somewhere around the middle of the film (listen to me pretending I don’t know exactly where it is). Naive ingénue Betty (Naomi Watts) has a big audition at a Hollywood studio. She’s even seen rehearsing her lines with amnesiac Rita (Laura Elena Harring). The day of the audition has arrived, and its a little film within the film, forgetting for a brief time the intrigue of Rita’s true identity and where all that money came from. Betty leaves Aunt Ruth’s apartment in a smart grey outfit, chipper as anything that she might just make the big time. She has the talent (as we’ll see).

Rita, of course, must remain indoors. She has a swirl of sinister mystery about her, and tragedy has been foreshadowed by an eerie visit from soothsaying neighbour Louise Bonner (Lee Grant). As Betty heads out the door she turns back and calls to Rita. “I hope I’m back in a couple of hours,” and then inexplicably (and as if to a child), “Don’t drink all the Coke.”

“Don’t drink all the Coke.”

This line has always fascinated me. Let’s dig in. In reductive thinking, Lynch’s women stereotypically fall into one of two or three molds. There are the mystic soothsayers (like Lee Grant here, the Log Lady in Twin Peaks, the Lady In The Radiator in Eraserhead). There are the seductresses (Dorothy Valens in Blue Velvet, both of Patricia Arquette’s characters in Lost Highway). And there are the women who project a 50’s aesthetic of pretty innocence, sometimes sincere (Laura Dern’s Sandy in Blue Velvet), sometimes as camouflage (Laura Palmer).

Up until this point in Mulholland Drive, Rita has been something of an enigma. Not knowing herself, she is positioned as a potential between roles. Her voluptuous beauty and the threat of danger and criminality that surround her are classic femme fatale tropes, so the nearest of the three that she cleaves to is the seductress. The mystery of what befell her has certainly started its work seducing Betty, who relishes the idea of playing detective “just like in the movies”. Rita is demure and feminine, but also carries the potential to weaponise these assets, should she rediscover her identity and confidence. She could be the stronger of the two characters, especially as bubbly Betty pointedly belongs in the Pretty 50’s category, right down to her hair and wardrobe choices in this very scene.

But then Betty says this line about Coke. We’ve not seen either of these women drinking Coca-Cola. Both women are in their early thirties. Having Coca-Cola as their drink of choice in this temporary situation seems frankly bizarre. They are adults, not teenagers. But name-dropping the sugary soda has an underlying effect that changes our approach to the two of them, albeit temporarily.

For one thing, Betty’s delivery of this patronising plea is clearly maternal in nature. She has taken Rita under her wing and in this moment speaks to her as though she is genuinely her ward who doesn’t know any better. It speaks to how Betty perceives herself in the mutating dynamic between them. Secondly – and this seems very knowing of Lynch – it projects a sense of teenage innocence onto Rita that hitherto hasn’t been established. True enough, there’s that panicked zoom toward her at the end of the Louise Bonner scene that makes her seem fragile and childlike – along with the vulnerability of her amnesiac state – but it is this line about Coca-Cola that places Rita closer to the Pretty 50’s aesthetic that has so far been the domain of Betty.

Why does it matter? Well, because once Lynch is through taking us on a tour of Hollywood with Betty, he quickly resumes the noir-ish detective game of who Rita is. Betty and Rita venture out into the world, following up on a lead. Except now, any suggestion that Rita might become the dominant part in the duo appears quelled. Granted, there are other factors, including the paranoia that they’re being followed. But she appears more timid, more girlish than at any prior point in the film. Perhaps coincidentally, she wears a bright red top through these scenes beneath a black cardigan. With her hourglass figure she looks like, well, a bottle of Coca-Cola. 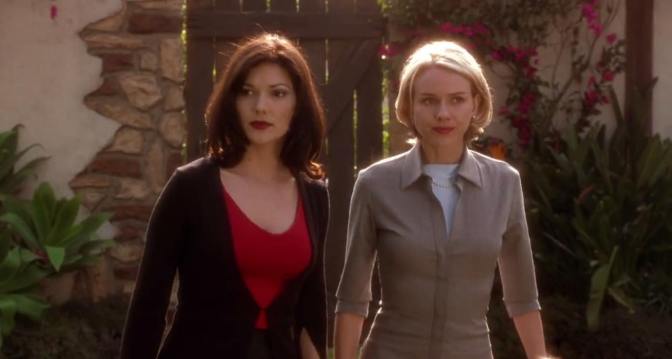 Of course there turn out to be far more layers to both characters, and neither one can ultimately be reduced to a type, especially as reality and identities get manipulated in the final act. It is almost as if Lynch is using his reputation against us here and in service of the film. It just goes to show what a master manipulator of tone he has always been.

Not for nothing, but Coca-Cola makes sense in terms of Lynch’s love of Americana and its shining symbols. Frequently he is possessed of the urge to contrast these things with the darkness and violence in the world that his entire body of work seems dedicated to reconciling.

And then, deliciously, there is a thought that makes a mockery of my own indulgent analysis. Mulholland Drive was once a TV pilot. TV shows require product placement. It could simply be that name-dropping this fizzy beverage fulfilled a contractual obligation put upon Lynch by his former network; something that simply stayed in the finished film. As is so often the case with this darkly playful filmmaker, the answer is out of reach and undoubtedly not nearly as fun as the question.

2 thoughts on “Minutiae: The Use of Coca-Cola in Mulholland Drive”