David Lynch’s love of Billy Wilder’s 1950 classic Sunset Boulevard is well established. He’s cited it in interviews as one of his favourite movies, and time and again its influence rears its head in his work. The road itself makes a cameo in Mulholland Drive. In INLAND EMPIRE he recreates a scene wholesale (specifically the image Norma Desmond sees in a film in her home cinema, as though Wilder had accessed Lynch’s movie through a time warp). For Twin Peaks he lifted the name Gordon Cole from the film, applying it to the character he would first voice and then so thoroughly embody. One might also argue that Twin Peaks is a tale told to us by a corpse; that it is all Laura Palmer’s ever-expanding story, her death intrinsically connected to water as well.

And so of course Sunset Boulevard raises its head once more, here, in Part 15, with its most overt influence in Lynch’s work to date. In our only scene with Dougie (Kyle MacLachlan) this week, we find the man at peace (isn’t he always?) eating a piece of chocolate cake brought to him by his contented wife Jayne-E (Naomi Watts). Dougie becomes preoccupied moving a salt shaker around and then plays with the TV remote. One of his fumblings turns the thing on and, lo and behold, Sunset Boulevard is showing, and precisely the  moment that the name Gordon Cole is referenced.

Holy cow. We’ve seen Dougie coaxed from his somnambulist state before, stirred by mentions of case files or the sight of a police badge, but hearing Gordon Cole’s name triggers him like we’ve not witnessed since the attempt on his life back in Part 7. Dougie responds to Sunset Boulevard and its coded message of Cooper’s past and he ventures forth to plug himself into the mains; sticking his cake fork into a wall socket, electrocuting himself and shorting the fuses for the house as Jayne-E screams.

This might not be the sudden Darwin Awards-worthy mishap it appears to be, but we’ll have to wait to find out. But it’s a rare occasion on which Dougie shows determined motivation. He recollects that he was transmitted into our reality via the wall-socket and, on hearing Gordon Cole’s name, tries to return. It seems to me to be an expression of intent; an all-consuming effort to fuse body and mind once more. I’m reminded of Hawk’s words about electricity; that it depends on the intent behind it. Dougie’s misuse of cutlery need not necessarily have a long-term negative effect.

Elsewhere, Part 15 provided some of the most emotional material of the show’s revival. Lynch goes for tears of both sadness and joy this week, and likely achieves many from both ends of the spectrum. The spell in the middle, meanwhile, is a wasteland of darkness, which we’ll get to later.

We start off with a sequence fans have been crying out for since the show’s first season. Hope for Big Ed (Everett McGill) and Norma (Peggy Lipton) had been all but extinguished. Remember how lonesome and used up Ed looked at the end of Part 13? That wasn’t the end of the story. Nadine (Wendy Robie) marches over to Big Ed’s Gas Farm with her golden shovel to free Ed of his guilt. If you love something, they say, let it go. Nadine lets Ed go and he rushes to Norma at the RR. Lynch gives us a fake-out that these two are still doomed to miss each other, leaving Ed dejected and meditating at the bar. But, as Otis Redding soars on the soundtrack (and as Ed seems to respond to it like a flower to sunshine), Norma slips her hand onto his shoulder. Ed proposes on the spot and Norma says yes. It’s almost too perfect and a moment earned over a quarter of a century. Shelly (Madchen Amick) looks on approvingly. Lynch takes us outside to trees, mountains, the great sky and lets Otis sing out to the universe.

It’s about the happiest moment in all of Twin Peaks. It promises a lot in terms of how the show has the potential to reward as loose ends are tied up in this final push to the end. But, as the rest of this installment evidences, that doesn’t necessarily mean we’ll be provided with answers. More and more I am coming to suspect that Season Three will give a feeling of resolution, an emotional sense of unity, without going so far as to articulate the mysteries that remain at the heart of some of these startling images. 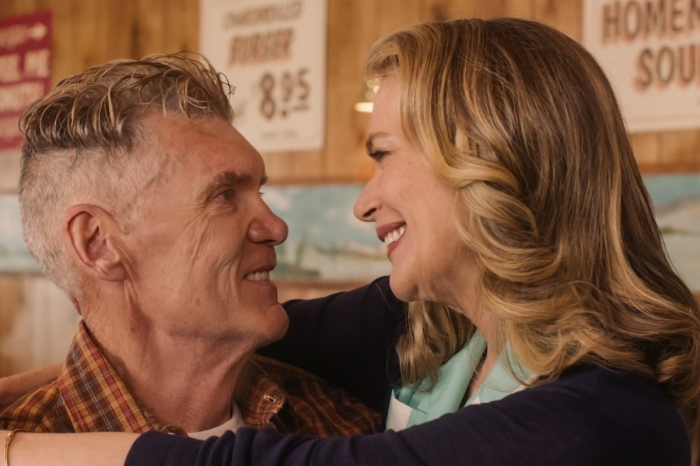 Toward the end of Part 15 – and following an important series of transitions, Mark Frost and David Lynch bring us a tear-jerkingly sincere goodbye as the Log Lady, Twin Peaks‘ own Margaret Lanterman (Catherine Coulson), bids a final goodbye. Those first two seasons all those years ago were prone to playing emotion for blunt force melodrama (remember Leland’s final moments?), yet the restraint here is what makes the Log Lady’s last call to Hawk (Michael Horse) so honestly touching. Coulson – one of Lynch’s longest-serving collaborators – was herself deathly ill, and as she tells Hawk she is dying we can feel the sense of loss and tragedy not just on the screen, but behind the scenes, as this creative family readies itself to lose another one of its own. It is almost certainly that grounded truth which affords the sequence its potency. Afterward Hawk gathers his friends in the conference room and relays the news. Tears toll down Lucy’s cheeks. It’s a dark night in the town of Twin Peaks.

And not just there. The most intriguing and exciting element of Part 15 comes between these two cathartic emotional moments as we catch up with Evil Cooper on the road. This section undercuts the celebratory union of Ed and Norma as we transition from day to night and the electric skies seen by Andy (Harry Goaz) when he visited the Fireman.

Cooper drives by night to the Convenience Store, which has moved from the desert to the woods (the end of the sequence reveals that it can, indeed, change location and so therefore there’s every reason to believe this is the same store from Part 8). Part 15 affords us more time than ever before at the Convenience Store, and proves to be a dark and fascinating journey, collecting up memories from the past.

One of the dirty bearded men leads Cooper up some stairs-to-nowhere (remember the inhabitants live above it). In an electrical crackle they disappear inside. Lynch shows us some dark woods which we push into as that Penderecki music cue from Part 8 rises again. Inside the Convenience Store another bearded man waits with a lever. Cooper states he is looking for Phillip Jeffries and the bearded man pulls the lever (redolent of Eraserhead and perhaps a counterpoint to Naido’s similar action in Part 3). As this is happening, take a look at the wallpaper. That wallpaper is important. Twin Peaks just made a big connection to its past.

Remember the painting given to Laura Palmer by Mrs Chalfont / Tremond in Fire Walk With Me? When Laura put it on her wall and fell asleep she went inside the painting. The painting was of a door and the wallpaper was the same as in the Convenience Store. We now know that the Painting Room is the inside of the Convenience Store; that this is the place Laura was being drawn towards when the entities working with BOB were trying to take her over too. As if to underline this connection we briefly see the Jumping Man too. The Jumping Man (and his downright scary mask) hasn’t been seen since Fire Walk With Me either. Lynch leaves us to tie these things together, but the connections are there to be made.

Those dark trees recur again as Cooper walks with one of the dirty bearded men to the staircase that Cole saw in the vortex in Part 11. The recurrence of the trees within the Convenience Store go some way to underlining that it is not a physical place at all; that Cooper is in effect between worlds, walking in a spectrum outside of normal sight. This is made clear when he emerges at the top of the stairs at a rundown motel somewhere. A mysterious inhabitant in a nightgown credited as ‘Bosomy Woman’ (Malachy Sreenan, pictured below) talks backwards and lets him in to see Phillip Jeffries. 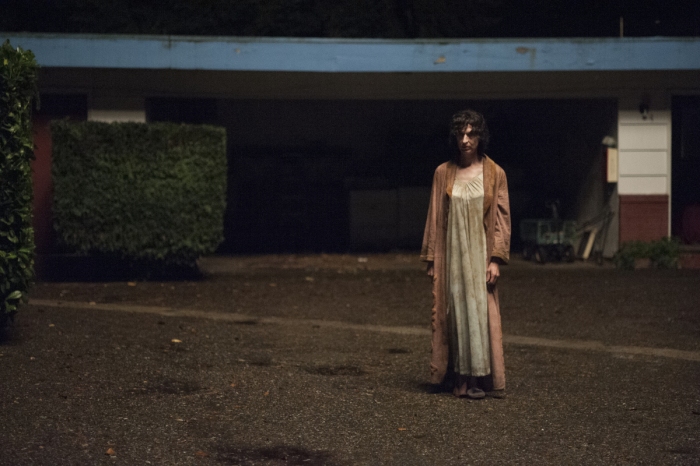 Now, there was a lot of commotion last week when archival footage of David Bowie was used, leading many to speculate that Bowie may have performed some new scenes and that Lynch was preparing us for these. Part 15 shows this is not going to be the case. Much like the way in which Lynch worked around Michael Anderson’s decision not to return as the Man From Another Place – replacing that character with a brain on a stick – here he reconfigures Phillip Jeffries into… well… a giant teapot. Perhaps only Lynch could get away with something like this. Credit to MacLachlan for selling this revelation absolutely. Jeffries denies calling Cooper 5 days ago (it’s only been 5 days!?!) and another mystery from Fire Walk With Me bubbles to the surface; Judy. Who is Judy? Jeffries insists that Cooper already knows her and funnels steam from his spout into numbers (yeah). These could be the coordinates. A phone rings which Cooper answers; it transports him back outside the Convenience Store.

Here he encounters Richard Horne (Eamon Farren) who confirms that Audrey (Sherilyn Fenn) is his mother. Richard bungles an attempt to kill Cooper and Cooper beats him. At Cooper’s order, Richard gets in the truck so that they can “talk on the way”; one assumes, with three hours remaining, that they are headed for Twin Peaks…

This long sequence with Evil Cooper isn’t the last overtly menacing one, as another story strand reaches a rather disturbing conclusion. Hiding in the woods with his girlfriend Gersten Hayward (Alicia Witt), Steven (Caleb Landry Jones) reaches his wit’s end. It is intimated strongly (though not shown explicitly) that he kills himself with his own gun here. That in itself is dark, but the manner in which it is presented is supremely uneasy. Steven appears pressured by the woods themselves. The sound design here is stifling and the overwhelming feeling is that the trees themselves push him over the edge. This kicks off a series of deaths like an infection in the episode, leading to the tragic loss of the Log Lady.

Curious side note. The show has dedicated episodes to lost actors by name up until now. Part 15 is dedicated to the character of Margaret Lanterman. Frost and Lynch acknowledging the incredible love that this iconic character has conjured in fans across the world.

No sign of Tammy, Diane and company this week, but one would assume that they’re headed for Las Vegas. If this means they reunite with Dougie/Cooper, then this could well turn out to be a fly-in visit before everyone comes together back in Twin Peaks. There is an alarmingly small amount of time left and I’ve not even covered everything this week. Twin Peaks is intensifying and on perhaps the best form of its entire run. Part 15 shows real emotion. It’s fascinating to pick the show apart, but it’s not above going right for the heart and striking with precision.