Spike Lee’s blazing return to form, BlacKkKlansman, opens with one of the most famous shots in American cinema, though not one of his own. The picture begins with the sweeping moment in Gone With The Wind when Scarlett O’Hara (Vivien Leigh) steps from the train to a sea of wounded soldiers. It’s one of the great epic moments of its era; Victor Fleming revealing to his audience the suffering of the fallen. They are soldiers fighting a Civil War that Lee ensures us is not over.

Based on a true story, BlacKkKlansman takes us to Colorado in the 1970s, as young African-American Ron Stallworth (John David Washington) fulfills a life-long dream of becoming a cop. Cocksure and aware that his ethnicity can open up opportunities for him in the department, he quickly works his way into the Intelligence Unit. One day, at his desk, he spies an advertisement in the paper for the Ku Klux Klan and he decides to give them a call. Assuming the identity of a would-be devotee of the, ahem, ‘organisation’, he manages to arrange a meet.

There’s a conspicuous problem with Stallworth’s ability to attend, so he hatches a zany scheme. Enter amiable (and Jewish) colleague Phillip ‘Flip’ Zimmerman (Adam Driver). Flip will be the human personification of Ron Stallworth. Between the two of them they work up the identity of their undercover persona. Through this method, Ron Stallworth, a black Colorado cop, becomes a paid up member of the KKK. He even gets to talking with their Grand Wizard, David Duke (Topher Grace).

Lee’s attention was brought to the project by Jordan Peele (Get Out), and BlacKkKlansman is a co-production between his MonkeyPaw Pictures and Blumhouse, stepping out of Blum’s lucrative cubby hole of high-return horror pictures. Thanks to this backing, BlacKkKlansman is Lee’s best looking film for a few years. He has a reasonable budget behind him. Chi-Raq didn’t lack for energy, but it felt like a much smaller production than this. In an effort to ape the feel of 70’s movies, Lee shoots on film. Cinematographer Chayse Irvin (the man behind swathes of Beyoncé’s Lemonade) adds a richness to BlacKkKlansman that evokes some of the best of the era its set in.

These formal nods to the past evoke the same playful spirit witnessed in many a Tarantino flick, and like QT, Lee keeps BlacKkKlansman shrewdly light and playful. Many scenes are played for comedy and work exceedingly well as a result. The film doesn’t feel remotely like a lecture. Instead, we’re treated to a picture that is tailor-made to entertain as well as illuminate. Lee has always been a political filmmaker. BlacKkKlansman doesn’t soapbox in the way Chi-Raq did; it uses tried and tested methods of audience engagement and empathy to corral you into taking Lee’s position.

It’s not a hard sell. The Klan members presented are ridiculous. Jasper Pääkkönen’s maniacal Felix is a skull-faced caricature, while the dumb-as-a-bag-of-hammers Ivanhoe (played by I, Tonya‘s token dunce Paul Walter Hauser) is as stupefying in the other direction. Topher Grace’s portrayal of David Duke similarly makes the man a Partridge-esque mockery. Watching the film, we relish how easily taken in these extremist white-boys are. 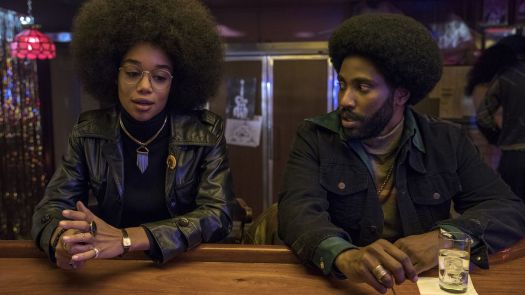 This element of pantomime might potentially diminish their impact as heinous villains, were it not for a sobering sequence mid-film in which Lee cross cuts their ceremonies with a special guest turn from Harry Belafonte. Belafonte plays a man named Jerome Turner giving a talk at a local college meet, during which he recounts the horrifying true story of a public lynching some years before.

Lee contrasts this with footage from another piece of American cinema history. Having inaugurated Flip, the Klan members sit down to a screening of D.W. Griffiths’ The Birth Of A Nation; a famously racist depiction of black men and women from the golden age of silent cinema. Along with the inclusion of Gone With The Wind at the top – and some borrowed footage of quite another kind at the end of the picture – Lee is commenting on the persuasive power of film; that it can be an engineer of social change, for better or worse.

While set in the 70’s, BlacKkKlansman is quite consciously a film of the now. A churlish exchange on the fantasy of a man like David Duke becoming president feels a little forced, but gets the point across. More consistently, the appearance of posters to re-elect Nixon draw subtler comparisons to the present Trump administration. Lee packages this all as a fun yarn, but applies pressure in particular areas, enough to make us acknowledge that extremism and racism are ongoing threats in America, and while mockery is as fine a weapon against the far-right as it’s always been (the film carries the spirit of Chaplin’s The Great Dictator), the potential casualties and consequences are very real indeed.

Washington and Driver make for great leads, lending the movie an amiable buddy-cop vibe (also in-keeping with the time period). As the ‘face’ of Ron Stallworth, Driver arguably gets the lion’s share of the screen time, but Washington also gets a well-rounded subplot involving Ron’s burgeoning relationship with campus activist Patrice Dumas, played by Laura Harrier. Harrier makes much of the role, imbuing Patrice with a firebrand spirit. A scene of the two of them drawing protective handguns toward the movie’s end had me wondering how she’d have fared back in the day as her very own Cleopatra Jones.

Their last shot together is one for the ages, and segues us into Lee’s timely coda, invoking an abrupt change of tone. The things you see before the credits crawl are without doubt the most shocking and sobering of the movie. Lee has entertained us, he’s played master of ceremonies, and given us such a good time it might’ve been easy to take BlacKkKlansman lightly if it weren’t for this final stroke. Heavy-handed? Perhaps. But the strong counter-argument is that, in these unsure times, there’s little reason to be anything but persuasive.