After the intensely weird odyssey of Part 3 (especially it’s opening), Part 4 can’t help but feel a little more grounded, though we’re still talking  comparatively here. We return to the casino where the man-child version of Special Agent Dale Cooper (Kyle MacLachlan) is causing a stir winning big on the slot machines, having been granted the nickname Mr Jackpots by a chirpy little old lady. With 30 jackpots under his oblivious belt, Cooper’s actions have garnered attention from the management, who offer to escort him home in a limousine. Coop only knows he has a red front door (thanks to a brief interaction with Ethan Suplee), but the limo driver is able to help him get where he needs to be going.

He is met by one of the new season’s notable guests, Naomi Watts, playing Dougie Jones’ evidently long-suffering wife Jane-y Jones. The episode reveals they also have a child (only in Twin Peaks would a couple literally name their son Sonny Jim), This tells us that either a) Evil Dale has been playing the long game setting up this decoy or b) he is able to fundamentally affect and rework reality to his needs. Watts throws her all into the role, as ever, and her performance is one of her best since Mulholland Drive, suggesting her and Lynch remain a perfect fit. Her line reading “This is the most horrible, wonderful day of my life” is pure Twin Peaks, and the first signifier in Part 4 that we’re really starting to get back to the show’s roots. Indeed, probably the most heartening thing about Part 4 is how at home the show is starting to feel.

FBI Deputy Director Gordon Cole (Lynch) meets with Denise Bryson (David Duchovny), who is now the FBI’s Chief of Staff. The scene feels a little like fan service; an excuse to give Bryson a little screen time, but that’s fine with me. There’s a wry charm to seeing Duchovny back in the role – and relishing saying “Federal Bureau Of Investigation” unabbreviated – with all of The X-Files under his belt. Cole’s wince at Bryson’s talk of hormones still keys into an old-world sensibility that Lynch himself has struggled to free himself of so far this season. In his Cole persona the man acknowledges he is who he is. The scene feels self-aware; Lynch talking to the audience about his own psychological make-up, perhaps. Whether this is warranted is another matter.

Back in Twin Peaks, Lucy Moran (Kimmy Robertson) is the usual butt of a number of jokes at the expense of her relentless idiocy (grating slightly) but, more welcoming, is the arrival of Robert Forster as Sheriff Frank Truman, brother of the now-sick Harry Truman who won’t be returning to the show (Michael Ontkean’s disinterest in Twin Peaks has long been public record). Forster was Lynch’s first choice for the character of Harry anyway, and his Frank Truman fits right into the scenery. I get the feeling he’ll be a great addition to the series. We also get to meet a number of other members of Twin Peaks’ present constabulary, including – surprise! – Deputy Bobby Briggs (Dana Ashbrook).

Some, myself included, have complained that season 3 hasn’t had the feeling of the old show, but Part 4 goes a long way to bridging those gaps. Most beautifully, this feeling of old and new sensibilities welding comes when Deputy Briggs walks into the conference room and sees all of the evidence from the Laura Palmer case laid out. Angelo Badalamenti’s “Laura Palmer Theme” strikes up and Briggs is overwhelmed with emotion. It feels like a moment right out of the first season and works wonders connecting the tonal dots between past and present. Twin Peaks is coming together and starting to feel like a whole again. A new deputy Chad Broxford (John Pirrucello) also gets to spit dialogue that rings true with the style of old, even as he disses the Log Lady. Actually, he seems like he’d be more suited to policing Deer Meadow than Twin Peaks.

Naomi Watts isn’t the only high-profile name to debut in Part 4. Michael Cera makes his first appearance here as – OF COURSE – Lucy and Andy’s son Wally Brando. Wally may well divide audiences. Personally, I found him hysterical and kudos to Cera for making the experience so delightfully absurd. Born the same day as Marlon Brando, Wally seems to have adopted his rebel persona. Cera acts it with a slight Brando twang, though more laconic and spaced-out. Here we find the show’s former silliness getting a light footing. As long as it isn’t overplayed like in the latter half of season two, some of this is absolutely welcome.

The One Armed Man appears before Cooper (who is evidently still tied to the Black Lodge as Laura Palmer was in Fire Walk With Me) and gives us some Lynchian exposition, advising that one of the Coopers must die. In his present state our Good Dale hasn’t a hope against Evil Dale. Good Dale’s baby routine is getting remarkably old remarkably quickly. MacLachlan has a handle on it, but here’s hoping Coop comes to his senses sooner rather than later. If he remains like this, the rest of the narrative strands are going to have to work double-time to compensate. Signs of the old Dale are there though. His thumbs up to Sonny Jim seems to trigger something, and his reaction to a mouthful of coffee is even stronger, perhaps even a breakthrough? 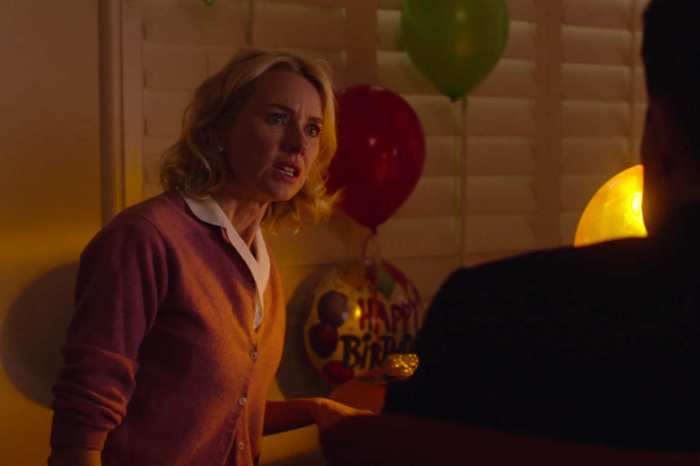 Back in Buckhorn, Constance Talbot (Jane Adams) and Detective Dave Mackley (Brent Briscoe) come up against a roadblock in their investigation of Ruth Davenport’s murder. The remainder of Part 4 is spent in South Dakota with Gordon Cole, Albert Rosenfield (Miguel Ferrer) and Tamara Preston (Chrysta Bell). I enjoyed the idea that Rosenfield would prepare to placate Cole by bringing with them a photo of Mount Rushmore. Indeed, the humour of Twin Peaks is now firmly re-establishing itself.

Evidently the Evil Dale has been apprehended following his car accident. It appears the “garmonbozia” he vomited up has a toxic effect on others, reminding me of the alien blood from The X-Files. Cole, Rosenfield and Preston interview the incarcerated Evil Dale, whose speech is somewhat labored. Evil Dale pretends to be the regular Coop and Cole seems to buy it. Evil Dale spins a tale that he’s been working undercover with Philip Jeffries (who was played by David Bowie in Fire Walk With Me), but seems preoccupied by Albert Rosenfield’s presence. Afterwards, Preston is exasperated that Cole is buying Cooper’s story as his tale doesn’t hold water. This is her first scene of any real substance and it’s a promising one for the character, yet the way she is treated by her co-workers is still triviliased.

Albert reveals some information about Philip Jeffries which opens up a new avenue of intrigue that stretches as far afield as Colombia (who knows if that’ll pay off in any substantial way). Cole reveals that he actually is suspicious of Evil Dale. The substantive part of Part 4 ends with Albert suggesting that this is a “blue rose” case, and Cole agrees, “it doesn’t get any bluer”. Cole wants a “certain person” to take a look at Cooper for a better read on the man. Cutting from here to the Roadhouse suggests the pair are headed back to Twin Peaks, but this might be a red herring, as each part returns to the Roadhouse to close. I’m wondering if they’re talking of Audrey Horne, seeing as it’s all-but confirmed that Heather Graham won’t be reprising her role as Annie. Is Audrey also the secret billionaire behind the Glass Box? Perhaps they’re referring to Margaret Lanterman, although its unclear how much material Catherine Coulson was involved in before her sad passing. Might we finally meet Diane? I guess we shall see. Part 4 plays out with a song from Au Revoir Simone. The song is “Lark”.

Part 4 sees the returned show finding some stability, building on its humorous side, and furthering plot points in increments. These are all welcome developments. If this means trading away some sensational material for other instalments, that’s almost certainly to the overall show’s benefit. It now seems certain that these four parts were released together for everyone’s benefit, as taking weeks to reach this point would’ve run the risk of alienating many. Taken as a four-hour whole, we’ve come on quite a journey already and there’s plenty of road ahead. I’m invested and looking forward to more.