First, lets get one thing clear; this piece isn’t about to throw unnecessary shade on Brian De Palma’s seminal adaptation of Stephen King’s novel Carrie. That film is and remains a classic, a genre staple, a paean to female victimhood. But I think it’s fair to say that the same sentiments aren’t often directed at Katt Shea’s sorta-sequel The Rage: Carrie 2. In the realms of horror sequels and tenuous franchising, it is among the least loved, among the most derided of efforts. Almost enough to make it notorious in its own right. What I’m here to suggest is that maybe there’s more worth here than you remember. Carrie is a masterpiece, but I enjoy The Rage: Carrie 2 about as much, if not for the same reasons.

Released at the tail end of the ’90s to absolutely no fanfare, The Rage: Carrie 2 focuses on Rachel Lang (Emily Bergl), a similarly-outcast teenage malcontent harboring latent telekinetic powers. It has a contemporary, millennial setting, and the only holdover from De Palma’s film is former-cheerleading bully, now guidance counsellor Sue Snell (Amy Irving). Sue vocalises a theory that Rachel and Carrie share the same father by way of giving greater connectivity to the two movies, but really she is the extent of the tangible relationship between them.

Rachel’s suppressed abilities are ‘triggered’ after the sudden and violent suicide of her best friend Lisa (Mena Suvari), who leaps from the roof of the high school and crashes into the windshield of a parked car (a stark, effective and convincing point of impact early on in the film). Jeffrey Eugenides’ The Virgin Suicides (also adapted into a more widely loved film in 1999) has a line about it’s first fatality having “spread the poison in the air”, and so it comes to feel in The Rage.

Yet as things develop it becomes clear that Lisa’s suicide was a symptom of a greater evil, rather than a cause. The jocks of the high school are sleeping with and then dumping the girls in their class as a kind of inane challenge to one another, blithely disregarding any emotional fallout that piles up in their wake. The Rage explicitly targets rampant teenage misogyny, something that was positively encouraged throughout the ’90s as ‘lad culture’ or its variants ran rampant in direct opposition to political correctness and second-wave feminism. This was the prime era of FHM, Maxim and their respective “top sexiest” lists, as well as the first boom of the internet and it’s burgeoning ability to make porn exceedingly accessible, and the era of the unironic hip-hop video (MTV culture was still very much a thing). The media message about women was ubiquitous. Ubiquitous enough for the Spice Girls’ “girl power” chant to actually carry weight as an empowered objection.

The Rage takes “girl power” to a more literal horror conclusion. Rachel is charmed by her polar opposite on campus, football playing Jesse Ryan (Jason London); the least-awful of the group racing one another to gather notches on the bedpost (Jesse goes against the grain of his teammates, refusing to shave his head, effectively signaling himself as an ally outside of the team’s Full Metal Jacket-aping display of testosterone). When his teammates reframe their relationship as part of their contest – disregarding her as a person – Rachel unleashes all hell at a party where intimate video footage of her and Jesse is being broadcast to their entire class.

It works because the trajectory of the budding relationship between Rachel and Jesse is actually rather sweet. In spite of her declaration that she doesn’t believe in love, her behaviour is more romantically inclined than she would perhaps like to admit. Jesse puts the moves on her in his car and she stops him, advising she would prefer her first time be special, imagining a man (Jesse) bringing flowers to her door. It’s a surprising admission given her earlier statement; revealed here to be defensive bravura as opposed to the genuine position of her heart. Instead of opposites, Rachel and Jesse are, in their way, kindred. It makes the eventual sabotage and collapse of their relationship carry greater dramatic weight. The Rage is capable of real audience engagement if you allow it. 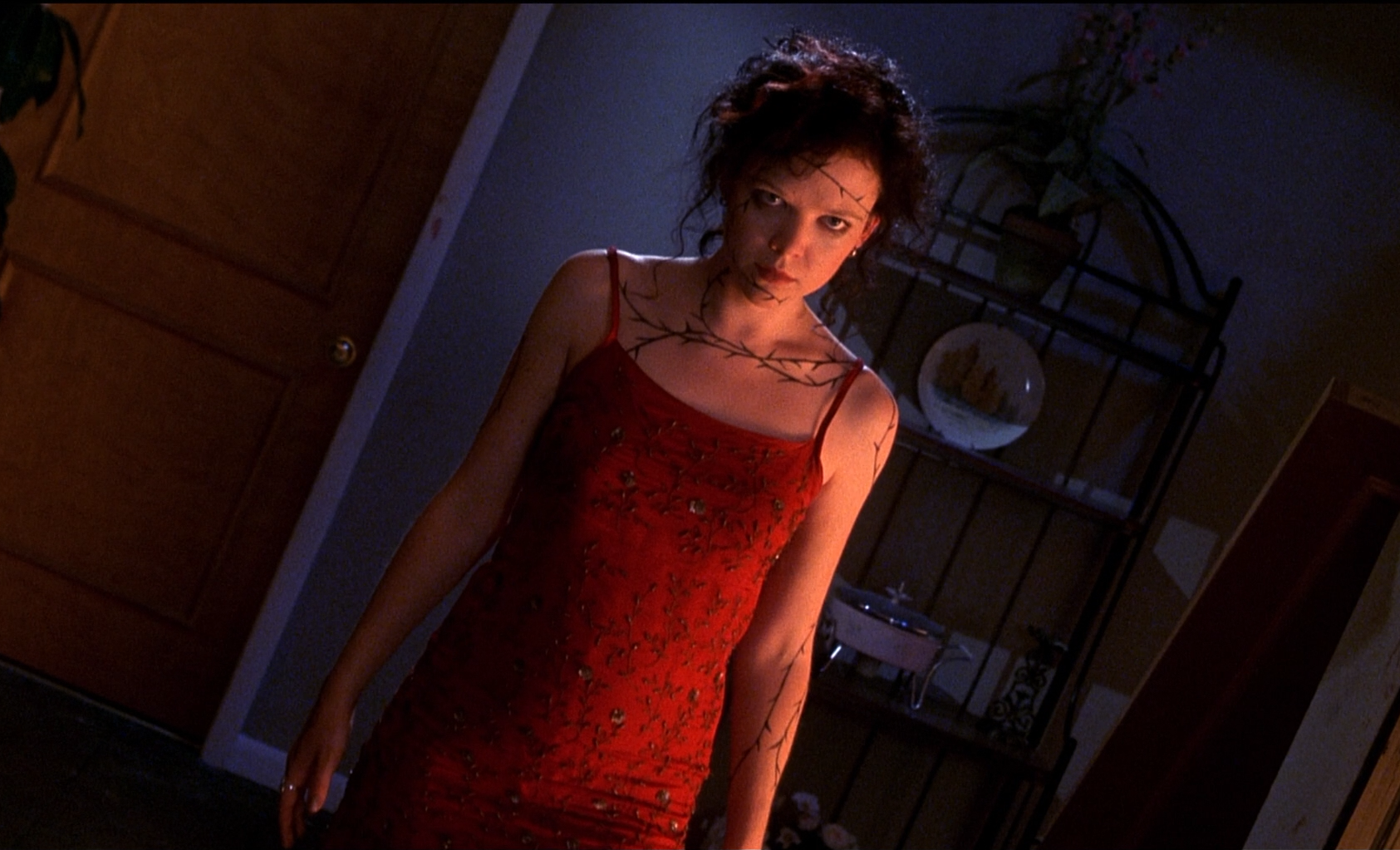 The garish tendencies of cheap ’90s horror sequeldom are writ large all over The Rage. The abundant use of Dutch angles, that sickly sunset bleed to the lighting, dated CG, obnoxious teenage boys aplenty (though here that’s rather the point), and source music layered heavy in the mix to approximate the music videos that were proving so popular with youth culture (Rachel’s retro taste for the jazz of Nina Simone etc. seems directly in opposition to these pop trends; another sign of the film pushing against the norm – a rejection of a trope itself evidenced elsewhere as a method of othering the protagonist). Every era of horror has its aesthetic staples. At the time and soon after they’ve become over-saturated, these choices can seem particularly naff or staid. It takes some time for the pangs of nostalgia or critical revisionism to reassess their qualities. I find myself pining for the supposed ‘ugliness’ of some ’90s horror titles. The Rage sits beside Candyman: Farewell to the Flesh as emblematic, to me, of this kind of hot-hued filmmaking; material which might have more appropriately gone straight-to-video but which busted into cinemas on the coattails of prior successes. In short, the ’90s horror sequel – maligned as it is – has its own set of gauche qualities that sate a different set of desires and reminiscences than their revered forbearers, the ‘classics’.

Katt Shea’s direction may evidence plenty of crude ’90s horror tics, but it is also assured and she elicits a consistent set of performances from the cast. Rafael Moreau’s dialogue aims to ape Kevin Williamson a little too conspicuously, but largely The Rage goes for sincerity over the then-pervasive post-modernisms that Scream made seem unavoidable. The talk traded between the teens has plenty of Buffyisms, but it feels more true to the time period than some of its more self-consciously arch peers. If its still a little naff, that’s part and parcel with the broader sense of nostalgia that I wholly admit raises this movie up for me.

And it does stand up. Granted Shea and Moreau can’t come up with anything as iconic as De Palma’s final button-pushing jump scare, but I’d argue that Carrie would have been better off without that addition anyway. On the whole this is a focused enquiry into a very real trend of gendered bullying and the damages that it causes. As with Carrie White before her, Rachel Lang and her slut-shamed kin aren’t able to achieve credibility and some of them – Rachel included – even lose their lives thanks to the thoughtless actions and stigmas applied to them.

That’s a rather pessimistic note to end on, but its as important to acknowledge as any other facet of The Rage: Carrie 2, positive or otherwise. Discredit it as a trashy cash-in if you want to, but this movie makes its point all the same.