The box. The hole. Movies and TV have given us many iterations of the darkest depths of solitary confinement in prisons, from Andy Dufresne blinking up into the warden’s callous eyes in The Shawshank Redemption to the salacious torture chamber shared by Pam Grier and Margaret Markov in (insanely entertaining) Filipino exploitation picture Black Mama, White Mama. But have any of the medium’s multitudinous versions so vividly doubled as both a time machine and a mirror for cinema itself?

In Sebastian Meise’s transcendent Great Freedom, ‘the box’ obliterates time in ways previous unimagined. While it’s safe to say all notions of actual time become hard to calibrate in solitary’s intense sensory depravation, Meise closes the door on one era and opens it on another. He uses it to move backwards and forwards in time. Thus he’s able to nimbly craft one of modern cinema’s most magical and moving love stories; all within the walls of a German prison between the years 1945, 1957 and 1969.

Hans Hoffman (career-best Franz Rogowski) is incarcerated time and again under Paragraph 175 of German law, which criminalised homosexual behaviour. He’s a gay man and the world doesn’t want him. When we first meet him it’s 1968, and he’s been captured on camera cottaging (the first of the film’s interior reflections on cinema and voyeurism). At this point we’ve no context for who Hans is and what prison means to him. He recognises an older fellow inmate named Viktor (Georg Friedrich) who seems to share the same staunch anti-gay mindset as many of his brethren. But there’s something else in the mix. A complication.

It’s only once Hans causes enough trouble to end up in solitary confinement that Great Freedom takes flight. Meise reveals his master trick. It’s not so much that the film comes alive because of a gimmick. Far from it. But by unshackling the film from conventional structure, Meise makes it feel like we’ve been lifted off of the ground.

We won’t touch down for another hour and a half.

As Great Freedom unfurls and – even more importantly – as it has room to grow and breathe in the aftermath of watching, it becomes more and more impressive, both in terms of it’s flourishes and it’s restraint. One comes to appreciate the way the narrative triptych is also keenly balanced and redolent with mirror images. Hans and Viktor seem like men at odds, opposites even, yet the film will ultimately use a-chronology to chart a tender bond that places Great Freedom among the great contemporary films above love. Carol. If Beale Street Could Talk. Portrait of a Lady on Fire. We should be talking about this film in the same breath. 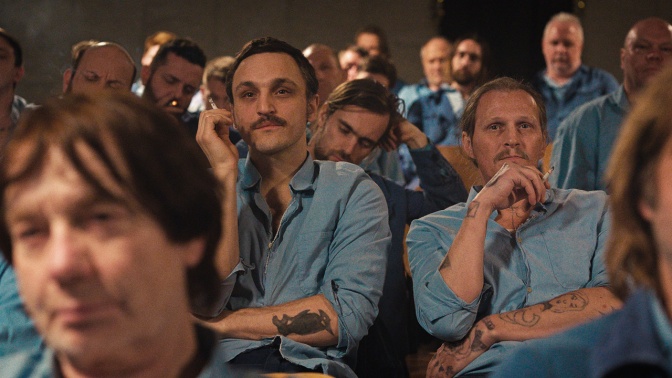 So, inevitably, there are things that echo back and forth between the two men, and across time. Needles and puncturing becomes a recurring motif, from the tattoo Hans carries on his arm and the story behind it, to the train tracks that scar Viktor’s once he becomes dependent on heroin. Tied up in both of these acts is a preoccupation with shared and mingling fluids; something that becomes a spiced additive to the cocktail of sexual frisson felt throughout the film.

Great Freedom isn’t coy about sex and the importance of it, especially to Hans. And it is used throughout the film to express love and devotion and also to apply unspoken pressures, and to shatter worlds. A scene of Hans arranging a conjugal clinch with one of his inmate boyfriends might actually be about the absent Viktor, while also being about the need and desire on screen. Meise’s approach is both high-level and aware of sensual immediacy. It’s a thoroughly grown-up and refreshing approach to sex on screen and a rebuke to those who decry such scenes as meaningless in movies.

Then there’s the importance of crossing borders; choosing, even switching sides. The prison exercise yard is one key zone in which sides are silently defined. Inmates keep to their respective sides. Crossing the midway means putting your neck out. Putting your neck out means something. It’s about the gradation of absolutes. A shared cell is another demarked space. A bunk on either side. For Viktor, sharing with Hans involves strict adherence to sides and so again, the erosion of boundaries and the crossing of the invisible equidistant line can’t help but become significant. And all of these micro boundaries speak of the larger rift in post-war Germany. East and west. Great Freedom presents a slow civil war between sides. Maybe even a cold war, slowly thawed through body heat and human compassion.

Not only are the central performances from Rogowski and Friedrich flawless, but the technical aspects that support and bolster them are magnificent, too. I’m genuinely surprised that this film wasn’t constantly in the conversation when it came to hair and make-up in movies over the past year, as the delicate, deft and stylish touches in this regard are surprisingly deep, both in how they convey the passing of time and the extent to which they express details of character. Meanwhile, Crystel Fournier’s cinematography is exquisite, especially considering the drab surroundings that make up much of the film’s environs. Indeed, she draws warmth and beauty out of the most interesting places, and the play of light and darkness can be quite extraordinary.

The writing is the unseen masterstroke. Not only in the complexity of shuffling time zones, but in the economy of dialogue and the parcelling of inspired and elegant moments into the whole (a further sequence of puncturing results in one of the film’s greatest romantic gestures). Great Freedom can be achingly sensitive but also coyly funny (a late, wordless scene of two men making beds is silently hilarious), while it all feels part of a cohesive whole, especially in how it evokes a sense of oppression and intolerance lasting as long as a life sentence.

We go to the cinema. They close the doors and the lights go out. We sit in the box. The hole. Collectively sharing this solitary confinement. And then the filmmakers light their match and transport us. Great Freedom is that kind of transporting experience at it’s very best.