A while back I covered my myriad reasons for loving the second entry in the Female Prisoner Scorpion series (a film that, if anything, I’ve grown to love even more – it’s presently in my personal all-time top 10). But a recent re-watch of the four core movies starring Meiko Kaji from 1972 to 1973 reignited my passion for Beast Stable; the third film of this run and the one that feels most like a vision of hell.

If the first film is an all-out women-in-prison exploitation film, and the second is an unlikely feminist manifesto wrapped in the trappings of a psychedelic prison escape picture, Shunya Ito’s third is the series’ tragic horror movie. There’s no better way of summing up the cracked synopsis of this grimy picture than the following faithful description taken direct from the back of the Arrow Video release:

“Female Prisoner Scorpion: Beast Stable finds its heroine, Nami Matsushima (Meiko Kaji) hiding out in the city, and branded public enemy #1. A dogged police detective (Mikio Narita) corners her on a subway but loses an arm as a result, and Nami finds refuge from the dragnet with Yuki (Yayoi Watanabe), a down-and-out prostitute living in an incestuous relationship with her brain-damaged brother. The pair of women soon run afoul of a local gang of villains led by a sadistic, gender-bent female crime lord named Katsu (Reisen Lee), who inflicts forced abortions on the girls working for her, and tortures Nami before confining her in her own private dungeon.”

Strong stuff indeed. I’ve tested out the credulity of some friends by showing them that paragraph, and it hasn’t helped my integrity any as a would-be connoisseur of cinematic taste. But Beast Stable isn’t about good taste. It’s a picture that roils in the muck of Japanese society, that critiques its response (or lack thereof) to ‘fallen’ and forgotten women.

When she makes her escape from Katsu, Nami is forced into hiding in the sewers which the police set ablaze in an effort to flush her out. This pyrotechnic extravaganza is the literal hell that the rest of the picture alludes to in other forms. Ito is none too subtle about it, but the audacity of his staging is stark to say the least.

The transfer of the film made available by Arrow isn’t the sharpest restoration, but in the case of Beast Stable this works wholly in the film’s favour. The grime and grain of the print gives it a raw quality that might not have survived a more immaculate clean-up. Watching the film now at a near fifty year remove, it has the feel of something uncovered or dug-up, perhaps found in the graveyard where Yuki first encounters Nami as she’s trying to saw off the handcuffs from which the detective’s severed arm still dangles.

Where the previous film Jailhouse 41 becomes great as it goes along, Beast Stable gets your jaw dropping from the beginning. Against the backdrop of the series’ signature title song (sung by Kaji), Nami is filmed running through the streets of Tokyo with the severed arm dangling from her wrist. Shot from a distance through crowds of civilians, the reactions of these unsuspecting extras are worth the ticket/boxset price alone, and unexpectedly links it to the more recent prank TV hi-jinks of Jackass et al. This is, however, where such associations end. 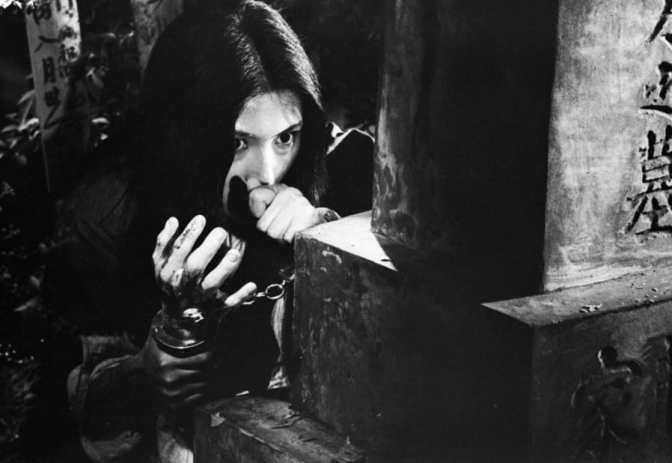 When the film settles down – and as the bond between Nami and Yuki deepens – it conjures an atmosphere that’s unique in the Meiko Kaji Scorpion films. Permanently angry and (for all intents and purposes) mute, Nami isn’t a poster child for emotional availability. But. on seeing and quickly understanding the deeply sad dynamic between Yuki and her brother, Nami recognises a degree of suffering and degradation comparable to her own as Japan’s number one outcast. Yuki’s kindness to her is one thing, but the reciprocated feelings shown by Nami – who becomes incredibly protective of her new friend – is as close as Ito’s films come to a love story. The fourth film in the series, Grudge Song – directed by Yasuharu Hasebe – makes effort to conjure a traditional – and heterosexual – romance for Nami, but it’s presentation is pedestrian and the film at large is perfunctory. Beast Stable, I’d argue, represents the most endearingly tender of the four, precisely because it stands in such stark contrast to the degradation on display.

If this gives the film a sense of queerness, Reisen Lee thrillingly warps that flavour toward the weird and kabuki. Her Katsu is a gloriously nasty and politically incorrect monster. Looking more like a man in drag than a domineering woman, Katsu blurs gender lines in a manner so exaggerated as to seem like a comment on the supposed duality required of the ‘girl boss’. Juggling perceived notions of masculine toughness and traditional femininity, the result is a garish and confused amalgamation, whose fixation on those forced abortions reads as an acute desire to destroy her own womanhood along with anyone else’s. It’s a volatile and dangerous rage that provides a palpable threat.

Like all women in Ito’s trilogy, there is a strong feeling that society has pressured and failed them. The critique is rendered harshly, perhaps in anger at Japan’s lacklustre response to the stronger feminist movements seen occurring in the western world in the years prior to these movies. Ito’s films are bitter about Japan dragging its heels in this regard, and Meiko Kaji is his intensely focused embodiment of that indignation. Her silence is her power, but also a reflection of the nation’s muted reaction.

As is the case for all of these movies, Kaji is the absolute power and driving force that raises them up above the action and exploitation pictures that appeared around them. Her piecing stare, unwavering commitment to the role and evident screen charisma combine into something truly special.

Ito and Kaji, it seems, found a mutually satisfying integrity that stands as a beacon in the history of action cinema. In tandem they are the standard for how it can and should be done, and nowhere is this more evident than in Beast Stable. The first film in the series doesn’t exactly pass muster in this regard, displaying an abundance of nude flesh and a leering eye. As the films progress, however, the nature of this stare changes. Pity and compassion come to the fore, and notions of raunchiness or sexiness are crushed out. A true evolution can be perceived. Jailhouse 41 might be the most magical and enthralling, but Beast Stable takes this maturity to such a logical conclusion that Ito considered his work fulfilled and didn’t return for the subsequent fourth film. In that sense, one might consider Beast Stable as a kind of artistic pinnacle.

You can feel it’s influence, particularly in the cinema of Takashi Miike, who mixes a similar sense of the grave and the tawdry in a number of his more famous yakuza, horror and exploitation pictures. But, even so, Shunya Ito’s work across these films feels – to this viewer – simply unsurpassed. And while he wryly nods to the past (the dog trotting with the detective’s skeletal arm is a sure comic echo of Kurosawa’s Yojimbo), the daring evidenced in his trilogy’s visual dexterity, experimental editing and abundant theatricality mark them out as unique in the landscape of Japanese cinema, irrespective of taste or genre.