Everything is explosive in Johnny Guitar. Miners shout. Waterfalls roar. Emotions over-boil. Guns fire. The movie starts with a detonation as developers encroach on the land in the vicinity of Vienna’s saloon, setting the tone for the remainder of the picture. In his archival introduction to the film, Martin Scorsese calls Johnny Guitar ‘operatic’. He’s not wrong.

This sustained tone of high-strung hysteria made Nicholas Ray’s Western melodrama something of a mystery to the American viewers who rolled up for it in 1954. Presenting a gender-skewed vision of the country’s frontier past, the film was derided and dismissed and might’ve become a footnote in movie history, were it not for the influential Europeans who embraced it. The likes of Godard and Truffaut celebrated the film. They recognised in Johnny Guitar – and specifically in Ray – an aesthetic separate to the identikit mechanics of the genre that surrounded it and, looking at in conjuncture with his following films – the teenage riot of Rebel Without a Cause and the suburban uproar of Bigger Than Life – they found a man befitting of the burgeoning moniker ‘auteur’. Ray, they thought, was onto something.

He certainly was. Emotions got bigger on the screen in the 1950s as the colours grew more lurid. Just as Douglas Sirk’s so-called ‘women’s pictures’ would belatedly be reappraised as signature films of the decade, so Ray’s bombastic dramas found their favour. The name of his 1956 film Bigger Than Life could be rewritten as the prevailing sentiment of these pictures.

In the township of Red Butte, Vienna (Joan Crawford) vies for power with another woman; her rival Emma Small (an incredible Mercedes McCambridge). Loosely controlled by Emma, a pack of amiable local wannabe-outlaws rob the town bank, putting Vienna in a compromising position as an implied accomplice. Anticipating trouble and looking to toughen up her own position, Vienna reunites with her old flame Johnny Guitar (Sterling Hayden); a musician and gunslinger who goes toe-to-toe with her throughout the film but remains, keenly, behind her all the while.

The blues of the desert skies are generally relegated in favour of a palette that cruises between red and yellow. Yellow – the colour of cowardice – manifests frequently in the wardrobe of the road agents that run roughshod through the picture, led by Ernest Bourgnine’s trigger-happy Bart. Flagging them in this way, Ray adds a visual indicator of their inherent weakness; their moves panicked and reactionary. Vienna herself wears yellow as the film’s climax, but this also coincides with her character being in hiding, having been forced into a temporary retreat. Even-so, a dash of red blurs the implication.

The reds tend to symbolise the passionate and the bold. See Vienna’s popping lipstick and matching neckerchief. She wears these items as emblems of her ferocity. In the third act, when things get so heated that Vienna herself literally bursts into flames (!), she strips down and re-clothes herself in a blood red shirt and – daringly for the time – a pair of blue jeans. Her ability to be perceived as powerful like a man exhibited through this stark wardrobe choice.

In between are the burnt umber tones of the rocky landscape that dominate not only the craggy peaks and valleys of the film’s exteriors, but also the interior of Vienna’s, the far wall of which is cut right out of the cliff. Her base of operations is as seemingly immovable as she is; stern; hardened; cracked only by its own crisscrossing shadows. Ultimately Vienna’s isn’t indestructible, but it’s as tough as its owner, and emblematic of the collision between old and new. 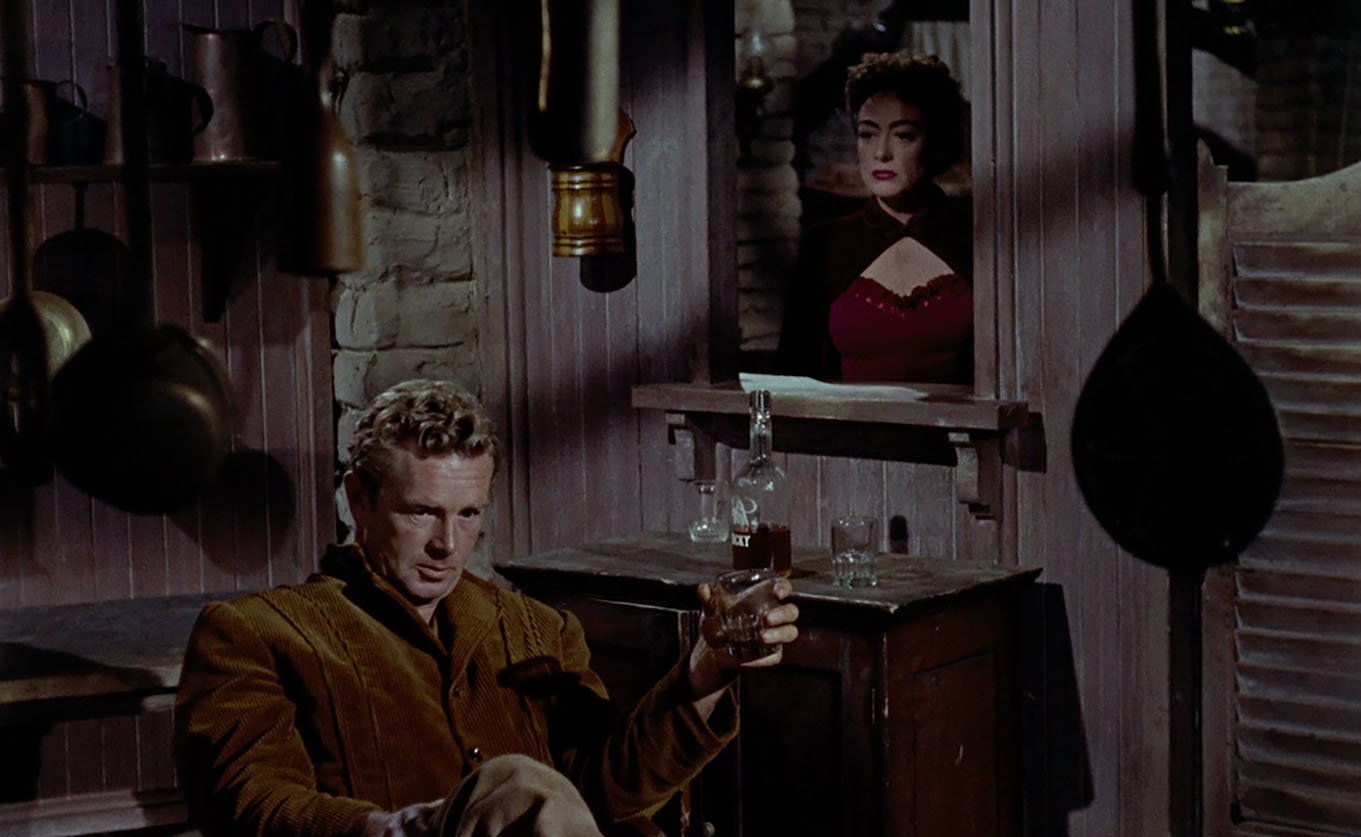 Volatility courses through Johnny Guitar, from the memorable and spicy dialogue exchanges to further dramas exploding out of the hillside. As Bart’s road agents attempt to flee town, the ongoing detonations spew debris that blot out the minimal flashes of sky. Elsewhere, a gushing waterfall spews its white foam at us. On all sides Ray’s film feels as though it is fit-to-burst, gesturing toward us emphatically. Ray’s vision of the West is tempestuous in the extreme; an arena of action, violence and passion that cannot be contained. Does it make the film feel realistic? It does not. But it makes it riveting and its influence is palpable.

In story terms, one sees the seeds of Sergio Leone’s Once Upon a Time in the West here. Vienna has staked her claim in Red Butte based on her firm belief that the railroad will catch up with her – the exact same reason that Claudia Cardinale’s Jill McBain holds firm in Leone’s picture. Meanwhile, a roiling and intimate scene between Vienna and Johnny has managed to be paraphrased in such disparate TV dramas as Deadwood and Buffy the Vampire Slayer. Johnny’s own “I’m a stranger here myself,” would end up reconstituted as the final line of Sam Peckinpah’s Straw Dogs. Given Peckinpah’s fondness for the Western, one struggles to think it a coincidence. There will be countless more echoes to collect and encounter. Johnny Guitar is one of those fierce originals whose sheer force echoes around the canyons of our culture.

With it’s largess, the film – and particularly Joan Crawford’s Vienna – can be viewed as camp. Her sense of drama is joyfully overblown (the scene in which she sits playing piano as she waits for Emma to storm her joint is vampish and delightful). She is the West’s pre-eminent diva. She wasn’t the first in this regard. See Marlene Dietrich in Destry Rides Again and Rancho Notorious. Barbara Stanwyck in The Furies and (in the wake of Johnny Guitar) Forty Guns and The Maverick Queen. But Crawford’s Vienna is the most iconic. ‘Johnny Guitar’ makes for an excellent title, but the film is hers.

But the queer credentials persist elsewhere, especially in that eye-popping wardrobe change that Vienna goes through toward the end. Throughout the film she exudes the kind of square-jawed masculinity usually reserved for male heroes in such films (Crawford’s casting in this regard is perfect), and by the end she is physically indistinguishable from her male counterparts. Though her history with Johnny and their renewed intimacy plays as heterosexual, their reunion isn’t even suggested to have been physically consummated, and Johnny makes few decisive moves to woo her. Indeed, Johnny often appears stiff, reserved and inferior to Vienna, shunned into the corners of frames or following her lead. The film ends on the two of them finally embracing in a kiss, but by this stage Vienna has been coded as male and Johnny’s general lack of gumption has eroded the preconceived definitions of his masculinity. They meet somewhere in the middle now, and the viewer is left with a wonderfully warped iteration of the genre’s gender norms. No wonder it caused such indignation. Bravo.