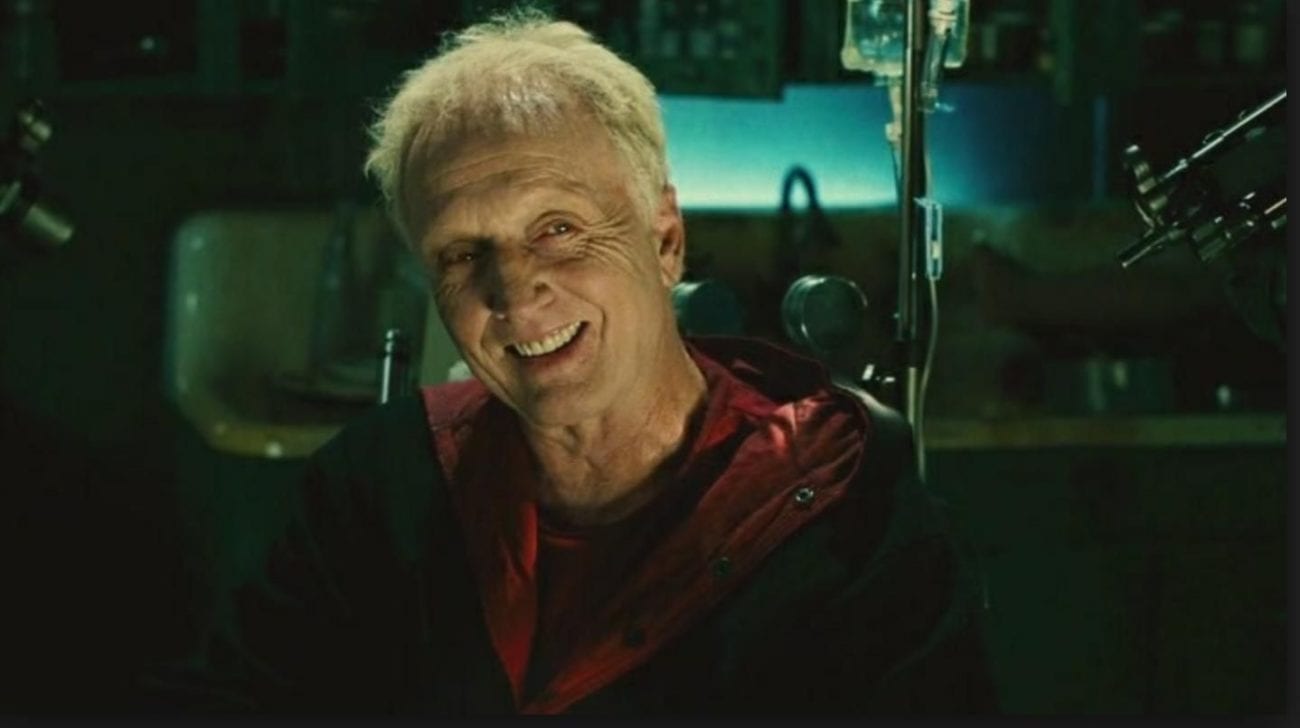 After months of lying dormant, biding their time, the nation’s cinemas are poised to reopen. And while the awards season giants are queuing up to draw extra revenue following their spurious streaming debuts, there’s also a scant smattering of new releases hotting up the listings. Among the most wryly amusing (hopefully) to arrive on opening day – May 17th – is the ninth entry in the Saw franchise.

Saw began as a calling card for James Wan and Leigh Whannell, who have gone on to steer other franchises and land major roles in the Hollywood blockbuster system. The nihilistic thrills of Saw‘s jagged edges went some way toward adding ‘torture porn’ to our lexicon; a subgenre whose true origins belong to the extreme films that were coming out of France and Japan around the turn of the millennium. But, along with Eli Roth’s Hostel series, Saw came to represent the nastier, more craven end of mainstream US horror, something the series wholeheartedly embraced as time went on. Often at the expense of all else. Still, it gave the genre a new elder statesman in Tobin Bell as John ‘Jigsaw’ Kramer (revered as much as Robert Englund or Tony Todd these days), and, regardless of the skill or quality of the movies themselves, brought Lionsgate some dependable box office.

So, with Spiral: From the Book of Saw primed to have us jolting our popcorn all over the place once more, let’s take a look at the eight films so far (SPOILERS, obviously), in personal order of preference starting – aptly for this franchise – right at the bottom, down in the gutter… 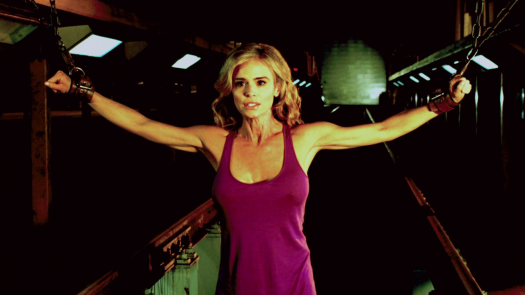 Also known as Saw 3D or The One Where They Dress Jigsaw Up as Eminem… it really doesn’t get much worse than this. Kevin Greutert – the series’ editor turned filmmaker – brings to mind Tommy Wiseau in most of his directorial choices. Performances across the board are atrocious. Hair and wardrobe seem intent on suggesting the entire run has looped back in time to the ’90s. Blood is pink for some reason (perhaps that’s a by-product of the garish colour-correction?). And then there’s the staging… the dialogue… Nothing works. Even the coup of getting Cary Elwes to reappear as Dr Lawrence Gordon (last seen limping out of film one) can’t make up for the flippant sense of cashing-in felt throughout. The idea of a Jigsaw survivors’ support group is actually a pretty good one. Too bad it is absolutely wasted in this mire of hot trash. 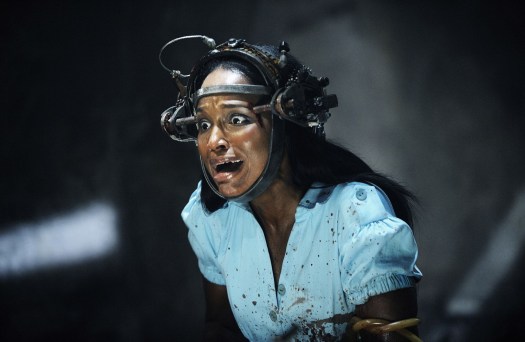 Greutert’s other offering represents the other significant low. By this stage Saw had completed its transformation from taught thrill delivery system to joyless soap opera, with ever-flimsier excuses for long-dead John Kramer’s elaborate torture chambers. Saw VI reveals schlubby cop Hoffman (Costas Mandylor) working in tandem with John’s widow Jill (Betsy Russell) to act out the mastermind’s final wishes… a laughably melodramatic vendetta against an rigid insurance claims assessor (Peter Outerbridge). The ‘philosophy’ that ran through the early films now seems laughably frail (one of the victims here is guilty of *gasp* smoking) if not wholly abandoned (many are killed without hope of saving themselves), making VI feel particularly cheap.

Excising every significant player from your franchise while you’ve committed to continuing is a baller move – so fair play to Whannell and Wan for that one – but in practice it left Saw IV in a deeply unenviable position, trading on the bland interactions of the series’ most minor characters. This is also the point at which the original creatives left the writer’s room… and boy does it show. Completing his own trifecta, David Lynn Bousman seems to get most of his enjoyment out of his funky scene transitions, while Jigsaw’s posthumous game is both absurdly elaborate and deeply uninteresting. IV sets up John Kramer’s successor… an almost unforgivably banal choice. Still, we do get to see Donnie Wharlberg’s Eric Matthews suffer a little longer, and IV is certainly one of the trashier offerings in the run.

It’s easy to get a bit confused during IV and V, because Costas Mandylor and Scott Patterson basically look like the same person. That problem is solved by the end of this one though! Saw V flits between cleaning up the mess of Saw IV and revisiting the group-panic exhibited in Saw II. With the latter, it helps to have some familiar faces from the era’s hit TV on board, including former Buffy/Angel regular Julie Benz and 24‘s Carlo Rota, not to mention a well-constructed set of interlinking puzzles. Incoming helmsman David Hackl tones down some of exiting director Bousman’s increasingly volatile techniques, and the series is better for it. It’s a shame he didn’t stick around. Saw V feels like an uptick. Even if it doesn’t prove revolutionary, it at least feels like a more stable offering. John Kramer becoming the cover star of all sorts of popular American magazines will never not seem funny to me.

The first attempt to reboot the series resulted in one of the best looking of all Saw films. Seven years after the so-called Final Chapter, the puzzle-loving Jigsaw was resurrected for a fun set of group traps all in the name of brutal yet ironic self-improvement. Five unrepentant crims are chained, bucketed and led through hell while a new gang of clueless cops try to piece things together as the bodies start appearing. After all the dross that centred around the insufficient Hoffman, Jigsaw is a breath of foul air. If it wasn’t quite enough to jump-start its own sequels, its by no means a weak addition to the franchise, and is probably the movie Spiral ought to be judged against.

Saw wasted no time capitalising on the success of Wan’s breakout debut, as the first sequel appeared just a year later, written by Wan and Whannell, but with directorial reigns handed over to Darren Lynn Bousman, who would shepherd us the next three on the trot(ter). Saw II is more action-orientated than its pressure-cooker predecessor, with the first of John’s ‘group’ puzzles to navigate. It presents us a thoroughly loathsome bunch, but does include two of the series’ most notorious traps; the pit full of used syringes and the vaccine finger-trap that surely isolates Emmanuelle Vaugier’s Addison as the series’ dumbest victim. Far more tantalising is the battle of wills happening elsewhere between John and crooked cop Eric Matthews (Donnie Wharlberg). It is here that Saw II excels, hiding a succession of small plot twists that, in combination, gamely attempt to one-up the original’s big shock ending.

Saw III has a fair bit going for it. Here we find John on his deathbed, nursed by protege Amanda (Shawnee Smith), playing a convoluted game with a surgeon whose survival becomes entwined elaborately with his own. Developing John, Amanda and their relationship to one another is a good hook, and their makeshift surgical bay evokes the claustrophobia of the first two installments. On the other hand… secondary protagonist Jeff (Angus Macfayden) and his ludicrous journey rarely evokes sympathy or even interest. Watching the films in order, Saw III is a kind of tipping point. From here on the traps and tortures would eclipse notions of character, and the death of John – while a neat trilogy closer – would lead to much floundering for purpose.

It’s really no contest. The original and best. Saw takes the crown and then some. Made with a fraction of the budget of some of the films that followed, it excels because of the verve and drive of its creators. Leigh Whannell – who also stars – and James Wan. The two upstart Australians wanted to make maximum impact with their debut feature and they whole-heartedly succeeded. Utilising a dastardly script that doesn’t cheat and which draws more character shades than any effort that followed, Wan fashioned a grubby but distinctive aesthetic that was aped but never truly recaptured, only gradually bastardised. The central two-hander between Whannell and Cary Elwes is brilliantly played, plus you have future LOST regulars Ken Leung and Michael Emerson rubbing shoulders with Danny Glover(!) in the margins. Tangled and twisty enough to earn the production company’s moniker ‘Twisted Pictures’, Saw remains every bit as staggering as it was on that first, blind approach.