I grew up in the rural South West of England, in Devon. Hardly the anonymous middle-America of Daniel Clowes’ scabrous graphic novel Ghost World but, also, not totally divorced from that milieu either. I could certainly relate to it. The sense of emptiness (both culturally and, in a real sense, geographically), the cynical level of contempt that grows out of boredom and over-familiarity, the repetition…

Nor did I particularly ‘fit in’. Fitting in often meant adhering to the country’s (and especially the countryside’s) binge-drinking culture, meant gossip, meant local sports, meant drugs. I dabbled, sure, with a merry-go-round of friends and acquaintances. But I also felt distant from it all. Separate. Not as in special, just… awkward. I was a hoodie-wearing, slouched-shouldered malcontent who was a little too nervous and nerdy to convince as one of the ‘bad’ crowd. Mostly I exiled myself.

Terry Zwigoff’s film adaptation of Ghost World – which was my introduction to this little microclimate of American counter-culture – landed right before my interest in film geared up. As such I missed whatever opportunity I had to see it locally at Exeter’s Picturehouse (I would assume that it ran for about a week there). I can remember the day I bought it on DVD though (along with blind buys of Mulholland Drive and The Man Who Wasn’t There – what a haul), and how, after watching it, I felt quietly comforted by what seemed also to be a radically slow and depressing film.

Looking back, I probably hadn’t been exposed to too much American independent film at that time. That was all ahead of me. I hadn’t really seen a movie use space and absence to evoke a place or a feeling. Like its title, Ghost World had a liminal emptiness to it that I found disconcerting, far removed from the mainstream teen comedies that were popular at that time (the likes of American Pie or Road Trip). A quietude I’d only really experienced in Sofia Coppola’s The Virgin Suicides. Yet what I found here was something other, even then. Something different. Something for me. 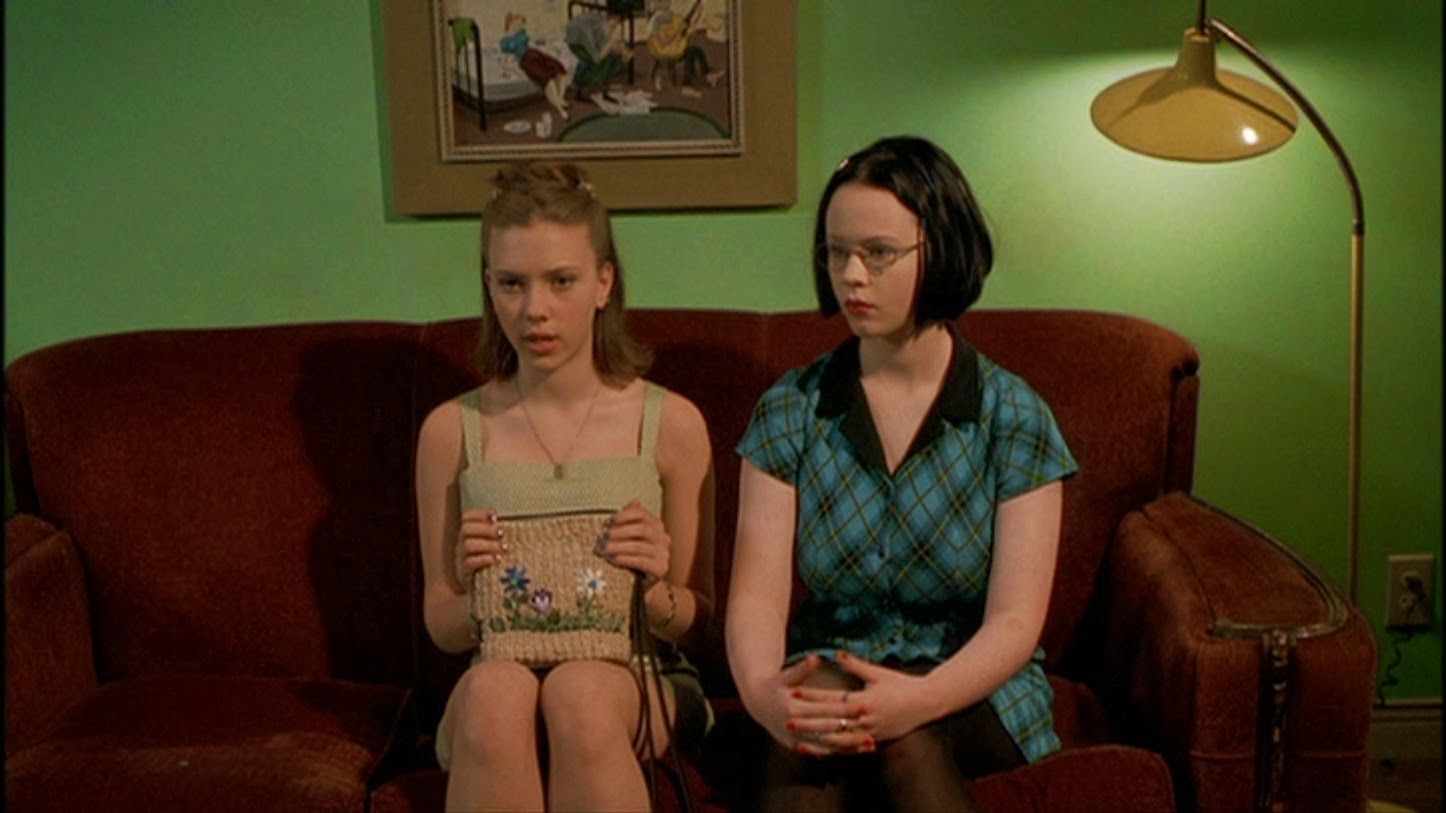 I quickly came to love the film. With only a fledgling DVD collection at that time and long before streaming or the cluttered listings of digital TV channels, that little cache of films were re-watched over and over. Typically, when I wasn’t obsessing over Mulholland Drive, Ghost World would be near the top of the stack for a do-over. In Thora Birch’s sarcastic, grouchy, selfish teenager Enid, I saw characteristics I could relate to, both in myself and that I also saw in my own female friends – outsider-y types, bratty and faux-cynical for attitude points.

Enid and Rebecca’s (Scarlett Johnasson) ‘so over it’ approach to their surroundings definitely mirrored our own worldview through those times. As a doodler and a daydreamer, I also related to Enid’s sketchbook, and have kept similar journals even in recent years, sketching minutiae from my day-to-day with an eye to the humorous or the mocking.

One of the other things that the film understands is a young person’s deep – nay profound – affinity to music. While I’ve come to identify more with Seymour (Steve Buscemi) over the years (I’ve even gotten into jazz), on those fledgling approaches I felt a kinship with Enid as she rocked out to punk in her room, or had one of those epochal moments hearing “Devil Got Your Woman” for the first time; a scene of immediate bewitchment that I have experienced at varying times over the years. That transitory moment of wonderment when you ask the universe, “Where has this song been all my life??” Ghost World also appreciates how personal these moments are, and how, in trying to build and shape our growing identities, we incorporate the posturing of music genres into our own self-presentation. Even if others don’t quite ‘get it’…

Few films have ever seemed so perfectly cast. Buscemi was already exceedingly familiar to me (I’d been devouring the Coen Brothers’ filmography), and the exasperated energy he brought to Seymour seems to be something I have infilled into my own personality over the years (though hopefully without the commensurate sadness, but who knows). We’re initially asked to sneer at him, as Enid and Rebecca do, from afar, to treat him like a caricature. Ironically, it is only when Enid unveils her caricatures of Seymour near the end of the film that we understand how fully the character has rounded and grown in our estimation, as well as hers.

Birch was already known to me thanks to American Beauty, and I was surprised that this largely marked the end of her prominent appearances in film (there are storied accounts in that regard). Picking up Clowes graphic novel after seeing the film, I respected even more the work done and how she brought this character to life. Birch understands the bravado of Enid, as well as the underlying fragility.

And Johansson of course – who also popped up in The Man Who Wasn’t There in that same DVD haul – would explode into mega-stardom a couple of years later in the aforementioned Coppola’s Lost in Translation. Her take on Rebecca isn’t all that far removed from that film’s Charlotte; a little snooty, a little resigned to the life of a pragmatist, old beyond her years.

Ghost World also nails the bittersweet drift that happens after school. The dispersal of people, some of whom have been fundamental in your formative years, who you may never see again. Enid notes it early on as the twosome attend their last school dance, labeling it “totally depressing”. She then charts a long goodbye with Rebecca as they are drawn in opposing directions. Rebecca embraces suburbia and domesticity (she’s so happy with her little fold-out ironing board), whereas Enid isn’t remotely interested in the enclosures of practicality yet. The film ends with her fleeing for a dream life; a romantic notion of escapism that one worries can’t really be fulfilled. I’m a little relieved we don’t have to witness reality crashing down on Enid. That we leave her at the start of an adventure.

And who knows? Maybe she makes it after all. Maybe she’s still out there somewhere… For now there is Ghost World. A cool, defiantly sarcastic sideswipe at the world, but an affectionate one. Colourful and haunting, like those memories of growing up in the middle of nowhere.