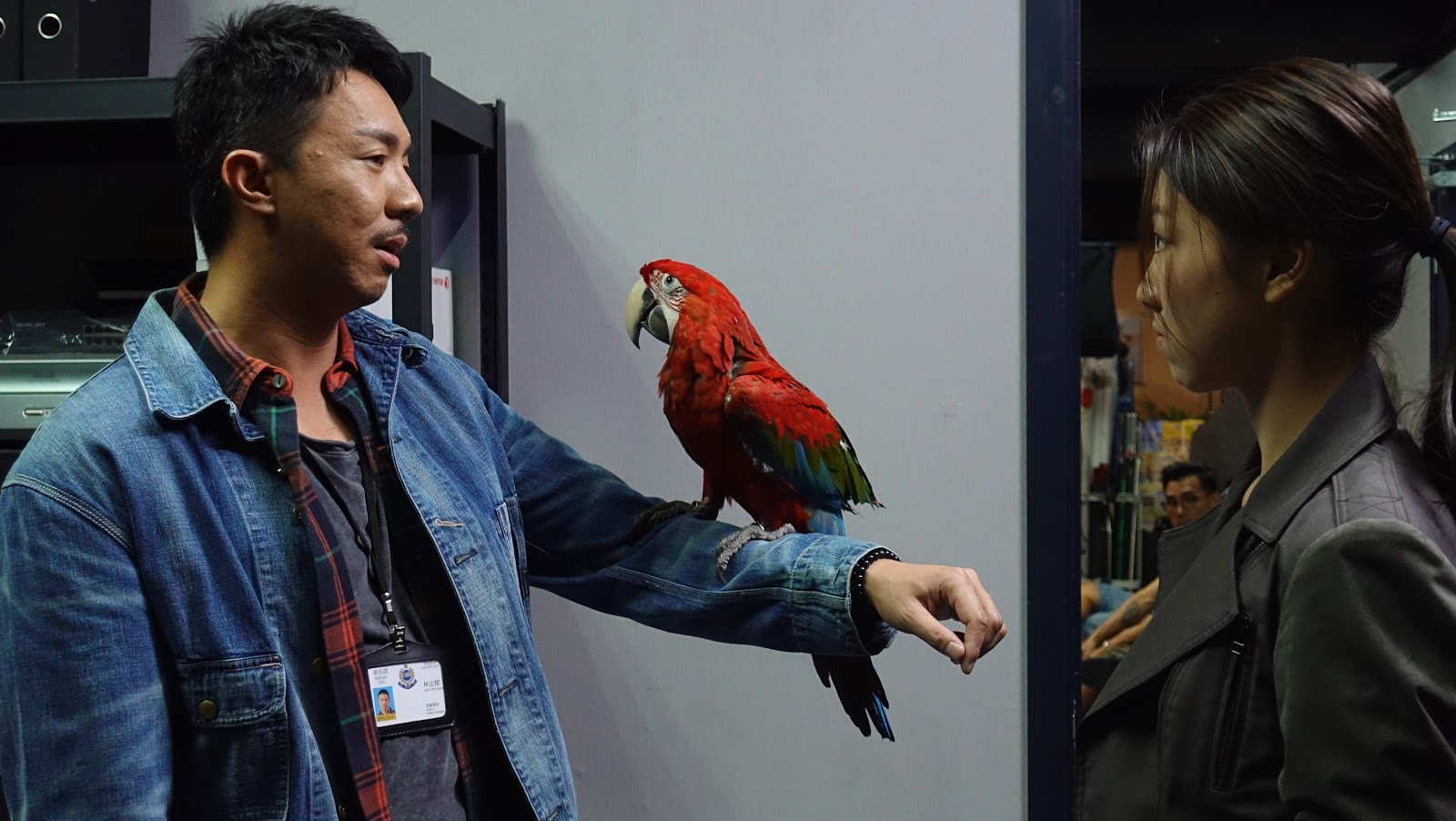 Focus Hong Kong is run by members of the Chinese Visual Festival (CVF) team, and is dedicated to celebrating the amazing cinema and filmmakers of Hong Kong, from early works to the glory days of its reign as the Hollywood of Asia, through to new and exciting films. Timed to coincide with the Chinese New Year, the season of films runs from Feb 9th to 15th, with a diverse selection of titles available online here.

Among the most fresh and accessible of offerings being made available is Fung Chih-chiang’s latest; crafty crime caper A Witness Out of the Blue. The prime suspect in an armed robbery is found murdered in his rundown apartment; the only witness to the crime being a pet parrot. Enter animal loving detective Larry Lam (Louis Cheung). A somewhat shambolic presence and a man plagued by his own problems outside of work, Lam has trouble commanding respect in the department, though he remains faithfully aided by his partner, Charmaine (Cherry Ngan). Lam hopes that he can crack the case, if only he could communicate with said parrot. That proves trickier than he had hoped; the tight-beaked bird seems only willing to squawk the words “genius” or “idiot”. Things get more problematic for Lam when he starts to suspect that his own superior, the well-dressed and respected Yiu (Patrick Tam), is implicitly linked to the murder.

Elsewhere, laying low and key to the whole mystery, is a man named Sean Wong (Louis Koo). Renting a room in a close-knit tenement building, the initially frosty Wong starts to thaw to the kooky and well-meaning residents surrounding him, particularly his money-grabbing landlady, Joy (Jessica Hsuan), who holds a secret of her own. This aspect of the film plays pleasantly against the more broadly comedic central mystery, offering a collection of humane miniatures in light relief to the livelier hi-jinx on offer.

While hardly comparable in its story machinations, Western audiences who were gleefully indulged by Rian Johnson’s similarly spirited Knives Out are likely to find plenty to enjoy here. Chih-chiang’s whodunit aims to emulate the staples of the genre, piling in convoluted sub-plots, oddball characters and red herrings. With ease of viewing always at the forefront of consideration, its never too densely plotted, but comes peppered with noirish aspects that are lightly upended by the preference for broad daylight shooting throughout. Sticking with Western comparisons for those largely uninitiated in the flavours of Hong Kong cinema, Chih-chiang’s energy brings to mind the efforts of Edgar Wright, also. This manifests in the film’s abundant kineticism, humour and occasional nods to the horror genre, without jumping in that direction altogether. On top of that, tongue is firmly kept in cheek throughout, with an irreverence that is kept the right side of goofy.

There’s precious little risk of A Witness Out of the Blue standing still but, just in case, Chih-chiang delivers a well-choreographed action set-piece slap bang in the middle. A protracted shoot-out among a run of derelict factories allows disparate characters to intersect. Key to the success of this sequence is a well-fielded sense of geography. The viewer isn’t left confused about who is where, and it allows the sequence to unfold in a series of connected mini-sequences.

As alluded, this is light fare overall, and makes for an amiable entry point into an interesting season of films being made available to the curious. Zany but heartfelt, it has the feel of a labor of love for those involved; something that quite infectiously translates through the screen. Focus Hong Kong is an opportunity for viewers stuck in lockdown to experience a taste of the less familiar from the comfort of their own homes, while the UK’s Chinese audience can see in the New Year with a selection more representative of their roots than most streaming services will credit them.