Ten years ago, going to the movies got strangely uncomfortable.

Following the smash hit Avatar, 3D became the new fad, with all the big studios (and a handful of curious auteurs) jumping on the bandwagon. This repackaging of an old gimmick had its moment of novelty but, ultimately, was doomed. The wearing of those dark glasses, the suppression of colour and clarity – all for a few vertiginous thrills – created a barrier to watching, rather than aiding immersion. By the mid 2010s it had sputtered into lifelessness.

Why on earth bring this up now? Because going to the cinema has become uncomfortable again. A decade later and – of all things – a pandemic has reshaped the way we engage with art and escapism. To time-capsule this review, if you want to go to a cinema here in the UK, you have to wear a mask throughout. And yes, it’s a little bit uncomfortable. And yes, if you wear glasses, fogging is a bit of an issue too (though I’ll take a little misting to feel the benefit of AC during this heatwave).

But y’know what? If the film is good, it’s all worth it. And unlike 3D – which never let you forget its artifice – if the film’s really good you might just forget about the unusual business attached to your face.

This lengthy preamble is all to seed that Babyteeth is the movie it’s worth going back to cinemas for.

Eliza Scanlen is Milla, a 16 year-old Australian from a comfortably middle-class home, and she is battling cancer. A chance encounter on a station platform introduces her to Moses (Toby Wallace), a 23 year old vagabond and drug addict whom she invites to the family home, much to the muted horror of her progressive parents, Henry (Ben Mendelsohn) and Anna (Essie Davis). Henry is a psychiatrist who medicates his wife for unspecified ills. The stage is set for a succession of volatile domestic micro-dramas. Shannon Murphy’s film is written by Rita Kalnejais and acts as an extrapolation of her own play. What unfurls is a funny, bold and occasionally melodramatic rejection of the “sick teen” weepie that became bizarrely popular over the last ten years.

The performances across the board here are superb. Scanlen imbues Milla with a fizzing contrarian’s zest, but she isn’t bratty or callous with her parents. Really, Milla just wants everyone to get along. Mendelsohn impresses greatly as Henry. The way Murphy utilises him makes one realise how often Hollywood wastes him in one-note baddie roles. Davis gives Anna a precarious mix of mania and motherly concern. Wallace continues this trend, breathing genuine humanity and life into Moses, who could’ve easily come across as a stock character. Kalnejais’ writing takes great pleasure in moments of contrast and contradiction to bolster this (something that also flourishes in the editing). Moses will try and steal from the family one minute, but get poetic over a flower arrangement the next. The writing gives these characters complexity. There’s an inner life to everyone. 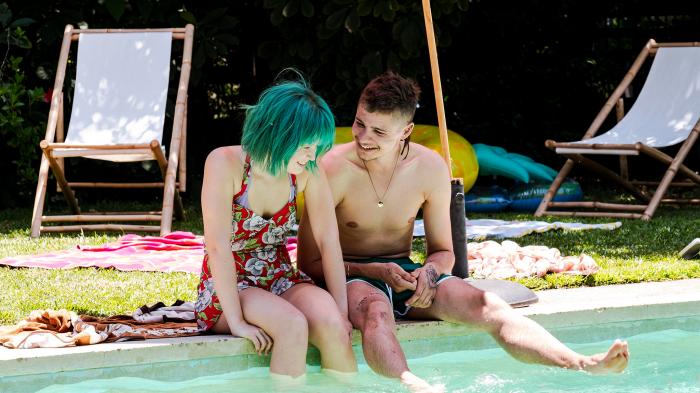 Surrounding the central four are a small network of oddballs, and it is perhaps here that Babyteeth threatens to slip into the ‘twee indie’ trope that so many similarly heartfelt movies have fallen foul of in the past two decades or so. It balances on a knife-edge at times, between the charming and the mawkish, but things almost always tip in the movie’s favour as the principal characters themselves are revealed through their interactions with those on the peripheries.

Music and movement are important assets for Murphy, too. When Milla dances in the home of her music teacher, she appears to be exorcising something from within, yet the scene also accentuates her childishness; her sense of play. In the film’s mid-section, Moses takes her to a party in the city – away from her protective suburbia – and Murphy’s film ascends into a kind of euphoric trance state. Milla’s experiences there feel as profound and personal as a first-time high. Murphy’s deft ear when it comes to source music heightens this already potent sequence on the sheer thrill in discovery.

With so many combustible dynamics set up throughout the film’s episodic structure, it becomes inevitable that the third act will focus on some detonations. Again Murphy navigates her way through a tonal minefield. Milla’s devotion to Moses is wrapped up in her awakening sexuality; for her parents (and for us) there are well-founded concerns that Moses might take advantage of that. And there’s her illness, too. Babyteeth mingles sex and death together in a way that acknowledges their connection without wielding their closeness for shock value. There’s a running commentary here, too, on the effectiveness of medication and how it can be manipulated or even weaponised, but its exact thesis gets a little lost in an emotionally wrought finale.

Mostly, Babyteeth feels like a balmy blast of fresh air into a nook of indie filmmaking that felt as though it had used up all its oxygen. The saving grace here might be the sincerity behind the wry smile. Kalnejais and Murphy treat every character as the lead in their own story and their actors service these needs incredibly well. Moses’ rattail haircut and Milla’s ingenue joie de vivre conjure memories of Shia LaBeouf and Sasha Lane in Andrea Arnold’s American Honey, but the domestic setting is more like a well-to-do Fish Tank. Early (and late) Jane Campion is conjured in the fitful family dynamics and kooky interactions, but Murphy’s own voice rises up above those who may have influenced her journey to us.

Babyteeth both adheres to expectations and shows how absorbing and transcendent a movie can be that dares to vault them.

If you’ve been avoiding a return to the cinema through nervousness and apprehension, this is the film to make the journey for. There’s broad appeal waiting here so long as there’s an audience daring enough to find it. Babyteeth offers the viewer a wealth of emotions to experience, making it one of the most giving releases of 2020. Masks on.

One thought on “Review: Babyteeth”