COVID-19 has been bad for cinemas, undeniably, but also bad for films. While all the summer’s planned blockbusters managed to get a pass – delayed until, yknow, whenever – it is most commonly the lower and mid-budget movies that have been allowed to slip through the cracks into the mire of VOD. Cory Finley’s Bad Education is just such a movie. Based on a true story about embezzlement in the American public school system, it’s not a particularly thrilling or sexy sell, yet it’s being talked of as one of the year’s best and not without reason.

Set in 2002, Hugh Jackman stars as the NY superintendent Dr. Frank Tassone, a widower who works tirelessly to nudge Roslyn High up the national ranks. Thanks to his efforts the school presently places fourth. A planned ‘skywalk’ might even get them to the top of the deck. When a student named Rachel (Geraldine Viswanathan) starts digging into the contractor bids in an effort to spice up a puff piece for the school paper, the cards in Frank’s deck start to slide. Pretty soon, his trusted assistant Pam Gluckin (Allison Janney) is exposed for embezzling hundreds of thousands of dollars from the project; less a Machiavellian scheme than it is a combination of irresponsibility, short-term thinking and the glib assumption that nobody’s gonna notice. Pam is Frank’s friend, and he’s staring a scandal in the face. What if he… didn’t disclose it?

The conversation happening here has wider ramifications, he points out. If the school slips down the rankings, the area’s housing prices will also start to decline. What we start witnessing is the justification of corruption. The normalising of it. Pam loses her job, but no charges are brought forward… so long as she returns the money. Frank chides her, calling her actions sociopathic as he confronts her with a cadre of teachers at his back, but in the same moment he is also shrewdly ring-fencing the problem and rationalising it to himself. Jackman plays it beautifully, and the script feathers in a kind of context for him; Frank is a closet homosexual. Using this as a side-by-side parallel seems problematic at the time as we’re given no other character context for Frank’s decisions up to this point. It feels a little too simplistic. This equals that. It’s a rather sour note in an otherwise smart, witty and even-handed exposé. Still, I would not characterise the film as homophobic. It is not intended as a generalisation.

Pam, meanwhile, finds her life falling apart. Bad Education doesn’t excuse her actions, but it deftly examines the pressures put upon her to live in and provide a certain level of comfort and prosperity. The pursuit of the middle-class lifestyle demanded by her peers and, more pressingly, her family. Janney is, of course, excellent. Pam can seem unapologetic and deeply ashamed, often within the same shot. 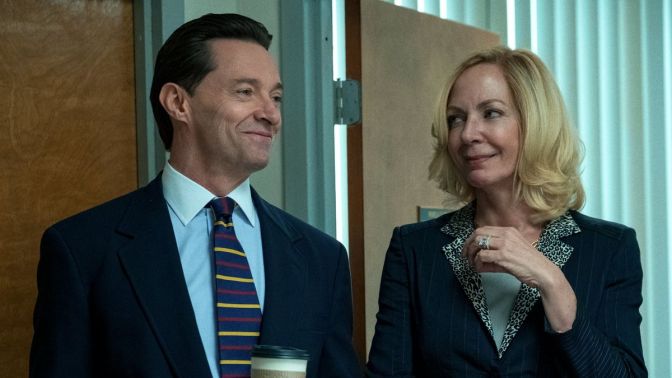 And then there’s Rachel, still asking questions, because she wants to be a journalist and she’s been taught to act with integrity. An hour into the film and the revelations aren’t over. She suddenly finds herself in the midst of the kind of corrupt politics that most kids don’t have to deal with. Her coming-of-age story is a loss of innocence as her eyes are opened to the breadth of hypocrisy in the seemingly safe and prosperous suburbs around her. You could argue that Cory Finley’s film is just as damning a portrayal of American suburbia as more sensational titles like Blue Velvet or Polyester. He just dresses it up differently.

Finley impressed greatly a couple of years ago with his acerbic debut Thoroughbreds (check it out!). Bad Education is an equally assured film, maybe even more-so because of how unassuming it appears on the surface. For context, consider Alexander Payne’s transition from Election to About Schmidt. Finley is similarly able to switch from sexy dark comedy to a more measured, even seasoned sensibility and retain a sense of fine artistry. His own investment in the material – regardless of it’s commercial viability – is communicated through the screen, creating magnetic and interesting work.

Insider trading is referenced in a frank conversation between Rachel and her father, and of course with the benefit of hindsight we can place this 2002 drama in the context of the financial crisis that would hobble the economy only 5 years later. Bad Education is about a climate of complacency. In all this Finley never looses sight of the human factor. His film may judge these people, but it understands them also. That’s a necessary act if we’re to institutionalise something better in people, something we see, optimistically, in Rachel.

Maybe some hard lessons are worth it after all.