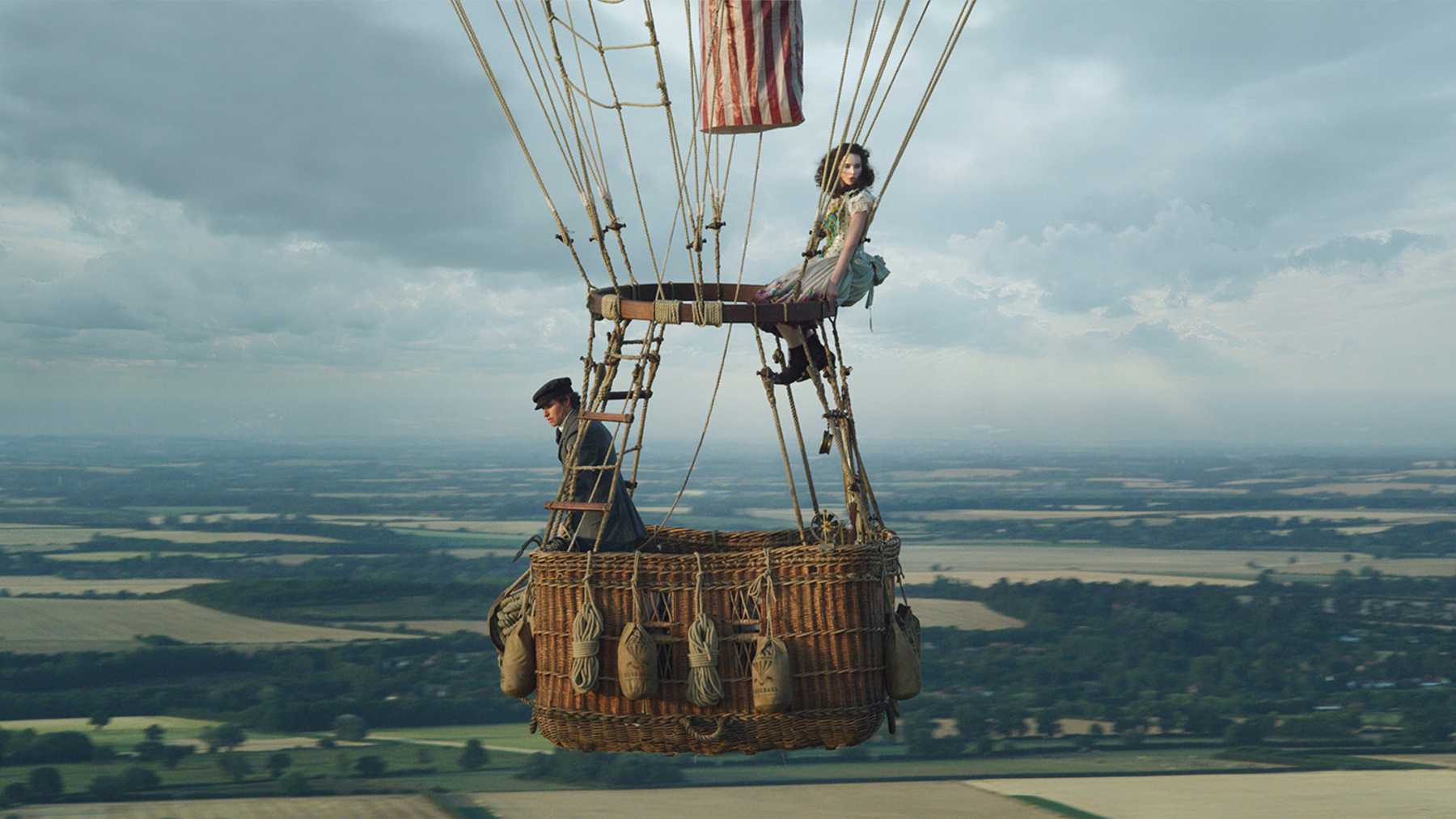 It’s time to get giddy with vertigo as the moment we’ve all been waiting for finally arrives. That’s right, BAFTA botherers Felicity Jones and Eddie Redmayne have been reunited for another thoroughly British dalliance. These are actors recognised for their abilities (not entirely unjustly) who have also, sadly, become poster children for mawkish, rose-tinted prestige period pieces whose earnest yearn for statuettes undermines any sense of genuine artistry or emotional impact.

The Theory of Everything was a pretty good film, all told. But its remembered as a poor one exactly because of this sense of pandering.

Tom Harper’s a director of modest pedigree – last year’s Wild Rose was thought of very highly – and The Aeronauts veritably leaps into the air with a bravado opening. Well, I say bravado… There’s a pearly urchin and some glitter.

It’s 1862; laughing-stock meteorologist James Glaisher (Eddie Redmayne) has lofty dreams of changing the world through predicting weather patterns. To further his research he is compelled into the air, having convinced acrobatic pilot Amelia Rennes (Felicity Jones) to take him there in a state-of-the-art balloon… this after she lost her husband in a traumatic ballooning incident. Glutton for punishment that she is, Amelia certainly knows how to impress a crowd, turning their launch into her own personal circus routine.

It’s an energetic way to start the film, but it means context has to be filled in later; something which frequently cripples the intended sense of peril and tension roped into their rickety wicker basket.

Ascending through a storm isn’t the brightest move for a meteorologist, but again this allows the picture another of its intermittent flashes of immediacy… Too bad Harper’s approach to documenting action is so confused. In fact, far more knuckle whitening are the moments before our intrepid duo hit the storm. Both Amelia and James have a cavalier fondness for leaning out over the edge of their basket, hands free. For someone with a pronounced fear of heights, this behaviour was as maddening as cinema has possibly gotten this year. No horror film in 2019 has upset me this much.

Redmayne isn’t quite as awful as he’s sometimes prone, though when the altitude starts getting to him, James starts losing his head in a manner that calls to mind some of the choices seen in Jupiter Ascending. But you know what… anyone thinking of going to see The Aeronauts from a position of irony, or for a ‘hate watch’, might just find themselves caught up in its glossy adventure. In spite of a number of readily questionable choices… its fairly spirited.

Mainly because Felicity Jones – as usual – stomps around the picture with enough confidence to keep you invested. As James quietly folds up in the corner of the basket like a discarded tissue, Amelia mounts the balloon for a tense and fun little EVA. It’s the peak of the film’s sense of adventure, and comfortably its most involving stretch.

The sense of investment occurring only in fits and starts comes from the frustrating decision to pepper their journey with more flashbacks and more daddy issues than an episode of LOST. While its nice to see the likes of Rebecca Front and Tom Courtenay, their roles are little more than cameos, and these dips into the past mostly shatter any sense of immediacy in the balloon. One wonders if The Aeronauts might’ve been better arranged chronologically, with the pair’s flight providing more claustrophobic and consistent second and third acts…?

The film is plummy, and glossy, but its also rather fun. Fun because of the silly melodramas that occur in a wicker basket while Harper’s camera gets shoved inelegantly into his stars’ faces. Fun because while Amelia can lob as many bags of sand out of the balloon as she likes for altitude, there’s no getting rid of the pounds of blue cheese weighing down much of the dialogue. Fun because – for precious few moments – Harper tries to conjure PG-rated sexual chemistry in a hot air balloon that’s been in flight for 17 minutes.

It’s a bumpy ride for all concerned with a landing that’s fittingly rough. The Aeronauts doesn’t nearly have the capacity to join the ranks of the decade’s best adventures off terra firma (Gravity, All Is Lost etc), but its sputtering silliness and flimsiness are quaint, making it a modest treat. A little film that’s tough to get too cynical about.

I don’t really believe in the concept of a ‘guilty pleasure’ movie, but this makes a featherweight case for the term. Plus I got to see the Cats trailer in the cinema, which was worth the admission fee alone, regardless of this movie.