Since 1988 Don Mancini has been writing the ‘Chucky’ movies; a horror franchise that grew – somewhat improbably – out of original flick Child’s Play directed by Tim Hunter. Arriving after the slasher boom, Child’s Play is one of several high-concept horror ideas dotted around the late 80’s and early 90’s, a time when the genre was struggling to find new ways to evolve and grow. Here, a friendly-looking ‘Good Guy’ doll is imbued with the murderous soul of serial killer Charles Lee Ray (Brad Dourif) through a voodoo ritual. Over 30 years and through 7 films, Chucky has terrorised families, army cadets and even bona fide celebrities. He’s even had time to start a family.

The involvement of Don Mancini throughout is a rarity for a horror series. Creators may often stick around for one or two instalments, but more commonly the material is passed on as studios milk titles for all their worth, usually leading to a spiral of decline. Mancini’s resilience has seen the series largely buck this trend, however, and he’s even directed the three most recent episodes.

Now, a bolshy and controversial remake is nearly upon us (starring Mark Hamill and Aubrey Plaza), one which has locked out the series’ creator and its faithful returning cast members (who has been quite vocal against this move). We’ll find out soon enough if this gambit pays off but, for now, here’s the original 7, in reverse order of quality, courtesy of The Lost Highway Hotel…

The only real misstep in the series is Mancini’s second directorial effort, which appeared nearly a full decade after the prior film, Seed of Chucky. This sixth entry feels like a misguided attempt to steer away from the bratty, comedic post-horror phase of the prior two instalments, instead aping Hollywood’s still in-vogue preference for the sombre and the ghostly. Trying new things has kept Chucky going, but this was a poor fit. Curse isn’t bereft of charm – it brought Fiona Dourif to the expanding roster of regulars – but it feels self-consciously muted, especially coming after the more outrageous sequels. Haunted houses and cheap jump scares are best left to The Conjuring Universe. Fortunately, Mancini changed tack again after this one.

Speaking of which, here’s the most recent of Mancini’s films. Cult Of Chucky still feels a little muted, but only in terms of the sleek, washed-out hues of its setting; a psychiatric ward. Multiple dolls turn up in this entertaining hat-tip to the entire run, as Mancini juggles the various convoluted strands of Chucky’s history by this point. Jennifer Tilly reprises her role and there are even a couple of surprise guests from earlier in the series, while Fiona Dourif looks a lot more confident with the cracked material. It’d be a shame if this turned out to be the last time Mancini got to play in his toy box. 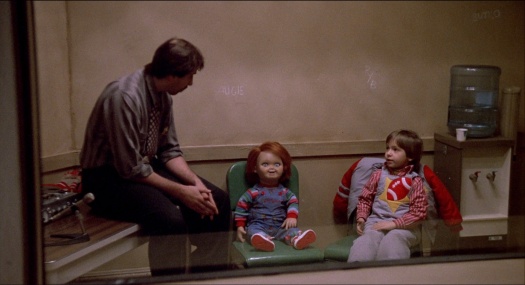 Going back to the beginning already seems unusual. Horror franchises tend to start out strong and then degrade over ill-advised sequels. Its a testament to how Mancini has allowed the series to evolve that the first flick features here on the list. And it isn’t half bad. All of the groundwork is here, after all. Charles Lee Ray is trapped in the Chucky doll and let loose on poor Andy Barclay (played by the young Alex Vincent). Dourif’s shit-talking vocal work sets a tone that would remain consistent for its antagonist, at least. He really is a bastard and Dourif plays full tilt into that. Overall the film is solid, but when set beside some of the sequels, it lacks the crazy ambition or over-the-top set-pieces that came to be synonymous with this terrible doll and his exploits. If you’ve only seen this one, you might well wonder how Chucky has lasted so long.

You might recognise Jack Bender’s name more commonly from hit TV shows like LOST or Game Of Thrones. Way-back-when, however, he took the reigns of this under-loved third film in the series, which sees Chucky menacing an army cadet school that an older Andy Barclay (Justin Whalin) is attending. It’s unfortunate that Whalin is now better known for playing Jimmy Olsen in the 90’s Lois & Clark TV show, but Child’s Play 3 is peppered with memorable supporting players, and has enough fun tricks up its sleeve to keep everything interesting. As threequels go, this is one worth reassessing. It has a sturdy B-picture vibe that remains quixotically appealing and the change of setting gives it a uniqueness in the series.

Child’s Play 2 remains popular among Chucky aficiandos for a couple of reasons. The first is the prominence of new character Kyle (Christine Elise) who has gone on to become a fan-favourite over the years, despite only ever appearing again once in what amounts to a cameo at the end of Cult Of Chucky. The second is that, after a relatively humdrum first hour, Child’s Play 2 goes bananas in an extended final act set inside a toy factory; a sequence that sits well beside some of the more imaginative product designs found in horror and fantasy films of the late 80’s (think Tim Burton or wildly weird films like Toys). Ultimately jam-packed with kooky ideas, this is arguably the film that lent the series its longevity.

This is probably a contentious placement for Seed of Chucky, which is often cited as the worst offender in the series. Time to reassess. Seed is Chucky’s most outrageous entry, knowingly doffing its cap to the trash cinema of Ed Wood and John Waters (who has a significant supporting role here). Seed takes Chucky’s post-horror leanings to new extremes. Jennifer Tilly plays herself, as does rapper Redman, and the two are terrorised by Chucky and his reanimated flame Tiffany (also Tilly).

Bride Of Chucky is a fucking blast. Riding in on the success of Scream, a new level of irony was injected into the series, something that sits exceedingly well with the anarchic humour already long established in these films. Guest director Ronny Yu covers the film with that deliciously dated gun-metal sheen so popular in the late 90’s and early 00’s. You can tell this is the guy behind Freddy Vs Jason. Yu’s trashy, fetishistic approach makes Bride a lascivious joy to behold. Jennifer Tilly makes her first appearance in the series as Tiffany and aces it (90’s Tilly will always be my jam) while Bride takes a knife to Chucky’s wretched misogyny while also having the gall to double-down on it. There’s also some fun deconstruction of the American outlaw myth at work here in the human elements of the story, particularly a thread starring, of all people, Katherine Heigl.

Seed remains the most thematically progressive and experimental, but for pure entertainment value, Bride is the queen.

One Reply to “Ranked: The ‘Chucky’ Films”