Four years ago, Wes Anderson’s The Grand Budapest Hotel consummated a two-decades long romance with the general public, catapulting the director from cult favourite to widely renowned populist. His clutch of exceedingly idiosyncratic movies now appear revered as treasures. Everyone’s list of top Wes Anderson movies differs, showing his ability to capture the imaginations of all-comers. Despite the seeming identikit craft of them, they all have a slightly different pitch.  Even critically the only thing approaching general consensus is that his earlier, more melancholic pictures are probably better. Probably.

Said melancholy returns in Isle Of Dogs, his ninth feature and the second brought to us in stop-animation (following his superb adaptation of Roald Dahl’s Fantastic Mr Fox). It’s comfortably his best since (from this reviewer’s perspective, of course; other opinions will be available), and a large part of that is thanks to the sense of emotional connectivity it sparks following a couple of increasingly silly live action adventures.

The medium itself suits Anderson to a T. If any trait can be attributed to all of his movies, it is his relentless exactitude. Everything has to be just-so and in its right place. Anderson favours a busy, flat frame, with characters lined up as though outlined in a child’s drawing. His live action films often feel claustrophobic with detail; his actors delivering monotone lines while trapped in some elaborate diorama.

With animation, Anderson can take this obsessiveness and ratchet up the control, adjusting every gesture, every hair to suit his preference, and so it goes here. Every filmmaker must allow for the happenstance of their profession, but dear ol’ Wes is doing his level best to rule out such notions all together. While the gestation of the story may have been improvisational, once it was locked that compulsiveness clearly kicked in.

Anderson started with merely the notion of dogs living in piles of garbage and the urge to set something in Japan. With the assistance of prior collaborators Roman Coppola, Jason Schwartzman and Kunichi Nomura, the tale of Isle Of Dogs was set.

Some years in the future, and a viral strain has led cat-loving Mayor Kobayashi (Kunichi Nomura) of Japanese archipelago Megasaki to banish all canines from the mainland; they have been exiled to an island of trash. To show his commitment to this process, the first to go was his own family pet Spots. However, his young ward Atari (Koyu Rankin) misses his former guard dog so profoundly that he steals a plane and flies over to rescue him. It is in this capacity that he meets a pack of dogs eking out a life on the trash pile of shame.

The exile of the dogs, blitzed through in set-up narration from Courtney B Vance, can’t help but draw uncomfortable parallels with the plight of the Jews at the hand of the Nazis, and one might blanch at the suggestion that Anderson is trivialising such genocide. Instead he manages to draw a comparison to the ways in which we abuse and molest the animal kingdom for our own gain (see a defunct medical testing centre which features prominently in the film’s second half). Anderson instills trash island with a forlorn sadness. It is a land of ghosts, in which even the terrain itself is but an echo of a former existence.

Anderson has chosen to leave all human characters speaking in their native Japanese and as often as not their conversations are not translated for non-Japanese speaking audience members. The dogs, however, are voiced by English-speaking actors (and will be dubbed accordingly when the film airs in non-English speaking territories). Wherever the film lands, however, the Japanese portions will remain as-is.

In part this is intended to comment on language itself, and the assumed bond of understanding between owners and their pets, relationships that rely on intonation and expression to cross the barriers of species. It is also a credit to Anderson that he honours the Japanese dialect by deferring to it so readily. However the lack of translation, while attributable to the above intention, also risks alienating swathes of audience members. One could argue that the voice of these Japanese characters has been silenced for anyone who isn’t privy to the language. Having said that, Anderson does due diligence for his narrative; even if you don’t know the words, the intent is always made clear. 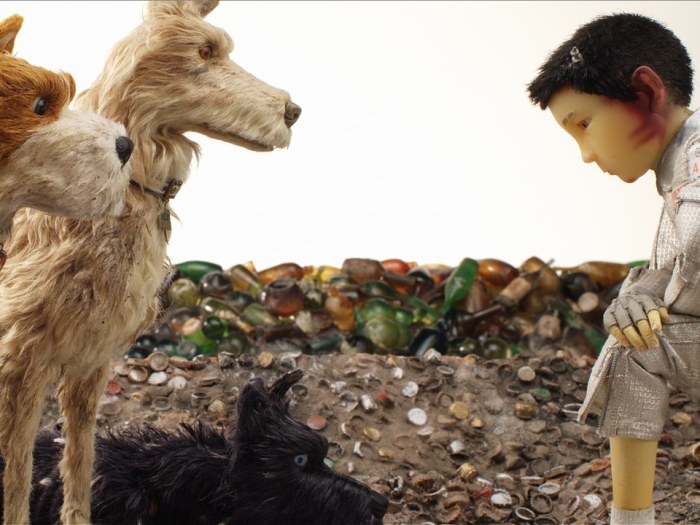 Anderson clearly has a love for Japanese culture, even if it is the appreciation of an outsider, thus the trinkets and tokens of the nation he has perceived are fed back into its depiction with about as much nuance as an episode of The Simpsons. But this never feels as though it comes from a place of malice. This is his love letter to another culture and is intended as heartfelt and enthused. There’s a degree of mockery, but Anderson keeps things jovial and good-natured as always.

Indeed, after the harebrained farce of Grand Budapest, Isle Of Dogs feels positively (and welcomingly) restrained. Anderson brings the funny, but its more akin to the wistful humour of Rushmore or The Royal Tenenbaums; more likely to draw a wry smile than an involuntary cackle. Personally speaking, this is the brand of comedy I prefer from him, where the sweet and the sad go hand-in-hand (or hand-in-paw).

This is also a love story. Atari may be searching for his lost dog Spots, but in the main this is a non-romantic meet-cute between a 12-year-old boy and a stray called Chief (Bryan Cranston). Leader of the pack, Chief is a mangy, belligerent old thing who calls no man his master. Over the course of their journey together, this will change through a shared sense of dedication and integrity. As Atari simply puts it in a ‘haiku’ that’s nothing of the sort; “Whatever happened / To man’s best friend?”

While the animation is top-notch (on a par with if not outstripping Fantastic Mr Fox), the MVP of Isle of Dogs might just be Alexandre Desplat. The recent Oscar winner here provides a varied percussive score that drives the simple narrative forward. With its minimalist rhythms, Isle Of Dogs comes to feel like an airy, spacious film – traits not normally associated with the world of Wes. It suits the material exceedingly well, conveying a loneliness while also maintaining momentum.

Said story is doggedly (sorry) realised in passage from left to right as is the very nature of Western narration. In form, Anderson remains an American. And while Isle Of Dogs may nod visually to Kurosawa (though more often Sergio Leone seems like a key reference), it remains, through and through, an American picture. But it is a smart, funny and yes, melancholic one, and while we all might argue over which takes the top spot, this has every right to feature in the upper tier of movies baring the Wes Anderson name.