The cinema of Guillermo del Toro has forever been a realm inflected with the strange and macabre. When captured in interview, the exuberant Mexican auteur often speaks with fondness of the creature features and monster movies that so influenced him as a child, and repeatedly this obsession with the freaks and geeks of yesteryear manifests in his work (why do you think the subject comes up?).

Yet in recent years his output has felt a little lukewarm, and his films have divided opinion more regularly than they’ve amassed consensus. Though daftly enjoyable, the plastic neon of Pacific Rim feels like an outlier in his filmography, while Crimson Peak stuttered at evoking the shudders it intended.

The Shape Of Water looks set to redress this balance somewhat, endeavouring to be all things to all comers. Its another tale of the supernatural splashed with bloodletting and cruelty, but these acts are framed within a rosy romance and wrought in the luxurious colour palette of Jean-Pierre Jeunet. Del Toro’s cinema often feels as though its of another time and sensibility; a place projected toward us from his boggling brain. Here, however, it feels like a place we’ve been invited to visit, and rarely has the invitation been so warm.

Set in Del Toro’s own refashioning of 50’s Baltimore, Sally Hawkins stars as mute janitor Elisa Esposito, mopping floors at a government facility that houses curious marine life. The status quo there is rattled by the arrival of a new acquisition; an amphibian man (Doug Jones) captured in the Amazon (somehow) by Michael Shannon’s typically unhinged Richard Strickland. Wielding a cattleprod as though it contained the might of the US government, Strickland mistreats the beast to appease his own sadistic temperament, losing two fingers for his trouble. Unbeknownst to the doctors or the military bigwigs, however, Elisa forms a more constructive bond, through generosity, genuine interaction and sign language. Before long an improbable romance is kindled.

Compassion is Del Toro’s main concern here. Shannon’s Strickland is a seething ball of villainy; an obvious, odious cartoon baddie. Lunkheaded he may be, but Del Toro is keen to paint here in broad strokes as he manifests a modern fairy tale for grown-ups. Fairy tales require archetypes. Strickland’s roiling menace is contrasted by Elisa’s kindness, which of course yields more positive results. Her efforts do not go unnoticed; Michael Stuhlbarg (seemingly in everything this year) plays Dr. Hoffstetler, a biologist whose own secret otherness engenders a will to do right by their aquatic guest (let’s call him Gil). Over and over it is the outsiders who we feel compassion for, whether the prejudice against them be beastial, ideological or racial.

I mentioned Jeunet with regards to the colour palette (all teals and hot oranges, with dollops of red like strawberry jam), and the French director has had no qualms about calling Del Toro on his open ‘homages’ to Delicatessen. But the film I was most often reminded of is Amelie. Elisa lives above a cinema (of course) next door to an aging artist played by the rarely lovelier Richard Jenkins. Their relationship with one another, right down to his painting and tentative nature, recalls the one between Amelie and the reclusive Raymond Dufayel in that film. Jenkins’ character Giles is gay, and his sidestory involving a crush on a counter boy at a patisserie might seem like an unnecessary deviation, but it is a fine counterpoint to the central tale; a tragic fantasy underscored by unwarranted hostility towards ‘others’. 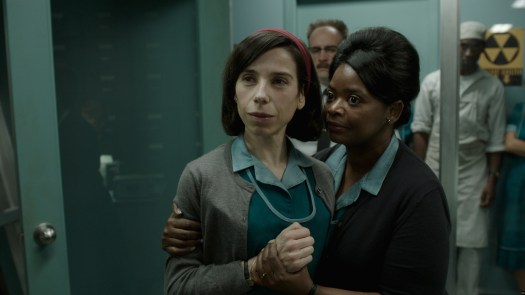 Jones’ work as, ahem, ‘Gil’ is wondrous. Ably assisted by both a stunning costume and some state of the art CG manipulation, his contribution should reopen the question of how such performances are measured. He ranks equal with Andy Serkis as cinema’s most malleable and expressive under such frequently unusual circumstances. Between the two of them, Jones and Hawkins are quite the silent double act. Del Toro’s film is almost as loving a throwback to silent cinema as The Artist was, even if, like that movie, there are little cheats to be had.

Being that this is a fairy tale recast, the story plays in big, simplistic beats. This isn’t at all to its detriment, as it invites a level of comfort that Del Toro frequently manipulates wickedly. The Shape Of Water is not kid-friendly, from its devilish peppering of grue to its openly sexual escapism. Its no kooky happenstance that Elisa’s daily routine involves masturbating in the bathtub. Del Toro is keen to cast her as a sexual being and not a childlike wallflower. Establishing this pays dividends as the film explores the sensuality of romance. Cinema hasn’t gotten this hot under the collar about the pairing of a woman and a fish since Uncle Boonmee Who Can Recall His Past Lives.

Such raunchiness charms just as well as the film’s open sentimentality. Again in keeping with the genre and its classic forebearers, all of the emotions here are writ large. It’s as bold as the visuals. Del Toro’s extravagance can sometimes read as garish, but here it compliments the material in a strange way. This applies to the openness of the emotional cues Del Toro runs us through just as it does the luscious production design (which owes a debt, in places, to David Lynch’s Dune; that lab is like a Harkonnen medical bay.)

Though it may sound like a warped prospect, this Poseidon adventure has all the hallmarks of a crowd pleasing classic. As much as Amelie. As much as Hawkins’ other recent success factory Paddington 2. Those broad strokes are played for the masses. This is populist cinema at its most raveshing and certainly the film you’ll most likely find your pals pestering you to see once they’ve gotten their fill. Do yourself a favour and listen, or get there first.

2 Replies to “Review: The Shape Of Water”