“Two hours alone with me? What a drag.”

I’m paraphrasing lines from Besson’s script here, but they’re about as close to a self-diagnosis as Valerian And The City Of A Thousand Planets gets. With a budget in the region of $170 million, Besson has been entrusted with this somewhat obscure space opera material to reinvent as his own; apparently a passion project he’s been trying to get made for years. The source is a French comic book entitled Valerian and Laureline by Pierre Christin. We can only guess as to why Laureline got bumped from the title, but it’s just the first in a sequence of the horrendous decisions that plague this lumpen, interminable mess of a film.

In case you can’t guess from my tone, I didn’t enjoy it very much.

Set some 400 odd years in the future (curiously a time with retrograde gender politics when compared to the present day) and the International Space Station has grown in size to such a degree that it has been boosted out of Earth’s gravity and now drifts around space like a barge piled up with garbage. It’s become a meeting place for all kinds of alien races; an ugly-ass trading post and venue for diplomatic meetings between species. It’s called Alpha.

Intergalactic government agent Major Valerian (DeHaan, staggeringly miscast) is an arrogant cross of James Bond and Captain Kirk, except stuck in the scrawny body of a – what? – a teenager? He sure has the maturity of a teenager, and much is done to make Valerian seem as though he’s about seventeen years old, but he has a ‘playlist’ of conquests behind him and a career and reputation that’s at least 8 years in the making. His partner is Sergeant Laureline (Delevigne). Valerian spends half of the movie whining that she won’t sleep with him as they go through the motions of investigating a strange force that has rocked up on Alpha; a sort of wibbly wobbly wall that Commander Filitt (Clive Owen) finds very threatening.

Could it possibly have anything to do with the film’s seemingly incongruous piece of side-plotting in which we see desert-paradise Mul getting devastated by the fallout of a war that has nothing to do with its cultured inhabitants (basically the Zoras from the Zelda games)? Yes, yes it does. And as the first hour shuffles the pieces around, neglects to develop characters and generally works its hardest to disengage the audience, Besson’s colossal folly starts to reveal itself.

He’s done silly looking sci-fi space opera before with The Fifth Element – a film which divides opinion – but Valerian is likely to court far fewer ardent defenders. It’s just so boring. This despite Besson pouring all of that money into creating multi-coloured visual wonders for us to feast on. It’s brightly coloured and very, very loud, but this bluster is presented without dexterity and we’re afforded little to no reason to care regardless. There is great creativity involved in the work here, and the misguided confidence that these effects won’t date disastrously is endearing in its own deluded way, but the result is that everything looks a bit plastic-y. Too smooth and weightless. There’s a garish maximalism to Valerian, which is entirely Besson’s thing, but it makes a cluttered experience feel like a total void because of what’s been sacrificed to create it. 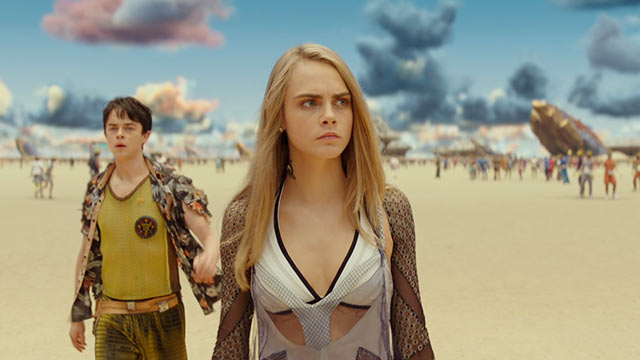 Valerian‘s desperation to appear wholly original and awe-inspiring in its visual flamboyance exposes how little it actually  has to say or to show. The narrative arc is basically that of a Bond film, even down to Laureline getting relegated to the damsel-in-distress role for the second act in order for Valerian to rescue her with the assistance of a shape-shifting prostitute played by Rihanna. The pop star gets to dance (again, CG assisted) but her acting efforts here are likely to afford her a Razzie nom. The character isn’t allowed a lot of time, however, and is conveniently if callously removed from the picture before too long. The only person who seems to understand the tone that might’ve saved this thing is her pimp, played by Ethan Hawke. He seems to be finding the whole thing hilarious. Too bad he’s the only one as everybody else wears a furrowed brow when they’d have been better off acknowledging this nonsense.

Very quickly one gets the sense that this is the kind of spectacular failure that’ll sit beside the likes of Jupiter Ascending and Ender’s Game within the genre – another example of potential squandered on a massive, massive scale. The mechanics of the film – its technical prowess and the specificity of the world building – take up so much of Besson’s attention that he seems to have totally taken his eye off of the human element. In short, the characters just aren’t there. DeHaan will likely take the most flack. He’s a good enough actor when the role fits him, but this one most certainly does not. All we know about Delevigne’s Laureline, meanwhile, is that she has to put up with Valerian. It doesn’t take a genius to notice the lack of a big-named bad guy, so all eyes quickly fall on Clive Owen who, let’s face it, has the dynamism of a butter knife. It’s hard to tell if he’s a poor man’s Jack Davenport or whether it’s the other way around.

The film occasionally stutters into life and finds a sequence or two that play well enough off of one another to spark some sense of momentum, but the flames of hope are soon smothered as things roll on and on and on. Valerian isn’t two hours; it’s two hours and fifteen. But Besson makes it feel like about double that. As with anything with this much money behind it, there’s also clearly the intention for this to start a franchise. On this evidence those dreams will be dead in the water once the word gets out and box office rapidly diminishes. A young adult folly that’ll probably seem babyish even to the teens it’s desperate to attract, honestly, I think I’d rather the Divergent series hadn’t got canned.