The Florida shoreline is an intrinsic part of Barry Jenkins’ Moonlight; the steady rhythms of the breaking waves setting a pulse for the film. Jenkins pushes the sound deftly, rekindles it, has it play in dreams. The relaxed rhythm reminds the viewer of breathing. In and out. In and out. And so Moonlight feels like a film that breathes. It feels alive.

The story divides neatly into three acts, spanning two decades. We are presented one man at three stages in his life; childhood, adolescence and adulthood. The man is Chiron. He is African-American, he lives in poverty with his drug-addled mother (Naomie Harris), he is awakening into his sexuality as a gay man. Moonlight documents three specific points in his journey.

So many things impress here. The care and attention to casting, which runs fluid through the film, for instance. By its nature several roles require recasting as events time hop, not least Chiron himself, played by Alex R Hibbert as a boy, Ashton Sanders as a teen and Trevante Rhodes as a grown man. Each actor commands his portion of the narrative, and the character is acutely defined by Jenkins. He is a quiet soul; though through the eyes in all cases one senses the tempest of inner turmoil, yet there is a sustained stillness to Chiron. He is a man who lives two lives, an outer and an inner one. In his younger years he seems wise beyond his age, though, heartbreakingly, a significant event in the film’s middle section appears to stunt him. Rhodes’ final appearance as Chiron years later is the most transformed of the three. Physically the character has changed significantly, but Rhodes still channels the same stifled strength witnessed in his fellow actors. As a piece of time jumping trickery, it convinces wholly.

Everyone shines here. Though Harris is the most classically ‘showy’ of the performers (and this isn’t a mark against her), there is such a wealth of talent offered forth that Moonlight becomes a joyous embarrassment of riches. Mahershala Ali has gained notices for his work in the first third as Juan, the drug dealer feeding Chiron’s mother’s addiction who also becomes a surrogate father figure to the boy. Ali has a body of great work under his belt already, and Juan is one of his greatest. He finds Chiron hiding from bullies in a vacant building. Juan coaxes Chiron out, feeds him, talks to him and, in a key scene with another notable player (Janelle Monáe as Juan’s partner Teresa), he helps the boy understand himself.

In the mid section the astonishing Sanders is joined by Jharrel Jerome. Jerome plays Kevin, friend to Chiron and object of complex and hesitant affection. They share a scene on the beach with those aforementioned rolling waves, basked in moonlight. It is the burning centre of the film, perfectly played, sexually kinetic yet restrained. Jenkins doesn’t overplay his hand. The scene plays in looks, in the textures of sand, a gorgeous shot of the actors from behind with the sea twinkling. Latterly the role of Kevin is picked up by André Holland, arguably most heartbreaking of all. The two characters reunite after years, separated by circumstance. Jenkins expands time here. The final third is the longest, but in the best possible way. Every gesture, every pause is deliberate, speaks volumes.

The camera is vital in Moonlight. It feels alive. Cinematographer James Laxton often places it beside his actors. At the beginning, when young Chiron hides in the vacant building, the character peeps out through a gap in the covered windows, then so too does the camera. We’re Chiron’s accomplice. We’re in the scene too. Elsewhere and with far more frequency, the actors are framed in such a manner that the world around them is out of focus. Though Moonlight has a firm sense of geography and is rooted in its Floridian environments, the world around Chiron and co is often a blur. A smudged place. It intensifies the characters, but also places them in a world of uncertainties. It’s ambiguous. 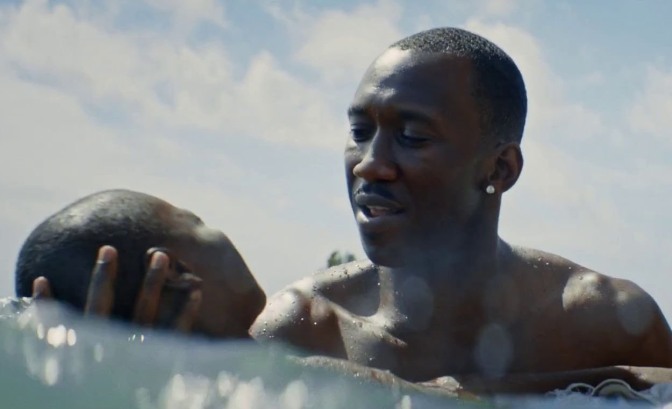 Jenkins’ film is extraordinary and absolutely one of the best modern films I’ve encountered in years. It’s a coming of age story but it’s also a romance. Several of this decade’s most notable, respected and beloved romantic films have concerned themselves with homosexuality. Blue Is The Warmest Colour and Carol stand out. These examples focus on women. Films about gay relationships between men are less common because the film world is still geared in its majority toward masculinity and maleness. Gay men in film are therefore perceived as threatening. It’s nonsense, of course, and Moonlight will hopefully go some way toward bringing on a sea change in this regard. We’ll see more conversations in cinema. Art reflecting the mutating status quo.

The sexuality in the film is key to its ability to capture us; it creates tension and suspense. Knowing that admitting his feelings toward Kevin might bring on severe repercussions makes us yearn for Chiron regardless of our own sexuality. We understand the plight and sense of risk he feels entangled in. We understand the fear of rejection and more. Moonlight is a deeply empathetic film because of this. Jenkins places us in the circumstances of his characters. Coupled with his well-defined sense of restraint it allows the film to bloom. It doesn’t feel at all sentimental or manipulative; instead it comes from a truthful place, a unifying one.

To call it calm or calming would be misleading. But it does feel meditative, which brings me back to the sea and to breathing. It feels as natural as a breath. The whole film is one exhale. While watching, the film gives so much and gives it so consistently that it’s like being in a dream. But afterwards it lingers; it’s something to ruminate on. Moments that recur within the film echo in the mind. Thus Moonlight is a cinematic gift that keeps on giving. A film for everyone to see. I went out of my way for it. Go out of yours.