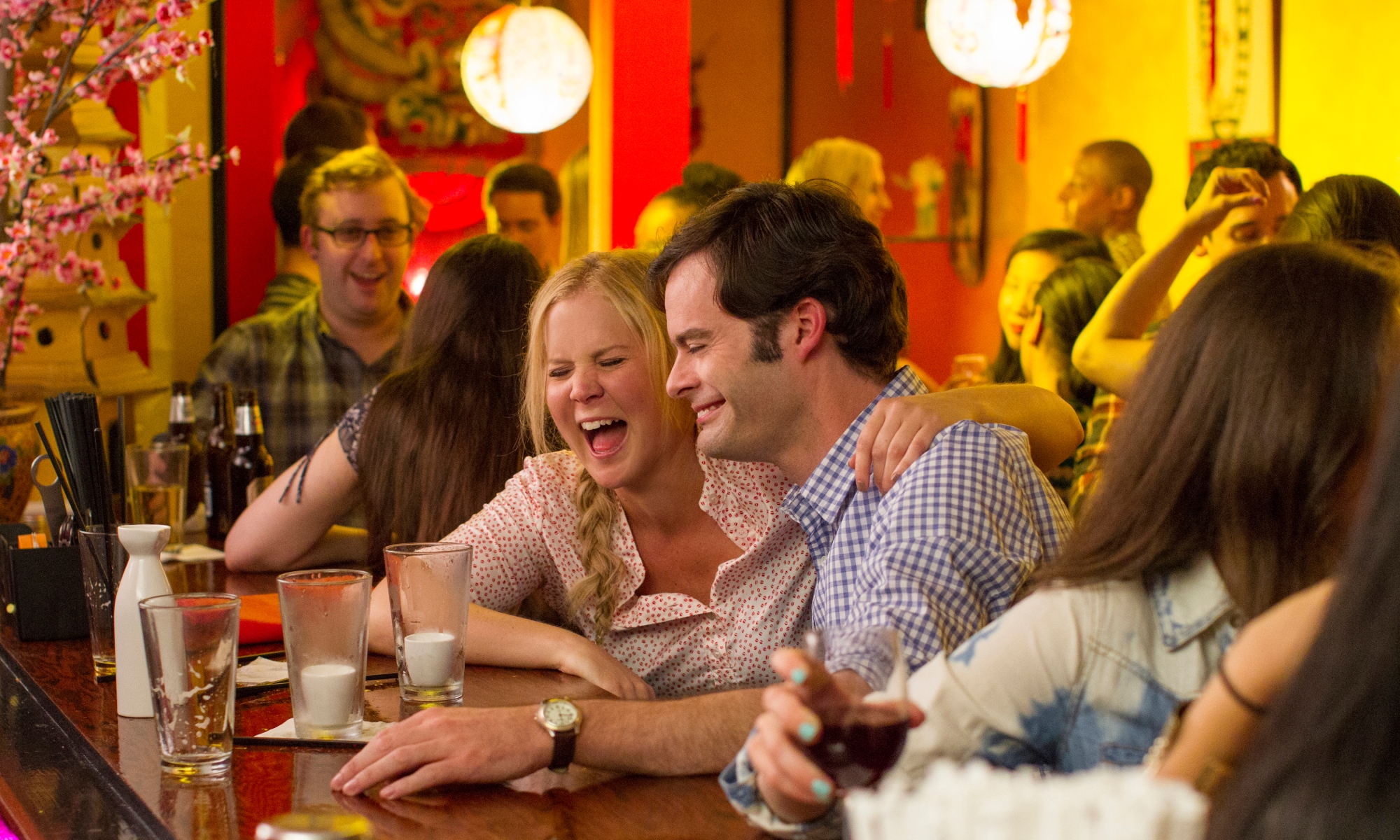 Amy’s father Gordon (Colin Quinn) offends everyone. He’s a racist, a homophobe, from all accounts a serial adulterer. Yet he keeps a collection of snow globes. Midway through Trainwreck we see Amy (Amy Schumer) sorting through these globes with a great feeling of nostalgia for them. It’s a well-judged moment of reflection and a key to the film at large in that it acknowledges that people rarely fit into the boxes that the Hollywood entertainment machine has built for them.

Amy herself defies expectations for what constitutes a strong female lead in a romantic comedy, and is a welcome breath of foul air in a landscape populated with ideals. Amy is not ideal and she’s the first to admit it. Petrified of intimacy thanks in no small part to the divorce of her parents at a young age, Amy bounces from man to man, gets hideously drunk, smokes pot, has talent as a journalist but not the gumption she needs to rise above her standing as staff writer for trashy magazine S’nuff (one bad cover away from being SugaRape from Nathan Barley). The movie’s title is directed wholly at her choices. But – and here’s the key, really – she’s not ashamed of these choices. She’s a flawed person and that’s who she is. Fuck you if you don’t have time for that.

Handed the job of writing a piece about sports physician Dr Aaron Conners (Bill Hader), Amy initially treats the assignment as a punishment. She doesn’t take it seriously. But she does add Aaron to the notches on her bedpost (or rather his; having men back to hers is a big no-no)… except, Aaron’s emotional availability and general good nature bring about something of a change in Amy. Suddenly there’s the prospect of a serious relationship on her hands. Cue mini-meltdown.

In essence, then, Trainwreck takes one of the staples of the rom-com and switches gender roles on us. Schumer takes sole writing credit on Trainwreck and her namesake is a great creation, one that she clearly relishes playing. In doing so she makes this ‘non-standard’ female lead seem more convincing than a boatload of her genre counterparts. And while not unprecedented, Amy and Trainwreck feel like something of a brave step coming from a major summer motion picture. A bold statement to redress the playing field and say, “Sup, bitches. It’s 2015. Let’s leave all that old hat behind.” Like we should’ve done years ago.

This extends to the men in the picture as much as Amy. Hader is great as Aaron, and he is consistently portrayed as sensitive and thoughtful (and just as flawed from time to time). His interactions with other males (chiefly basketball star LeBron James playing himself) are marked by their mutually caring attitudes. Maybe that’s supposed to be funny in and of itself because it goes against type. Instead it feels simply refreshing and more truthful.

And yet… and yet… As much as these things score Trainwreck some great points, the film’s eventual conformity to the rules and regulations of romcom plotting also slowly become it’s undoing. Roughly halfway through the film, if not long before, you’ll be able to see the eventual course of events coming. The upfront enjoyment of having a big movie flip expectations is squandered as it steers doggedly for safe ground the first chance it gets.

It’s also directed by Judd Apatow. Now, Apatow has a proven record for hit comedies that also find a ring of truth in their characters, but he’s also becoming known for a level of over-indulgence. A harsher attitude in the editing room would’ve certainly paid dividends for Trainwreck which pushes past the two-hour mark (making it roughly half an hour too long). The end result is about an even hit to miss ratio in terms of bringing the laughs. Schumer’s physical comedy as Amy works pretty much every time. Stilted scenes in which Aaron and LeBron argue over who’s going to pay for lunch, however, invite audience clock-watching.

There’s also something of a tonal imbalance. Many of Trainwreck‘s stronger scenes are devoted to Amy’s family life and how she perceives her sister Kim’s (Brie Larson) more conventional version of happiness. These scenes away from the hustle and bustle of Manhattan feel more like they’re taken from an earthier indie dramedy. The kind of thing with hand-written credits at the beginning. They butt up weirdly with Trainwreck‘s bawdier elements, adding to the rambling catch-all feel of the extended running time.

The end result is a film which feels front-loaded. In part because most of the stronger, funnier material is situated near the start, but also because, to begin with at least, there’s real promise for something different here. But for every hit (John Cena’s hilarious body-builder Steven) there’s an equally large miss (Tilda Swinton struggling to find the funny as Amy’s boss Dianna). And when the end result is, sadly, as generic as most other rom-com fare, Trainwreck starts to feel like a bit of a missed opportunity to really fuck some shit up. These are great characters for Schumer and Hader alike. Too bad they’re trapped in a vehicle that’s a little too afraid to come off of the rails.

One Reply to “Review: Trainwreck”