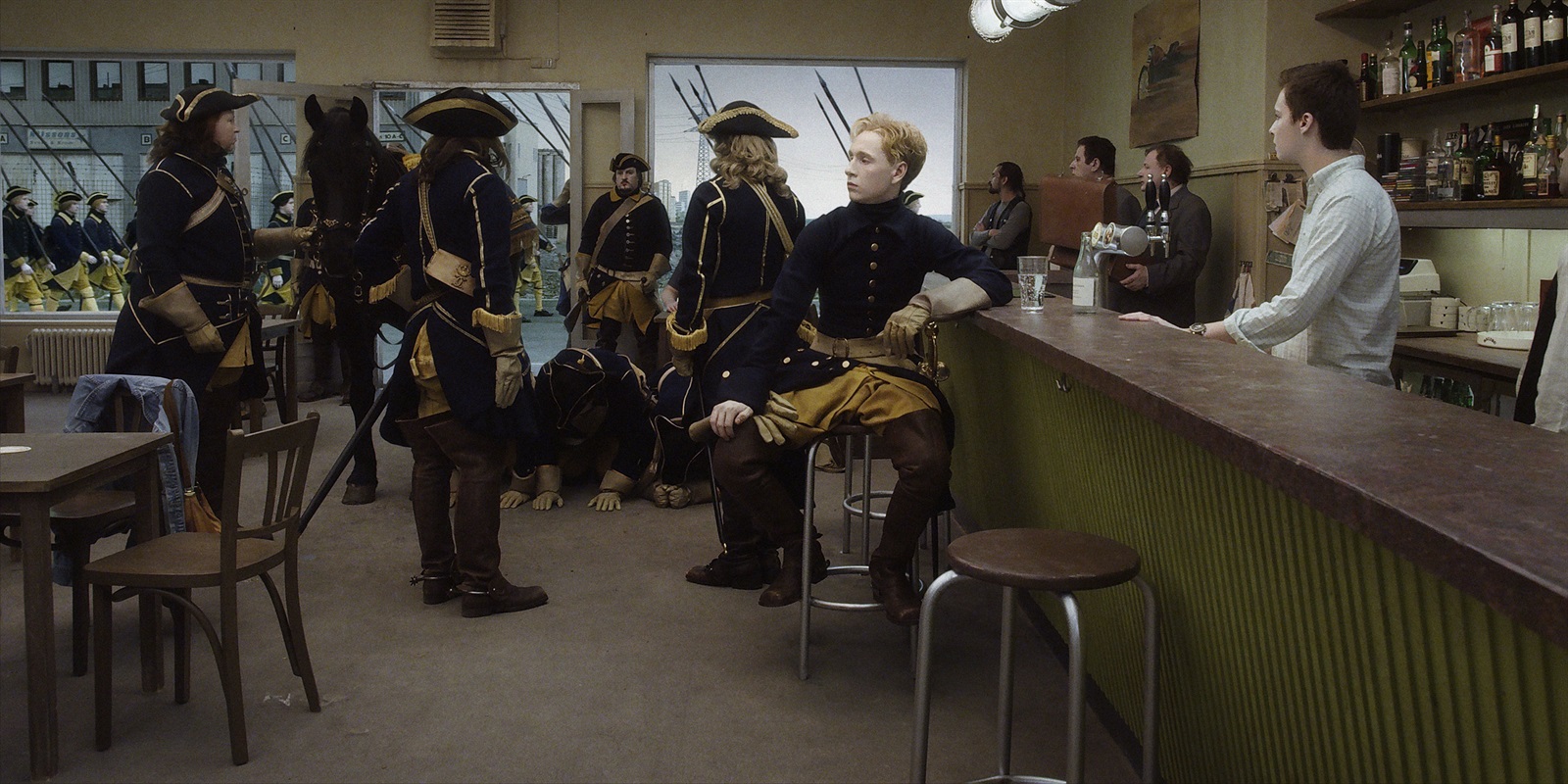 It was Mark Cousins and his epic documentary The Story Of Film which first made me aware of Roy Andersson. In one of the late entries in the series he approached modern cinema and spent a fair amount of time discussing Songs From The Second Floor in that magnificent lilting tone of his. With such exceptional, venerated praise I decided to check out this existential surreal-seeming film. And while I could see what Cousins appreciated in it, I struggled to share the same wild-eyed enthusiasm. The people I watched it with were far less forgiving. It kind of killed the evening, actually. Andersson’s work, perhaps, is not the stuff of casual movie nights.

This was a couple of years ago now. I’ve been meaning to revisit Songs frequently since and maybe even check out it’s follow-up You, The Living, especially when I read that A Pigeon Sat On A Branch Reflecting On Existence was being released to great critical fanfare. But somehow I never quite got around to it. And now Pigeon is here. It’s sneaked up on me. What I’m saying, quite laboriously, is that this isn’t going to be written as a comparison piece. I’m poorly equipped to say the least.

Pigeon is 100 minutes long, contains 40 shots and the camera never moves. That ought to have whittled out a few of you already. The opening text advises this film closes off a trilogy  about life, death and what it means to be a human being. As I’ve previously witnessed, Andersson favours quiet, contemplative exchanges between drably-clothed middle-aged men who all share the same calmly startled expression that suggests an airbag has just gone off in their faces. Paunches are commonplace. Beige is a constant. Pigeon begins with a far more rigid structure than it ultimately adheres to, initially offering us three examples of death.

In the first a man tries to uncork a bottle of wine and has a heart attack, his wife oblivious in the next room as she sings and runs what sounds like a blender. The second is a hospital scene in which a dying woman clings to a purse, insistent on taking her worldly goods to heaven. Lastly, we are confronted with a man who has already collapsed in the canteen of what appears to be an ocean liner; onlookers preoccupied with the question of what to do with the food he has already paid for.

These grimly humorous vignettes ease the viewer into Andersson’s style and prepare the viewer for what is to come; essentially more of the same. Naturally, Andersson follows these three vignettes up with a dance scene, upending the suggestion that this final instalment in his trilogy will be the most sombre. This dance scene, of course, is imbued with his evidently trademark absurdist humour, which runs like a vicious streak through everything to follow. Pigeon feels like highbrow sketch comedy, the kind you nod at for how clever it is, rather than laugh at how funny it is. And while non-sequitors make up a large part of the material presented, there are a couple of narrative through-lines, the most prominent of which follows the sad exploits of a pair of travelling salesmen peddling novelty items with little success. Most often Pigeon presents its cast of downtrodden characters in communal places of waiting (cafés, bars, bus stops), suggesting life is one long wearisome mezzanine. A series of pit stops with no actual destination.

A bar is repeatedly returned to, though in one of the film’s genuine highlights (and there are a few) we visit it in the year 1943 to witness a playful musical back and forth between a bar owner and her patrons. It brought to mind, inexplicably, the intermission in Holy Motors, if only for the  untempered joie de vivre of the scene. Elsewhere the most notable sequence takes place in a café visited by the two salesmen. They are interrupted in their usual pitch by the inexplicable arrival of Charles XII of Sweden and his cavalry who remove all women from the premises. The scene is likely over ten minutes long and quite the undertaking as countless men march by the café in the background, horses require wrangling etc. All the while most of the actors within the café remain static like some jaundiced wax museum that’s been overrun by the past. Andersson shrugs off how elaborate it all is. It’s as calmly matter of fact as everything else here.

As if to underline this fact, this extraordinary scene is followed up by a brief and deliberate palette-cleanser. Proof, if needed, that Pigeon and it’s ilk are not assembled at random. There is rhythm and reason to Andersson’s sequencing, even if the scenes themselves appear arbitrary.

After an hour or so sunlight is finally allowed into the picture at a simple beach scene. The morning light suggests a mild second wind for the film. Nevertheless the same aloof existential style perpetuates and the film starts to feel overlong, it’s ‘profound’ statement seeming to add up to little more than a chuckle and a shrug that, “you’ve got to laugh haven’t you?” Unfortunately, however, I’ve not been laughing. My reaction to Pigeon was largely the same as that when I encountered Songs From The Second Floor; it mainly expanded my ability to be patient.

Late on a title card that reads ‘homo sapiens’ leads us to a tableaux of a woman in a lab coat standing by a window as she talks on a mobile phone. In the foreground there’s a monkey, trussed up, being electrocuted. The image is the film’s most provocative, to be sure, but the joke is finally lost on me. Following this is a scene of such particular and elaborate artificiality that I can’t even accumulate the energy to sufficiently describe it. I’m a fan of the surreal, but it seems as though Andersson’s particular brand leaves me in the cold.

Thus, while I can appreciate Pigeon and I understand what it’s trying to do, I can’t say that I actually enjoyed it, or wish to partake in it again. Andersson’s framing is exacting and really quite flawless. But this appreciation alone can’t sustain my favour. I’ve seen other reviewers rave about this. I love that people love it. But it is an extremely acquired taste, and as such the score below reflects just how easily one man’s pleasure is another man’s poison.