Something’s been nagging me, and it only seems to be getting worse. Or, more accurately, more prolific. There’s been a lot of good poster art recently to lure people to part with their cash and go to the cinema, especially in the US. Teaser posters in particular are designed effectively to pique the interest of the casual moviegoer. Often to do this they employ an artful subtlety or insinuation of content. It’s essentially great advertising. So the film comes out, the main poster plays on the teased poster perhaps a little more directly and then, months down the line, the film reaches home release…

And everything goes out the window.

When it comes to home release the distributors suddenly seem to freeze up, panic-stricken, and play for generic as much as possible. Stick the lead actor’s face front and centre. Crowd the image with quotes and star ratings. Forget the art that lured people in to begin with.

Some examples? First and foremost, one of my very favourite film poster campaigns of recent years was for Denis Villeneuve’s Enemy. Below are a selection of the beautiful and creative designs that appeared in the run-up to the film’s release:

They’re all attractive, distinctive images that play to the doppelgänger theme within the film beautifully or play with the spider motif within the film. Each would look superb slipped around a DVD or blu-ray case, or better still a Steelbook (I’m a bit of a sucker for those). And yet… How does Enemy look now that it has been presented to UK consumers as a product to physically own? Well, it looks like this: 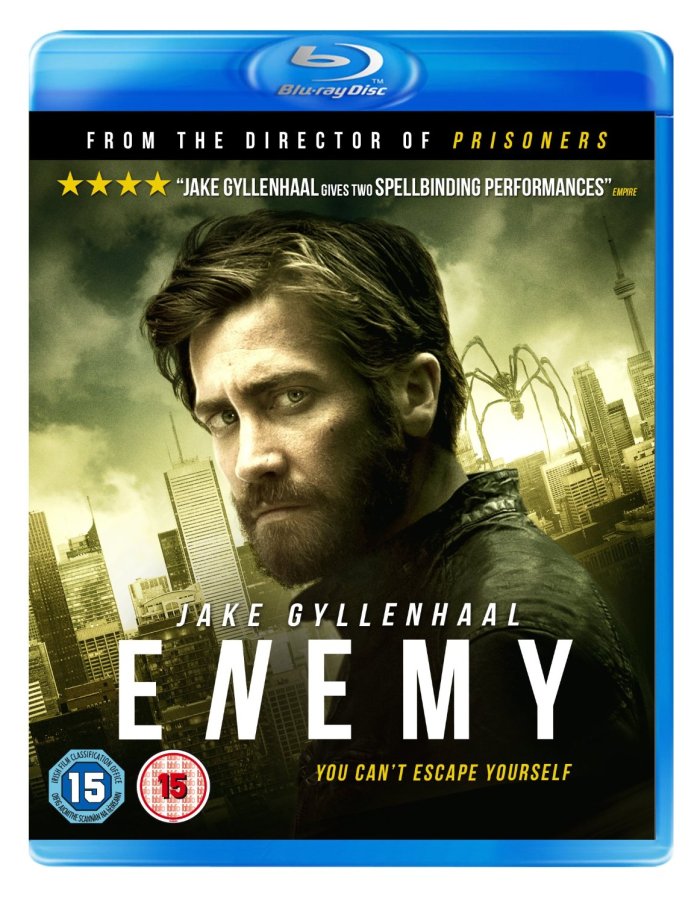 Okay, granted, this isn’t a disaster. The spider motif is still in there, but you have to admit that compared to the more artistic selections that preceded its home release, the final product looks a little flat and generic. A little too photo-shoppy. There’s very little here to distinguish the film as the bold, mysterious piece of cinema that it is. Ultimately, this feels like a bit of a let down, and one senses that it is because of a fear that in order for a film to sell at all we need to see the face of the star and read how good someone else thought it was in a soundbite. But it’s not an isolated incident, not by a long shot. Hell, it’s not even the only Jake Gyllenhaal movie to suffer this indignity at the moment.

For me not as beautiful as any of the Enemy teasers, but still a striking image. Now here it is on home release: 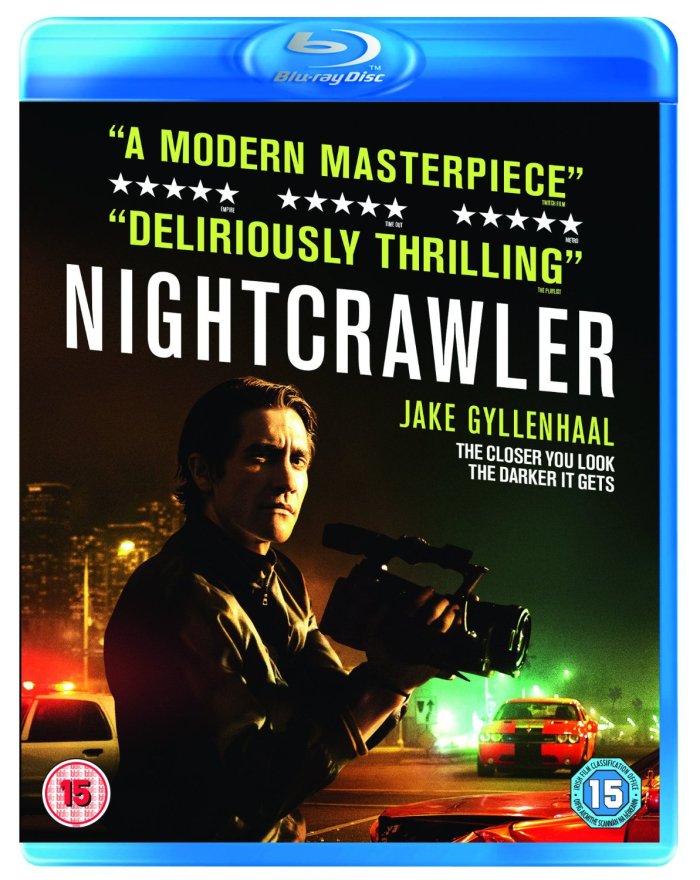 Seem familiar? It’s a bit busy. As with Enemy I don’t buy that the image of Gyllenhaal has any real relation to the skyline behind him. It doesn’t inspire the same confidence. And again the film within is dynamic, provocative, in short worth a more confident sell, one which doesn’t rely on stars and quotes to compel me to pull money from my wallet. Granted this design does echo a lot of the other posters that appeared in cinemas, but still. It’s generic.

How about Stoker? It went from this:

There are plenty more examples. Take The Guest, one of my favourite films of last year. It was teased with this delicious, simple, extremely cool design:

Here’s how it looks on my movie shelf: 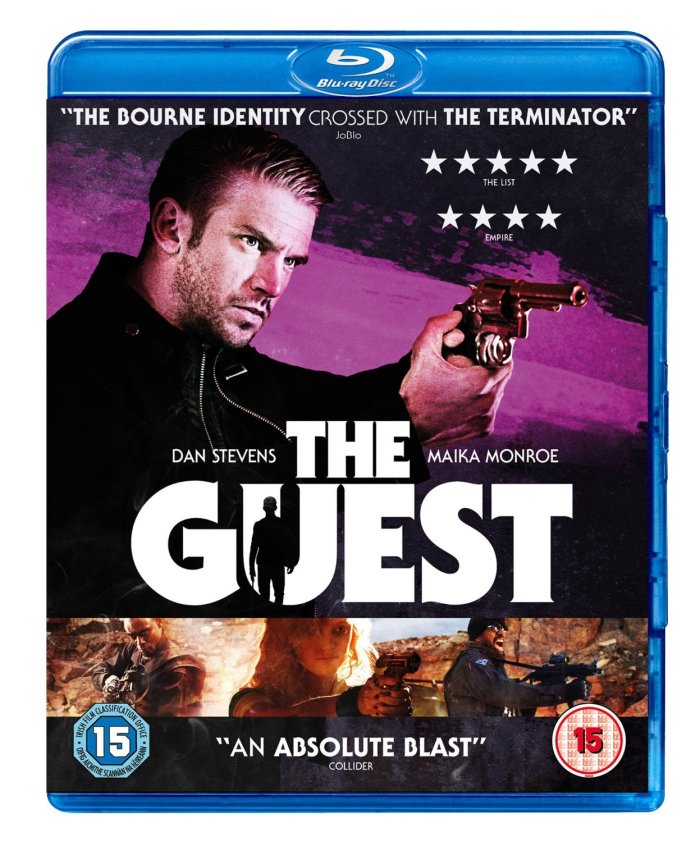 What the hell happened here?? The image of Dan Stevens is okay, I guess, though it suggests the movie is some Jason Statham-esque actioner, which it’s really not. The purple swish is kinda nice… but what’s with the strip of mini stills (another recurrent bugbear; see the Her art), plus the quote at the top is extremely misleading. That is not what the film is like at all. Really, this does the film a disservice. The people who saw it and loved it would probably have preferred something closer to the original art. And people who haven’t seen it are likely to feel totally misled. Adam Wingard’s previous film, You’re Next fared a little better for home release, I suppose. The blu-ray looks like this:

It’s fine, I guess. Looks like your typical horror release… Until you see how creative some of the original art was. For instance:

It goes on and on. Especially in horror. Kiss Of The Damned ran in the states with this poster design: 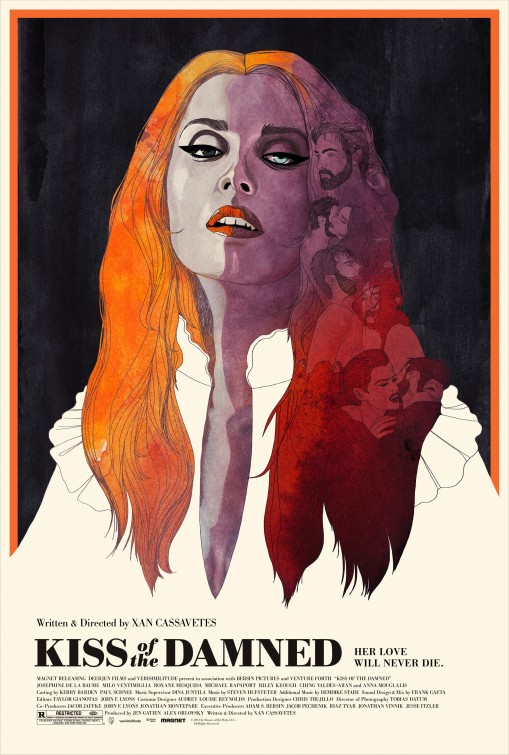 The more you look at it, the better, more intricate it is. But forget about that, because it hit UK shelves looking like this:

Just ghastly. A tired, tired assumption of what we want to see which lumps the film in with so many straight-to-DVD buys. You want more examples? Go talk to Ti West. Look at the art prepared for The House Of The Devil, The Innkeepers and The Sacrament in the US and compare those to the designs that wrap around the discs you can buy here in the UK. Over and over and over again you’ll see examples of original, interesting, even beautiful art being sidelined for what’s expected, what’s safe, what looks like everything else on the shelf.

I struggle to understand the reasoning behind this. Good artwork is a commodity. It should be treated like gold-dust. “YES! Look how awesome the art we commissioned for our movie turned out to be!?” At it’s best it becomes iconic. The poster for Jaws doesn’t have Robert Shaw, Roy Schneider and Richard Dreyfuss gawking at us under perfect artificially lighting, with a boat in the background and a quote from some long-forgotten magazine telling us how groovy it is. It would these days, though! Great art in advertising is distinctive. Please, distributors, help me out here. Don’t you want your movies to be thought of as distinctive? If sales are in a slump, if fewer people are buying home releases, doesn’t it cost more to commission additional artwork instead of using the great stuff you already have? And if your products end up looking as generic as some of these examples, do you really expect someone to turn over anywhere from £10 to £20 to see something that looks like they’ve already seen it before? Don’t you need to stand out on the shelves? How could it possibly hurt you to be thought of as bold, creative and interesting?

Other home distributors value the design element. They know there is a specific market who still want physical releases, so they invest in making them look good. Arrow Video, for instance, commissions wonderful new artwork time and again for their home releases, as well as giving the consumer the option of a reversible sleeve with the original poster art in there too. They understand one of the principles of the materialistic film enthusiast is his or her desire to own something tangible to do with their new favourite movies. Part of that, usually, is the aesthetic that comes with it.

There are good examples. Perhaps surprisingly, Warner Bros., one of the biggies, seems confident enough in its product to let them out looking exactly like their posters. Annabelle, Gravity, Pacific Rim, Oculus, the forthcoming Inherent Vice home release… all of these use original poster art. None of them display an actor’s clear face in the centre of the image, and most of them come without distracting press clippings littering their designs. And these are just examples from the shelf next to me. Bravo Warner Bros.

This isn’t a big deal. But it’s been nagging me. I do like growing my home cinema collection. I like buying blu-rays. I’m just a little tired of walking into my local entertainment store or browsing online and being confronted with the same set of uninspired images. Especially when I’ve been teased with so much better. Please, distributors, have a little more faith in the artwork that got me wanting to see your movies in the first place.