Extremism and hyperbole in film criticism are not often good traits, and will tend to get you dismissed as yet another loon trolling message boards shouting for attention. Moderation and fairness are better. Just a few days ago I posted a scathing review of Foxcatcher, giving it the joint-lowest score I’ve ever handed out (putting it in the pleasurable company of Ender’s Game). As the film has settled, I’ll admit that it is a little better than a 0.5 (a little), yet the mark stands as a testament to how much I solidly disliked the experience of watching it. Why bring this up at all? Because now, my very next review, sends me careering off to the other extreme. Whiplash is getting full marks. So much for moderation I guess. Throw me in with the loons.

Or maybe not. Because go and see Whiplash (and I’m going to try hard here to convince you to do just that), and hopefully you’ll see where I’m coming from. Hopefully you’ll experience the same intense entrapment that I felt whilst watching it. For 107 minutes there’s just you and the film. There’s no world outside. That level of absorption is what all filmmakers dream of achieving. Maybe, just maybe, I’m not shuttling from one extreme to the other. Maybe Whiplash is the real deal.

Confined, for the most part, to the dark-hued rich interiors of the practice rooms at fictional American college Shaffer Conservatory Of Music in New York, Whiplash spotlights on young drummer Andrew Neiman (Miles Teller), an ambitious, arrogant loner who goes to the cinema with his dad (Paul Reiser), yet otherwise is consumed by his passion to become the best in his field. When he’s not practising he’s listening to his idol Buddy Rich. The film opens with him being ‘discovered’ by Terence Fletcher (J.K. Simmons). In the leanest manner, director Damien Chazelle informs us immediately of the reverence the students have for Fletcher; if he’s noticed you, you’ve made it to the next level as Shaffer. Fletcher has noticed Andrew. He pulls him out of a lesson. That scene is one of the first indications that, while Fletcher’s opinion carries weight, his methods are cruel, if not downright psychopathic.

Joining Fletcher’s class, Andrew is struck by the downcast eyes and quiet, stifled anxiety of his classmates. By the end of day one (from the beginning of which Fletcher is already playing psychological games), Andrew understands perfectly where this intense level of intimidation in his peers has come from. Fletcher is to the instruction of music what Gunnery Sergeant Hartman was to basic training in Full Metal Jacket; a thunderously loud, abusive and terrifying presence. He expels insults wrapped up in taboo humour that strike like spears designed to wound. He is offensive and totally unapologetic. A friendly conversation with Andrew in the halls latterly becomes the gathering of fodder for Fletcher to use against him; the instructor keying knowingly into Andrew’s weak spot – what his family think of him. 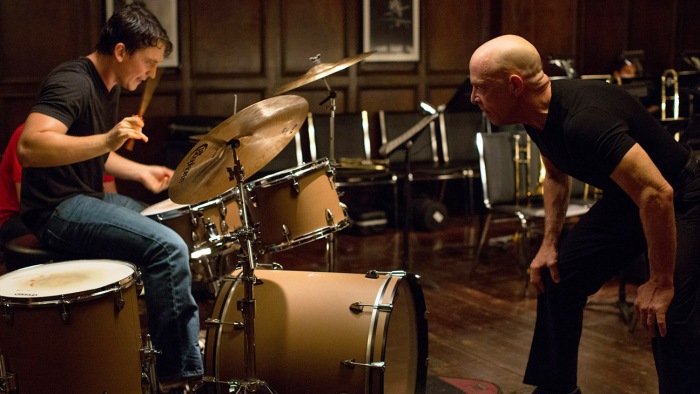 To call J.K. Simmons’ work here a revelation is, I think, just about fair. The man’s been one of the finest character actors in American TV and cinema for a very long time, yet this is the role he will surely be remembered for, and anyone else pining for a Best Supporting Actor award this year can start measuring their expectations accordingly. A late (and somewhat on the nose) exposition scene sees Fletcher explaining the motivation behind such cruel and extreme punishment of his pupils; and you can see his point. The scene even works well to round the character, add shade and context (something Chazelle is commendably concerned with). Fletcher explains that to provoke the best, the legendary, you have to be prepared to push people beyond what’s ordinarily expected of them. Yet the method is torturous and debilitating. Andrew’s reaction to it, however, is part of what makes Whiplash exhilarating; as much as Fletcher scares him, his abuse is exactly what Andrew seems to need to spur him on. His family either don’t understand or are indifferent to his chosen path. Andrew rises to Fletcher’s challenge, basking in approval when earned, but also reveling in his own martyrdom. There’s a dangerous back and forth between them.

This would fall apart if Teller weren’t up to the task. Simmons may be grabbing the limelight for his blowhard performance, but Teller is every bit his equal, turning this mental duel into riveting stuff. He portrays Andrew with some of the diffident arrogance of a young Dustin Hoffman, though where Benjamin Braddock was disaffected, Andrew is all business. Even matters of the heart are secondary. The film features a slim B-story in which Andrew courts cinema employee Nicole (Melissa Benoist). Though relatively sidelined, this aspect colours Andrew’s life away from the session rooms. Chazelle again adding texture and context. When it comes to the drums, Teller convinces. The guy clearly put in the work for the part, making the difference between him and any professional insert shots impossible to discern to the untrained eye.

The third significant player in all of this is director Damien Chazelle himself. This is an incredibly accomplished feature debut. Clearly a labour of love (Whiplash embellishes a short already under his belt), and notably more balanced conceptually than some of his prior screenplay work (The Last Exorcism Part II anyone? Or how about Grand Piano‘s far-too-high concept?). Chazelle’s own history as a would-be musician is a boon to the film. It smacks of authenticity (even autobiography?). Behind the camera, Chazelle – who turns 30 this month – keeps hold of the picture effortlessly. He confines us almost always to interiors, bottling up the film, distilling its power. He’s also keenly aware of tempo. Just as Whiplash seems to be getting away from him at the end of the second act, Chazelle reveals he was only regrouping before shooting for the stars with an astonishing curtain call. He has the nous of a showman and paces his work accordingly. When the credits start crawling it’s hard to resist the sense that a standing ovation is expected.

The perverse psychological back and forth between Andrew and Fletcher will no doubt be one of 2015’s greatest, most twisted cinematic partnerships. While Chazelle’s vice-like grip over his audience will hopefully resonate as another. The film itself opens up challenging questions about where the motivational becomes the sadistic, and if the subject is as equally prone to masochism, where do you draw the line? How much pressure is too much pressure? Call it extremism, call it hyperbole, but the first truly great film of the year has landed. Good job, everyone. Good job.