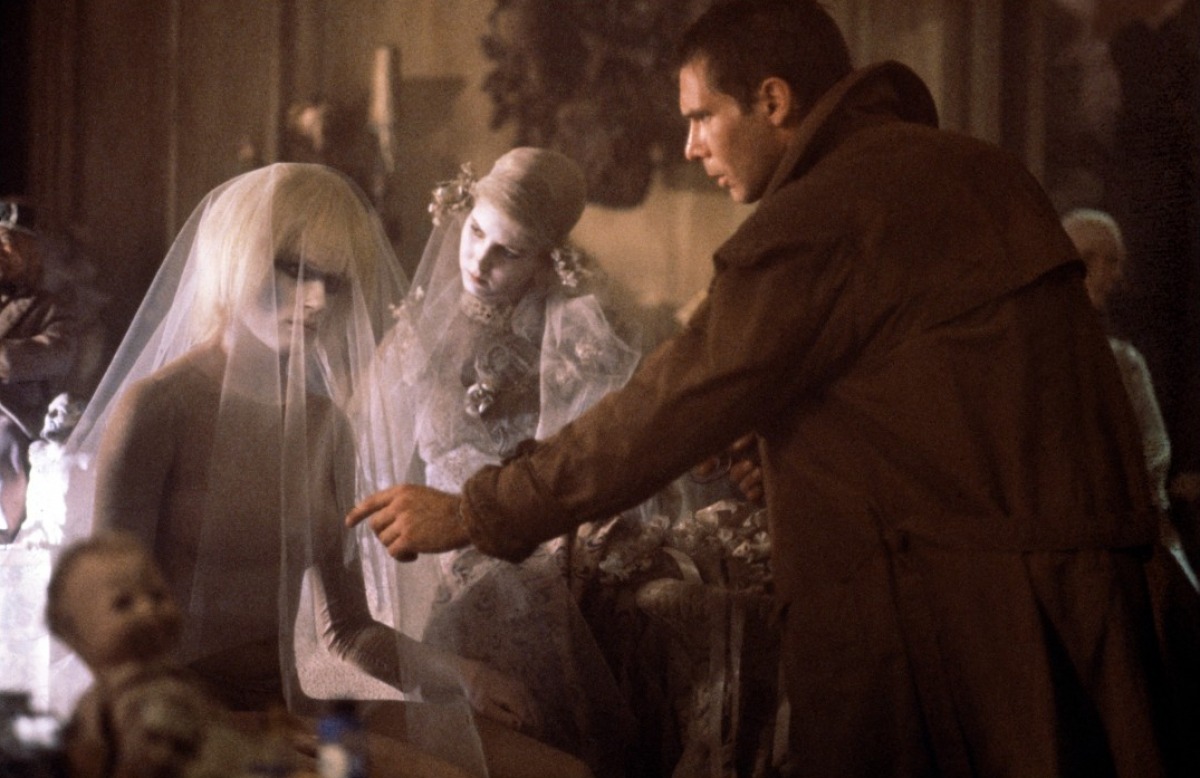 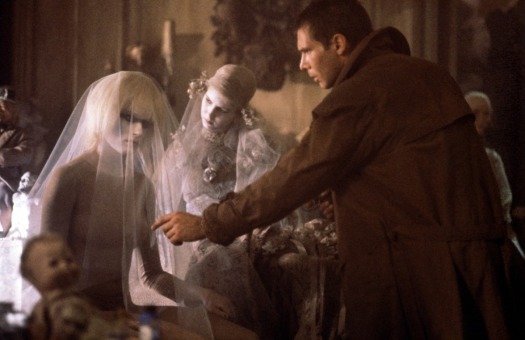 Ridley Scott’s brand of science fiction is wet. Wet in the sense that it is slippery; it glistens, shimmers. Water plays a key role in defining the aesthetics in both of his early masterpieces; Alien and Blade Runner. In Alien water coursed through the commercial towing vehicle Nostromo. The exquisitely designed corridors of the lower decks were wet from use, from condensation. So too, of course, was the star beast itself; the moist epicentre of the film sees Brett (Harry Dean Stanton) glaring into its slobbering jowels, immediately after we’ve been treated to a sensual beat in which droplets patter on the brim of his baseball cap.

Blade Runner is even wetter. Set in Los Angeles circa 2019, Scott depicts a future cityscape where it never seems to stop raining. Showers fall, shimmering in the neon of the illicit street signs, while at the film’s breathtaking final showdown between Deckard and Roy Batty, J.F. Sebastian’s home fills with rainwater; basins and baths overflowing. Faces seem permanently slick from the downpours outside, clothing also. One wonders how heavy Rachel’s lavish fur is when we see her standing in a crowd of spectators shortly after Zhora falls.

Water supplements scenes everywhere, from the wet, gelatinous substance from which Leon retrieves a set of ice-cold, genetically grown eyeballs, to the boiling eggs Pris delves into later, mirroring Leon. Blood mixes with water, either pouring down Deckard’s face or smearing Zhora’s translucent macintosh. Water even features twice in the movie’s most famous line, improvised by Hauer. Tears and rain. No matter where you look, seemingly, it’s a key element for Scott in creating a fully realised and tonally consistent world.

And tone and design are vital to this film. Scott is an aesthetic director first and foremost. While Blade Runner marks, for me, he last truly great film, I’ll grant him his dues for how expertly he sets down and maintains a rigorous look and a feel for each of his features. Say what you want about Prometheus, it looks exquisite. Blade Runner is arguably the high point of his stylistic precision, influencing not just science fiction in the 80’s and beyond, but the fashion world, music, sensibilities in product design and advertising… you name it. Scott and his team invented the future and we’ve been trying to replicate it ever since.

Such is the evident importance of setting and mood to Blade Runner that, when you look at it, it’s really comparatively thin on plot. Deckard’s ‘investigation’ into the whereabouts of the rogue Replicants is rudimentary at best, and the story doesn’t concern itself with the traditional corkscrewing of noir (and Blade Runner is most definitely a noir). Instead it luxuriates in moments, environments, atmosphere. Deckard nursing a whisky or dreaming of a unicorn is just as if not more important to Scott’s overall intent here as the slaying of one of the Nexus models.

Earlier today I had to fortune of seeing Blade Runner on the big screen for the first time (a major title now crossed off of my cinematic bucket list). It was the 2007 Final Cut, for those who care. I’ll not debate which of the film’s many versions is the best here, aside from to concede that, like many, I’m not a fan of the narration thankfully long discarded by this point. I’ve not seen the film in a little while, I feel, and such a great canvas brought out its strengths like never before. Whether it’s the definitive version of the film or not, this was my favourite Blade Runner experience, and it was the little details that continued to surprise and reveal.

I love how the film devotes time to the physicality of Deckard. We see him eat, drink, bleed. His humanity – called into question from the very beginning – remains a major player, whether it’s in the forefront of the viewer’s mind or not. I think often of the scene with Rachel in the apartment when he lets the blood run from his mouth and feels for missing teeth (again over a basin). Moments like this keep the film’s unanswered question about his true nature alive. Later we see Roy Batty, struggling against atrophy, puncture his hand with an old nail. That same tactile physicality is here. The Replicants are not mere robots; they are flesh and blood and feel pain. They are water like the rest of us.

The production design and it’s contribution to the overall tone is astonishing. Consider the inside of J.F. Sebastian’s expansive home (signalling the uncharacteristic space of Blade Runner – while streets are crowded, interiors are not; the building is not over-populated as it is suggested that those who can afford to have left for the Off World colonies; Earth is slowly being abandoned). There is a strong sense of the old and new colliding in Sebastian’s home; the antiquated architecture versus his own Gapetto-like proclivities as a genetic engineer. It echoes the old and new at the heart of the film. Flesh and blood humans, products of evolution, versus the tottering first steps of our own products; the Replicants. More pointed than this is the role the building plays in the final showdown. It’s decrepitude echoes that of Roy Batty as well as the mortality of the outmatched Deckard. As Batty runs down the clock pursuing Deckard, so the old building sags and dies around them, drowned in Scott’s endless rain.

Scott’s film is paced superbly. It may not rush through its moves – indeed it luxuriates in the breathing spaces between action sequences – but this very languid, liquid approach makes it positively fly by. I’m a nightmare for clockwatching during movies when they’re not engaging me (not literally – keep your phones off in the cinema, guys), yet the near two hours of Blade Runner always speed by, so rich and detailed are the images presented to me. Nearly every shot of the film has some iconic element to it, each scene its special diamond moment to take hold of.

People call Blade Runner dour. I’m not sure where they get that from (is it as prosaic as the ever-present rain?). Sure, it keeps to a resolute tone throughout, but the film is not without humour. Deckard’s visit to Zhora is as close to an out-and-out comedy scene as the movie gets; but it is not the only smirk to be found. The script is frequently witty, while Rutger Hauer casts Roy Batty as a particularly comic grand villain. His pantomime affectations actually increase how sinister he is, and how sad. Yet I most concede, happily, that Blade Runner is, first and foremost, a contemplative experience, rich and layered in the existential conversations it provokes, the likes of which have been covered extensively elsewhere already.

From the stunningly realised set designs (both interiors and exteriors, and those exquisite models and composites that open and run through the film) to the costumes, to Vangelis’ pitch-perfect era-defining score, Blade Runner reaches out to the viewer. Even if you’ve seen it at home a hundred times, you haven’t seen it in a cinema. For those who love it, please try to do so. Seeing it this way, at last, I wanted to climb through the screen into the picture, piercing the liquid film of its surface. I wanted to plunge into this vision of a compromised, beautiful, drowning future.

Basically (and perhaps a little crudely), I wanted Blade Runner to make me wet. If Blade Runner is reaching out to the viewer, then I’m reaching back.