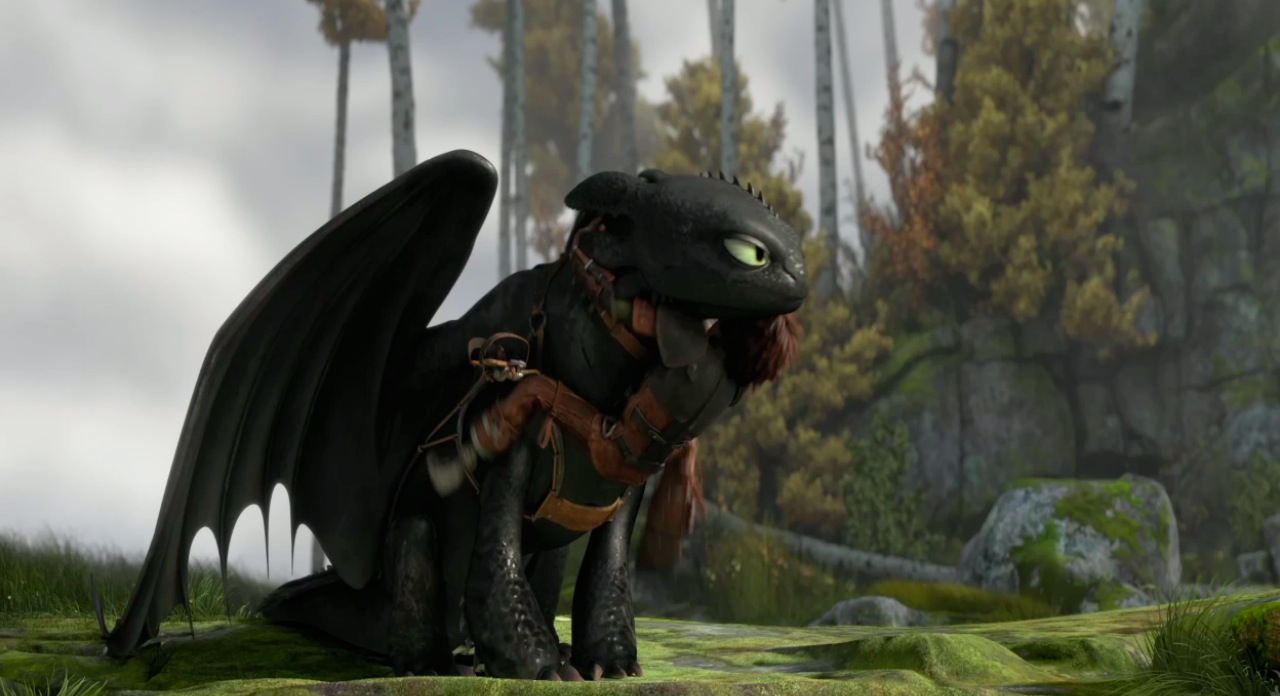 How To Train Your Dragon was one of 2010’s very best surprises. Dreamworks’ animated output up to that point had done little to particularly bother the competition elsewhere, nor garner much praise from critics, yet Daniel DeBlois and Chris Sanders’ adaptation of Cressida Cowell’s series of children’s books scored them a word-of-mouth success, even as the film’s creators played fast and loose with the text. As has been mentioned previously, I’m not usually taken by American CG animated ‘toons, but even my stony heart was warmed by this tale of a boy and his dragon – the instantly iconic cat-like Toothless.

Now, four years on, we get the inevitable sequel; a welcome sight in an otherwise spotty-looking summer season. This time around DeBlois is the only one at the helm, and he’s taken sole writing credit also. This, then, is his baby, and you’ve got to give him credit for building feverishly on what has gone before, eagerly expanding the first film’s universe.

There’s an urgency about How To Train Your Dragon 2, at least, to start with. We begin as before with Hiccup (Jay Baruchel) narrating our (re)introduction to the viking land of Berk, but even this formal piece of storytelling is swept away in a frenzied, fun little action sequence in which several of the young characters from the first film are caught up with while tossing sheep in a game of dragon racing. What this sequence teaches us quickly, and this is fairly uncommon for the genre, is that time has passed. Our characters have grown up some. Hiccup, Astrid (America Ferrera) and co. are 20-year-olds now; they’re the up and coming generation, poised to take the helm (figuratively and literally) from the elders who were previously their protectors. Indeed, How To Train Your Dragon 2 is greatly concerned with Hiccup’s reluctant steps from boy to man.

There’s no letting up as DeBlois eagerly expands the horizons. Hiccup and Toothless are off exploring new territories, searching for new dragon breeds. In doing so (as well as running from responsibilities back home), the two of them stumble upon another band of young vikings, capturing dragons on behalf of the sinister-seeming Drago (Djimon Hounsou).

DeBlois isn’t done building there, and a great deal of the first half of this sequel is preoccupied with gifting us new things. New places, new characters, new situations. New tone. This last is the most important, as DeBlois has crafted this adventure with The Empire Strikes Back‘s template as firmly in mind as the more sweeping, traditional fantasy tropes of Peter Jackson’s Tolkien adaptations. A darker second chapter is pretty much expected these days but even so, for a family film, HTTYD2‘s bleaker, colder heart is quite a step. As the rousing, dominant score frequently reiterates, things are getting serious now.

Drago has insidious motives that threaten the future of Berk (that he is the film’s only minority character is a prickly point), yet his presence in the film feels under-cooked. This could be because he is, for a while at least, largely kept from view, but it could also be thanks to the busyness elsewhere. Cramming in a surprising familial connection for Hiccup in the guise of dragon rearer Valka (Cate Blanchett), this cast of characters bursts at the seams. HTTYD2 starts to feel overstuffed.

What you start missing are the more intimate moments that made the first film such a cute little monster in the first place. HTTYD seemed to offer a slightly different perspective on things. It’s follow-up, though far more ambitious in many respects, is far more cautious in others; sticking to a largely formulaic good-guys-vs-bad-guys set-up. As such, when all the plot details are set in place, DeBlois’ sequel is curiously distancing. So much so that when a major tragedy occurs, it’s not quite as hard-hitting as it ought to be; it’s a telegraphed part of the story.

Now, as harsh as this criticism may seem, it’s worth noting that there are plenty of great things happening here also. With such a bloated cast, some characters ultimately get short shrift, but the family concerns at the heart of the movie are rather beautifully played. Valka is a great boon to the series, and the scenes in which she encounters Hiccup for the first time are among the movie’s very best. The strength of these moments counter that lacking feeling in others.

On a technical level, HTTYD2 displays noticable advances on its predecessor, from the sheer spectacle of the battle sequences (which were eye-popping enough last time around) to the finer details, such as the remarkably realistic snow effects, or the way the wind ripples through Hiccup’s hair.

It’s also worth saying, given that both Hiccup and Toothless are handicapped characters (not to mention a couple of the supporting players too), what a tremendously positive approach to disability HTTYD2 displays. Live action filmmaking rarely makes room for such a unlaboured, empowering depiction. For a family orientated animated movie to do so is very, very encouraging.

Speaking of family fun, as mentioned previously, this movie takes a turn toward the dark. Very young viewers may find one or two moments upsetting, especially when compared to the generally lighter tone of the first film. HTTYD2 still wears its PG certificate with ease, but it may be worth considering if your intent is to take the very young.

On the whole, despite the mechanics of the plot feeling slightly underwhelming, this sequel comfortably has more going for it than against, and DeBlois is clearly setting his sights on the already-confirmed third instalment. Wisely, this movie doesn’t merely feel like set-up for whatever’s next. It works well as a story in its own right, and successfully and significantly broadens the possibilities of what may come. It may not have the same magic as the first movie, but it manages to come up with enough of its own.