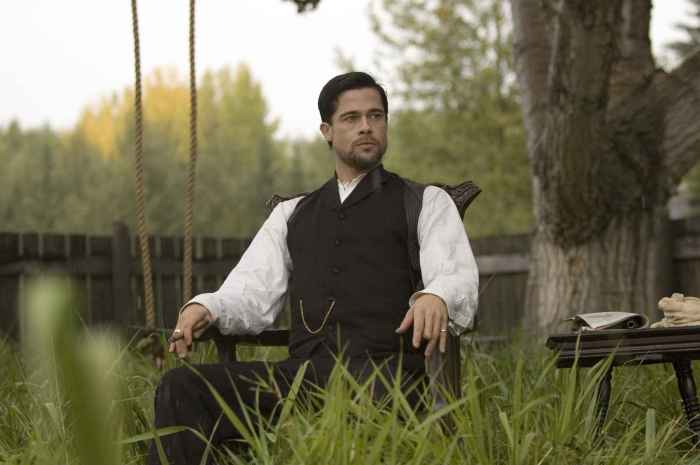 With my local cinemas stuck in a loop giving victory laps to the big award winners and new releases of note being left – by and large – off of the listings, it seems like a prime time for me to revisit another of my favourites. In this instance a film which, under different circumstances, would’ve deservedly romped it at the 2007 Oscars ceremony. Scuppered by the glut of notable films that appeared around it (deep breath now… No Country For Old Men, There Will Be Blood, Zodiac, Lust Caution, Juno, The Darjeeling Limited, Lars And The Real Girl, Control, Into The Wild, Eastern Promises, 3:10 To Yuma and more), Andrew Dominik’s lyrical western suffered in a busy year. If it had found release either a year before or after, it’d have had little to no competition.

But such is the dumb luck of these things. The fact that no Oscars hang from the film’s neck does nothing to damage its appearance as one of the finest movies of the past decade. Make no mistake, The Assassination of Jesse James by the Coward Robert Ford is a masterpiece. And I’ve damned near used up my ration of italics already.

Adapted from Ron Hansen’s rich novel of the same name and presented with sporadic narration from the silver-tongued Hugh Ross (is there a better piece of voice over in recent history? No), Dominik’s movie luxuriates over 160 patient but utterly necessary minutes. Cut from the cloth of the great epics of yesteryear, but without the bluster of modern movies – so quick to over-stuff their stories and add up to nothing (hi American Hustle) – The Assassination of Jesse James… is a film to revel in, as exquisite moments expand before you into breathlessly open spaces.

The unhurried pace may cause some to turn away, but it is entirely fitting. Dominik’s movie moves at the speed of its times. It is measured, intelligent, thoughtful. You wouldn’t rush a trip through a sepia-toned photo album, would you? No. You’d take each image in, savour it, look for correlations in photos around it. Dominik’s movie requests a certain reverence from its audience, then boldly rewards such an ask. Like Hansen’s book, it trades well on the spoilerific title; chiseling in to an inevitable event, building grave suspense over what we all know is coming.

The question is not what will happen, but how will it come to pass, and – more complicated – why.

A combination of elements make Dominik’s film a grand, beautiful one. First and foremost what strikes you is Roger Deakins’ never-better photography. Whether pitting the characters as tiny inconsequential figures playing out their fates in the grand scope of nature, or pushing in tight on an intimate conversation by lamplight, Deakins’ work is magnificent. Westerns have often played on the postcard beauty of their setting, but few equal the majesty wrought here, blurred out at the edges as if the whole truth might be too much for us.

Carrying these images, gliding them into one another, is a deftly judged score from Nick Cave and Warren Ellis (Cave even makes a cameo in the film’s extended epilogue). This kind of tale – romanticising outlaws, lamenting murder and ill-formed thoughts – is exactly Cave’s forte with The Bad Seeds. Working here without his lexicon of wry lyrics, Cave allows the music to evoke the perils of these extraordinary men, the plaintive themes keying into the sad sense of unavoidable doom.

All of which would be so much pretty dressing if it weren’t for the extraordinary performances that sear themselves into the memory. Pitt, a very good actor prone to playing big (a boon to the likes of Twelve Monkeys, a curse to the likes of 12 Years A Slave), is commendably, impressively restrained here as the insular Jesse James. Plagued by his own demons, Pitt affords Jesse James an element of culpability in his own murder, as though he had been waiting for Robert Ford to come along and fulfill a role he’d been having trouble casting.

But stealing the movie is Casey Affleck, whose reedy, weaselly Robert Ford wrestles up as much contempt as pity. It’s a fidgety, nervous, electric piece of acting, a white hot character study of a particular kind of obsessive mania; self-aware and riddled with uncertainty. Affleck’s Ford is maddening, wretched, achingly human. And while they are surrounded by extraordinary supporting players (check the list above which includes Lost Highway Hotel favourite Garret Dillahunt), it is the dance toward death between Pitt’s Jesse James and Affleck’s Robert Ford that always centres the film.

Ford is drawn to the James gang as a fan, casting Jesse James as a 19th century celebrity, a Robin Hood figure massaged by the media into a desirable shape. Ford craves the adventure of being part of the James gang, longing to exist in a world made fantastic by dime store novels. The grim reality is that, thanks to James’ paranoia and self-loathing, Ford has wormed his way into a rotten situation. Nerves are strained like a hair-trigger. We’re left at the mercy of Dominik’s unhurried pacing. He allows us to sink into the darkness with James and Ford.

In this latter section of the movie we find ourselves in the position of Ford’s plucky brother Charley played by the dependably brilliant Sam Rockwell, audience to an oppressive winding spiral. James and Ford are like two vultures circling one another. The majesty of the descent is quietly compelling. We see how the story resonates, absurdly, into our own modern world of celebrity worship that turns sickly sour, of stalkers and their venerated pray, and the burden and isolation of fame. How we all inevitably fail to understand one another, perhaps only knowing our motives after the fact…

There’s a maelstrom of things at work here, beneath the crisp, gorgeous surface of a movie that looks like a prestige picture but plays like a stone cold classic. Intelligent, emotive, sombre, shot through with scintillating brilliance.

Dominik followed the film up five years later with Killing Them Softly, a crime thriller around half the length which felt anti-climatic after this astonishing shot across the bow. Killing Them Softly is fine, but it’s failure to live up to the sense of timeless treasure here underlines how exceptional The Assassination of Jesse James is, how touched by providence. And while that providence may not have extended to a Best Picture statuette, it ought not stop the film from achieving the kind of longevity so many movies strive for, but few so effortlessly deserve.

4 thoughts on “Why I Love… #65: The Assassination of Jesse James by the Coward Robert Ford”