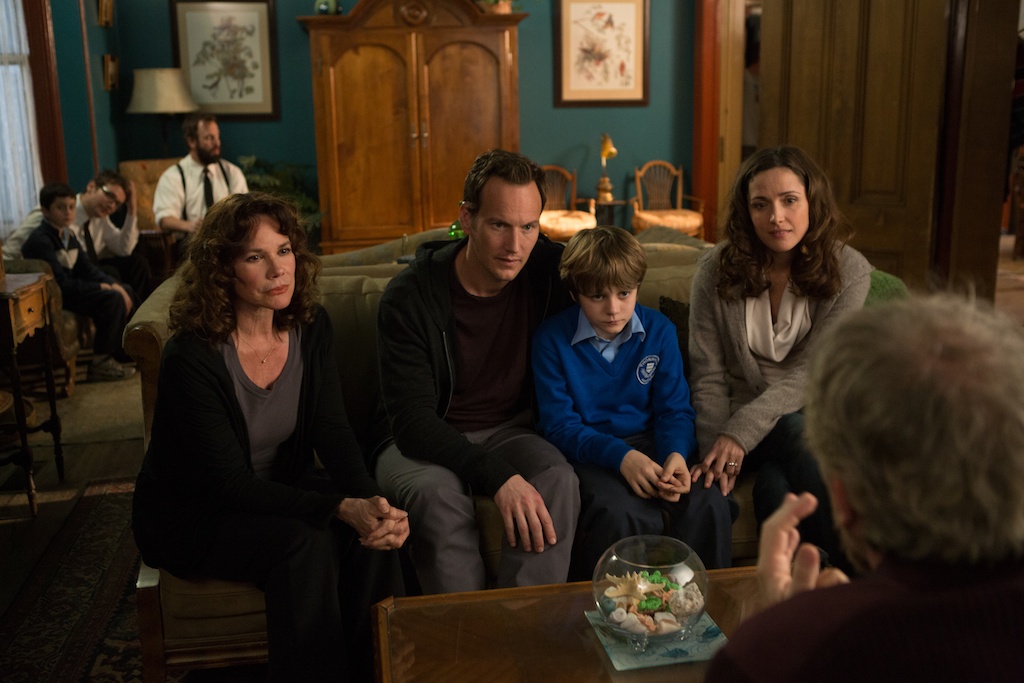 One of the most shocking things about James Wan’s Insidious was just how much fun it was. It popped up a couple of years ago amid the usual glut of also-ran horror movies offered by Hollywood and became something of an instant hit. A large part of that success (but at the same time the most divisive element) was the film’s unexpected lurch from efficient and spooky haunted house scares to more loopy multi-dimensional territory. Insidious offered us a peek behind the curtain into a mad supernatural world known as ‘The Further’. Along with other gonzo trappings like a gas-masked séance and a demonic presence that looked like Darth Maul’s kooky nephew, Wan and his writing partner Leigh Whannell successfully channelled an anything-goes mentality which made that movie glimmer just a little brighter than its competition.

Wan has hardly rested on his laurels since. Mere weeks ago his oh-so-serious The Conjuring drew crowds to the cinema for a far more traditional possession yarn, and now here’s the inevitable Insidious Chapter 2, released in UK cinemas on a Friday the 13th no-less.

We’re back with the Lambert family following the cliffhanger ending to the first movie. Though great pains are made to bring the audience up to speed, with some lumpen exposition and flashbacks to what went before, viewers would be well served to revisit Insidious before delving into Chapter 2. Having rescued his comatose son Dalton from a dark netherworld, it’s clear from the off that Josh Lambert (Wan regular Patrick Wilson) isn’t quite the same man he once was, and the mysterious death of medium Elise (Lin Shaye) looms large over the family as we catch up with them just hours later.

Seeking sanctuary with Josh’s mother Lorraine (Barbara Hershey), it’s not long before a sinister presence starts making itself known to the Lamberts all over again, as ghostly apparitions and troublesome strollers play havoc with everyone’s nerves. Digging into that same resource of sustained anxiety seen in the previous film, it falls to Renai Lambert (Rose Byrne) to shoulder much of the hard work early on as Wan starts building the unease from the ground up. Insidious Chapter 2‘s first hour is a rather discombobulated experience, as a seemingly confused and messy narrative is scrambled together in unusual fits and starts.

Gone is the red-faced menace from film one. Instead the Lamberts appear to be haunted by a gaunt mother-figure. Meanwhile, paranormal investigators Specs and Tucker (screenwriter Whannell himself and Angus Sampson) bumble around elsewhere playing detective, putting the pieces of a neat little mystery together, whilst also finding the time to play Most Haunted in a desolated hospital. It could all appear rather too convoluted and rambling, yet Wan’s film ties its narrative strands in tricky loops, and, as Josh delves darkly into Jack Torrance territory, Chapter 2 happily follows the same trajectory of the first movie… and goes batshit crazy.

In the downhill stretch to the finish line it all comes together rather pleasingly. We zip back into ‘The Further’ – all dry ice, deep shadows and red doors – and the disparate narrative starts coming together. There’s a satisfying sense of build and reveal this time around, making Insidious Chapter 2 as much a mystery as a horror film. ‘The Further’ is arguably put to better use here than in the first movie, allowing Wan to revisit scenes from earlier on and twist their significance.

It’s all utter nonsense of course, but that’s part of the package.This franchise’s major charm is how utterly nutty it is. The suspension of credulity is a prerequisite. Leave your sense of the rational at the door, because Chapter 2 is just as bonkers as what’s gone before. There’s a pleasing consistency in that, making this instalment feel like a natural continuation of the story, and not just a rehash. The Conjuring was underwhelming because it played its paranormal mumbo-jumbo with too straight a face. Wan’s more comedic, knowing approach here is far more successful. Insidious Chapter 2 is a theme park ride, and treats itself just as seriously.

All of which makes this film feel like The Conjuring‘s more superior B-side. Both have a preoccupation with spooky wardrobes. Both feature lavishly decorated houses. Both see a family fall victim to oppressive supernatural forces that like nothing more than to jump out at them. The difference here is a wicked and infectious sense of fun. Put simply, this is as much of a riotous guilty pleasure as Insidious was, making it that rare thing; a successful horror sequel.

So yes, some of the dialogue is naff and some of the performances are a little wooden, but Insidious as a series (and there’s strong evidence here that there’ll be at least one more of these) isn’t about believability or lofty notions of art; it’s about effective ‘boo’ scares and – simply – a good time. Wan seems to be growing more and more adept at putting together his jumpy moments, luring the viewer’s eye into the dark corners of the frame, asking us to look one way then jolting us from the other side. If Wan’s tricks are meant to be taken seriously – as they were in The Conjuring – it might occasionally feel cheap, but with Insidious he’s instead cast himself as an entertainer. It’s pantomime. Some people won’t like that, but frankly, the first movie ought to have weeded out anyone without a taste for it.

Insidious Chapter 2 offers loopy fun for anyone happy to leave their good sense at the door and indulge in a well-crafted, well-executed slice of absolute hokum. It ain’t sensible, but it’s all the better for it.