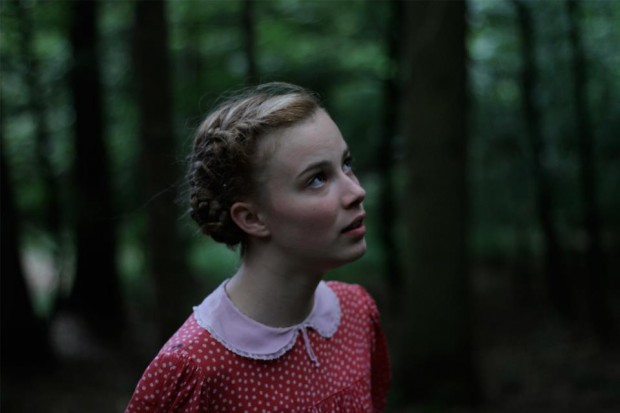 “Do you want to go to see a film and feel miserable? I mean really fucking miserable. Then for shit’s sake go and see Lore.”

At 1:30 this morning, and after a few drinks, I came home and decided, well, wouldn’t this be the perfect time to start my review of Lore? The above is what I wrote. Drunk, but not too drunk, I read it back to myself.

That would never get in. I would not write that at other times. I resigned myself to the fact that I’d be better at this in the morning, so closed the file and went to bed. And now it’s the morning and here it is still, unexpectedly saved and staring me in the face. That would never get into a review under normal circumstances… Trouble is, it can’t be faulted for honesty.

Lore, co-written and directed by Australian filmmaker Cate Shortland (Somersault) casts its gaze at Germany immediately after the Allies’ victory in 1945. Lore (Saskia Rosendahl) is the eldest child of four, brought up with the Nazi values, now guardian of her younger siblings and turned outcast. With their parents removed from the picture because of their complicity in Hitler’s atrocities, Lore is faced with a long, hard journey on foot to hopeful safe haven with a rarely seen relative. So Lore charts their path across a country torn apart and unable to suture its wounds.

Constantly fearful of capture, with a mewling infant amid their number and a very real threat of starvation, Shortland presents this trek as an unflinchingly dour odyssey of cold, uncomfortable hardships. Lore and her siblings stumble and scramble their way through a broken Germany’s dank bogs, drizzle-damp fields and eerie forests. It’s an apocalyptic presentation that even recalls The Road at times, except without that film’s important glimmer of hope. Lore offers precious little redemption.

What it does offer is a tough examination of a country and a people wrought by a collective grief, denial and belligerence. In a town Lore discovers a wall of photographs, the horrors of the death camps exposed in fierce black and white images. A shaming. In one photo she finds her father. Whilst others deny the evidence (claiming the pictures are staged by American actors), Lore takes the photo, but not out of disbelief or shame, but simply out of love. It’s her father standing there. Captured in that moment. A final connection.

Their journey crosses paths with that of a gaunt young Jewish man named Thomas (Kai-Peter Malina). Lore is suspicious of him. She’s been brought up to be. But when he lies to save them from American capture, Lore allows Thomas to travel with them. His presence is an agitator. Lore stands steadfast to her beliefs that, as a Jew, Thomas is inferior to them. When he risks his neck to bring them food, she divides it so that he can’t contaminate their share. It’s an ugly, thankless reminder of indoctrinated intolerance.

Sounding like fun yet? No? Well, nor should it be, really. This is a serious film about a serious subject. One which deserves to be addressed with care. Shortland’s film achieves this completely, there is no denying that, but it revels in the misery, indulging in a can-go-wrong, will-go-wrong mentality that makes for a gruelling 109 minutes. Shortland actually seems to be reveling in this hardship, codifying trauma. She is unquestionably a gifted filmmaker, and there are many startlingly beautiful images here, often captured in ghostly slow-motion.

Yet at the same time the palette is monotone. Lore is relentlessly grim. And whilst there’s honesty in presenting characters who refuse to change, and who bruise and blister and chap and make reprehensible decisions, Shortland offers us nothing else. Burgeoning sexual desire (inevitable in a coming-of-age boy-meets-girl tale such as this) is equated with trauma and psychological damage. Strangers are to be feared as they will exploit you without exception. Elsewhere, we’re treated to a lingering shot of flies crawling in a dead man’s blown-out eye socket. Max Richter’s largely sparse score rears up like a crazed horse let loose in a concert hall whenever something dramatic punctuates the bitter daily grind of survival. That’s the kind of film this is. Lore is here to make you feel bad about things that you should feel bad about. It’s weighty and serious and if you’re having fun there’s something wrong with you. Such punishment needs some reward.

So whilst it’s also brave to centre your film around such a detestable character (Lore remains, even at the end, something of a loathsome monster) it’s also, simply, not at all pleasurable. I cannot fault the performances. All of the children are remarkable. I cannot fault the craft. Post-war Germany is deftly rendered, its psychological scars bare to be seen. Full credit to Shortland for a sharply realised vision. But there’s not enough shading to Lore. This is overwrought, miserablist world cinema at it’s most dour. Fodder for those who paint all art house movies as joyless exercises. I just wanted to leave the cinema, but I stayed to the end. Was I rewarded for my perseverance? Not really, no.

So there’s that blunt opening line, still there at the top of the review. I haven’t removed it. Lore is that film.