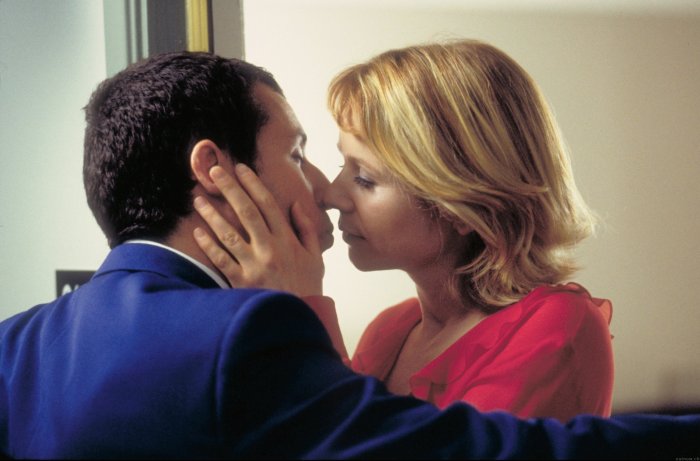 It begins with a man in a blue suit sat at a desk in a seemingly vast space. Barry Egan, a nervous, twitchy entrepeneur who runs a business selling novelty toiletries places a call to a company named Healthy Choice. They’re running a promotion for frequent flyer miles with their dessert products, and Barry thinks he’s discovered a flaw in their offer. Barry leaves the phone call because he is distracted. A noise outside. We’re in a sort of large storage warehouse on some industrial park in Los Angeles. Barry peers out into the world. It is calm… but threatening. Chaos quietly underpins the world, insidiously. Proving this, an SUV hurtles end over end and Barry jumps back. We, the audience, are jolted by the violent sound. Just as quickly a van drops off a harmonium.

Later the same morning Lena Leonard leaves her car with Barry to look after. They’re strangers, but Barry’s business is next door to a garage. We’ll find out later that this moment was pretense for Lena to make contact with Barry, but this small interaction, this threat of an emotional connection sends Barry into a tailspin. He steals the harmonium, flinching at his co-worker Lance arriving for the day. Why is the harmonium there, Lance asks. Barry doesn’t know.

After a brief flurry of pastel artwork (no actual title card is shown) we’re into the main of the feature, directed by Paul Thomas Anderson. Hailed in many corners  as one of the greatest American filmmakers working today (I’d have little argument with this), Anderson is better known for his epic, brooding tales of auteurs and pioneers (There Will Be Blood, The Master, even Boogie Nights). All great films, it’d be easy for Punch-Drunk Love to get lost in the shuffle. This is, after all, a small 90-minute rom-com, right? Hardly something that generally gets cited as a heavyweight. However I’d suggest it’s as impressive a film as any of his more ‘ambitious’ movies in its own curious, autistic way.

Made following the gargantuan Robert Altman-homage Magnolia, Punch-Drunk Love sees Anderson flexing himself creatively. It feels airy compared to the more studied, exacting features that surround it in his catalogue, and yet at the same time is remarkably controlled. The camera is forever creating new and interesting compositions. Robert Elswit’s photography is as beautiful as in any of his other movies. He and Anderson push Barry into corners, hide him in shadows, squeeze him into small spaces or leave him dangerously exposed in open ones. All of which brings us to Adam Sandler’s performance; a genuine triumph and a wonderful surprise.

Pick an awards-worthy actor and you’re unlikely to pick Sandler. He has his schtick, and a scattering of noteworthy films, but generally he’s become synonymous with some pretty bad titles, and some outright stinkers. Here however, he is a revelation, snubbed at the 2003 Academy Awards. Anderson channels Sandler’s anger-management routine into an emotionally fragile, frightened individual, henpecked his whole life by a barrage of sisters and extremely uncomfortable in his own skin. Whilst never particularly playing big, it’s an incredibly physical performance. Barry is tightly wound, always on the edge of the kind of chaos he shrinks away from. When he does erupt, it punctuates the film dramatically.

Jon Brion’s terrific original score percolates beneath him. It bubbles away constantly. Fidgety like Barry, it compliments and accentuates Sandler’s nervousness. We feel his tension, especially during a sequence at his work where, with his sister Elizabeth interrogating him, a phone-sex line extorting him and his co-workers suffering accidents, Barry seems beset on all sides.

Presented as one long take near the top of the film, Barry calls a phone-sex line based in Utah, but shies away from getting dirty. Where this could have been crude, it actually evokes awkward sympathy. Barry’s loneliness is there on the screen as he prowls the corners of his cold apartment. As much as he is afraid of intimacy, Barry yearns for it. That this sad attempt turns on him is another of the world’s cruel attacks. No wonder the poor guy’s afraid. However, when he starts to connect with Lena he finds a new strength, and when the boys from Utah come a-calling demanding money, Barry is forced to stand up for himself.

This is the shape of the film. It is a romantic comedy, but a particularly skewed one. Lena’s interest in Barry is a godsend as he would never have found her by himself. But she is not simply a saviour for him, she is a provocation in his life. Barry, consumed by self-hatred and insecurities, is allowed to feel as though he deserves something.

I first arrived at this wonderfully weird little movie on the big screen. Up until 2002 or so I’d been happy for films to come to me, broadcast on television or rented from local stores. However an increased interest and desire to pursue the less-obvious choices outside of the reductive blockbuster offerings led me to an independent cinema which I still frequent. It was a time of personal discovery, with the likes of Donnie Darko, Adaptation and this offering a ‘new’ perspective on American movie-making. The indie set.

Does this movie hold a special place in my heart because of this? Definitely. Is it the only reason? Not at all. Anderson presents here an alternative take on a tried and tested genre, poking curious holes in it as he codifies it. Punch-Drunk Love is as beautiful as it is charming, as unsettling as it is joyous. In retrospect you can see Anderson developing some of the tics and visual tropes he would build upon in There Will Be Blood and The Master. If you’ll indulge him, if you can see the human being in Adam Sandler’s damaged Barry Egan, then there is much to enjoy here, and many reasons to make repeat visits. A gem. And a must for anyone whose sense of the romantic is a little… off-centre.