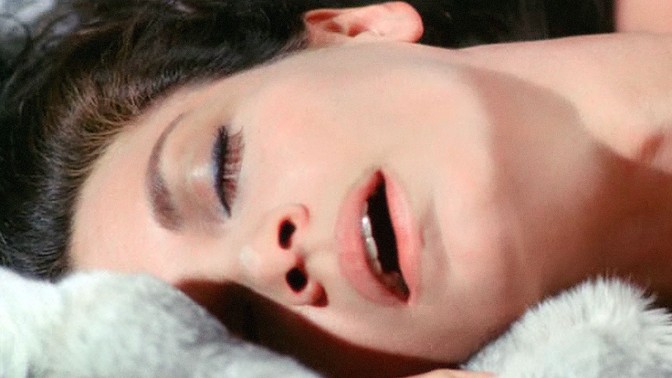 Lucio Fulci is an Italian director with a reputation for gratuity, gore and a career that veers in quality like a rollercoaster. I can’t admit to being well-versed in the man’s filmography, at least, not yet. Even the giallo genre remains an intriguing if largely unexplored territory for me, one which promises as much in the way of punishment as reward. How to separate the good from the bad? The laudable from the lamentable? From word of mouth and other articles I’ve received the distinct impression that, like Fulci’s body of work, there are hits and there are misses. Though wouldn’t it be wonderful if they were all of the striking quality of Lizard In A Woman’s Skin?

The giallo genre exploded in Italy in the 1960’s and 70’s. Named after the gaudy yellow paperback novels which inspired their stories; murder mysteries which, when translated to celluloid, promised illicit, explicit tales of intrigue and horror. I arrived at giallo the way I suppose many do – via Dario Argento. Fulci’s movie piqued my interest for its bizarre title as much as anything else, and I’m glad I took a punt on it. For what an extraordinary, hallucinatory movie this is.

On paper it sounds similar to so many other offerings of its time. Set in England, a middle-class housewife, Carol Hammond, is troubled by dreams in which she murders wild neighbour Julia Durer. Carol has become fascinated by Durer and the sounds of her lascivious LCD parties coming through the apartment walls. When Durer turns up murdered Carol becomes a suspect, and fights to prove her innocence, even whilst questioning her own involvement. Dreams and reality slip and blur, whilst a killer – knife-wielding, of course – remains dangerously at loose. Cue wooden acting, questionable dubbing (if you’re not inclined toward subtitles) and a few inevitable chases, right?

The film begins inside one of these dreams. Carol is aboard a crowded train. She is troubled, hurried, pushing through the claustrophobic train cars. Her expressionless fellow commuters are all nude, and then we’re in a strange negative space – a bedroom – and a seduction is taking place. Carol and Julia Durer are blown by undulating winds, their hair coiling, intertwining as they fall together to the bed. The wind blowing patterns across a fur coat like ripples across a field. A detached couple watch from a balcony. A world away from the world, yet rendered with palpable intensity.

The film never completely settles down from this heady beginning. Repercussions persist. When Carol tells her psychiatrist of the dream, Fulci focuses on her blouse fluttering from her increased heart rate. The film itself is in heat still, preoccupied. Carol’s life with her husband Frank is reserved, controlled. Julia Durer and her exotic counter-culture set represent illicit temptation. A family dinner is upset by the noise from next door, but Carol’s indignation is subterfuge; beneath the table her foot taps to the rhythm of the music.

And what music! Lizard In A Woman’s Skin is scored by the inimitable Ennio Morricone. And whilst he is best known for his spaghetti Western work with Sergio Leone, Morricone’s body of work is vast, and Lizard ranks with his very best. It’s of its time – fizzing with psychedelia and beat inspirations – but also eerie, haunting, omnipresent like Carol’s repressed desires. It is one of the key elements that helps raise Fulci’s film to a more intoxicating level, along with Luigi Kuveiller’s provocative photography.

Suspenseful chase sequences appear as predicted, but are anything but predictable. Panicky editing, shifts from dark into light, the threat of shadow, Morricone’s restless score – all are used to expert effect. Locations are also used well, from a spiral staircase with sharp risers through a vast auditorium, one sequence in particular prefigures a set-piece from Suspiria by seven years as Carol attempts a fearful escape by building a tower of luggage. There’s even a bat attack (better staged than Argento’s too).

And then there are the dogs. In a remarkably horrific turn, Carol stumbles across a room in which three dogs have been brutally tortured – trussed up like laboratory experiments. It’s a graphic and deeply disturbing image. Is it real? Is it a dream? Scarier than A Nightmare On Elm Street, Fulci presents us a world where nightmares can jump out at us in the waking world, irrational and merciless.

If there are further movies in its field that are as remarkable as this, I look forward to discovering them also, and welcome comments below if you feel you have a recommendation. Like The Bird With The Crystal Plumage (for me more-so), Lizard In A Woman’s Skin is a must-see for anyone with a passing interest in giallo, horror, or surreal cinema. Indulge yourself, and remember – it’s not real… is it?